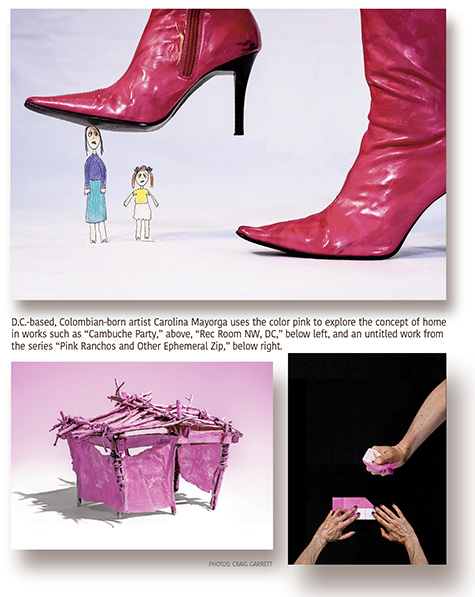 But D.C.-based, Colombian-born artist Carolina Mayorga cleverly applies the color pink to examine our notions of home and homelessness. She invites audiences to enter what she calls her “PINK-mented reality,” in which she uses her bicultural background to reinterpret temporary dwellings such as cambuches, or tent-like structures made from scrap material.

The resulting exhibit, “PINK Ranchos and Other Ephemeral Zip Codes,” on display at the Art Museum of the Americas, uses an otherwise playful color to tackle serious subject matter.

“‘PINK Ranchos’ is an investigation on issues of home and homeless juxtaposed to my conceptual and aesthetical obsession with the color pink, a color I’ve studied for the last eight to 10 years,” Mayorga said. “I apply the color to create a pleasing, even beautiful interpretation of the themes of my interest, usually of political and social content.”

Mayorga’s works offer a fascinating dichotomy, as she uses the usually cheerful pigment to create dilapidated, depressing structures. This visually pleasant color palate stands in sharp contrast to the meaning behind the works, which hint at displacement, dislocation, relocation, exile and eviction. Adding another layer to her work is the fact that the color pink is heavily associated with women and children, who often symbolize the concept of home.

“It is really hard to work on these topics and deepen into subjects that we would rather dismiss, forget and deny such as the experience of women and children, the most vulnerable and overlooked characters,” Mayorga said. “They face harsh situations and are usually the victims of war and violence.”

The project is the culmination of a yearlong investigation into the world of homelessness. Mayorga also relies on memories of her native Colombia and current life in Washington, D.C., to give an international dimension to her pieces.

Her artistic journey was inspired by a visit to La Guajira, Colombia, in 2016. During that trip, Mayorga witnessed extreme poverty, mostly involving abandoned women and children.

“As I became more aware about these issues, I began to find common experiences in other Latin American countries I’ve visited and even in my hometown of Washington, D.C.,” she said. “These observations led me to the OAS Inter-American Commission on Human Rights, where I found testimonies by women who share similar experiences of displacement, exile, dislocation and eviction caused by violence and war throughout Latin America and the U.S.”

Mayorga used excerpts of some of these testimonies as part of an interactive installation and performance called “Cambuche Party: A PINK Musical,” which was presented during the opening of the exhibit on Feb. 14. “Cambuche Party” featured three musical numbers inspired by life in cambuches and ranchos. After its world premiere in D.C., the exhibit will be shown in Colombia.

“There are elements in the exhibit that come directly from my experience of growing up in Colombia,” Mayorga said.

Examples include a piece called “Latin American Tejo,” a version of a popular throwing sport originally from Colombia.

“My native country has always been the source of inspiration for my work, but I also use my bicultural experience as a Colombian-American to look at issues in a more universal way,” Mayorga added.

A naturalized American citizen, Mayorga has exhibited her work both nationally and internationally for two decades. Her artwork addresses social and political issues, often serving as a commentary on migration, war and identity.

As far as new projects, Mayorga said that at the moment she is focused on her “PINK Ranchos” project as it branches out through related programs, such as collaborations with local artists, interactive community-based pieces, discussions and more.