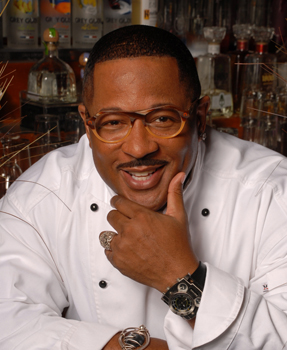 Spring has finally sprung and, despite the mid-April burst of chilly temperatures, believe it or not summer is just around the corner, with its long, hot days and warm evenings perfect for picnics and barbeques. Just in time, chef-owner Lance London has opened up his first D.C. location of the Carolina Kitchen in the Rhode Island Row complex in Brentwood, NE.

London’s Southern cooking-inspired Carolina Kitchen concept has been picking up steam after an initial setback in 2003 when the first restaurant, a carry-out in an office building in downtown Silver Spring, Md., fizzled out. He reopened two years later in Largo, Md., followed by another Carolina Kitchen in Hyattsville, Md., that’s twice the size of the Largo restaurant.

A local businessman, London was born in the District and raised in Prince George’s County. Though he began studying dentistry and marketing at Morgan State University, he soon felt the entrepreneurial pull and established a number of successful, and very diverse, businesses before finally heeding the call of the kitchen. The rapid success of his Carolina Kitchen brand and the growth of his comfort food empire — London has developed a new brand, TKO Burger, that is the beef lovers’ answer to Carolina Kitchen — proves just how well London understands what many people really want to eat, and how wise he was to leave the insurance business behind and follow his father’s footsteps into the restaurant industry.

Inspired by the authentic Southern cooking London grew up on in his grandmother Ma Pearl’s kitchen, he developed a versatile concept that honors his roots by marrying Ma Pearl’s down-home recipes with dishes from across the spectrum of Southern cuisine. The menu is wide ranging with a variety of homemade appetizers, soups, salads, sandwiches, and plain or fancy main courses. Some are familiar staples; others not so much. But they all require big appetites because while the dishes are not huge, they are hearty and substantial. You know you’re in for something special when the cupcake-like cornbread doused with honey and cinnamon arrives piping hot at the table. You also know you’re going to be very full by the time you get up from the table.

Although a lot of Southern food is fried, the fare at Carolina Kitchen avoids being excessively greasy. You can have your pick of fried okra, fried green tomatoes, sweet potato fries, onion rings, calamari and chicken fingers, and the fresh ingredients aren’t drenched in fried batter. For example, the catfish tenders — whole filets that are breaded and lightly fried — have only a hint of spicing that allows the fish to stand out. Most unusual of all these starters are the eggplant fries, which are delightful, but these are a bit on the greasy side. Pick several starters and you can sample all the different dipping sauces, which mix and match nicely. 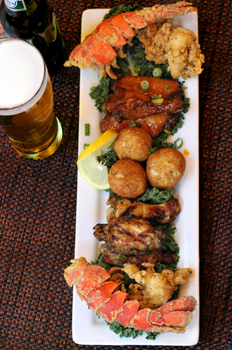 The main courses include many of Ma Pearl’s Cajun and Creole specialties such as the Creole-grilled salmon. A thick filet topped with lump crabmeat, shrimp and a New Orleans-style cream sauce is served with garlic mashed potatoes, macaroni and cheese and collard greens, rivaling anything you can get in that Louisiana mecca of fine Southern cuisine. The Cajun-grilled pork chop is simpler but equally delicious, with the pork particularly well prepared; a country version of the pork chops is fried and smothered in gravy. A complementary pairing of blackened chicken and fettuccini in a garlic, mushroom and white wine sauce also echoes the New Orleans influence and underscores the complexity and adaptability of Southern cooking as a whole.

Southern coastal cuisine is in abundance at the Carolina Kitchen with a raw oyster bar, crab claws and a wealth of shrimp dishes. A nice version of the by-now-ubiquitous shrimp and grits shares space on the menu with fried shrimp; firecracker shrimp; shrimp curry; kale and shrimp soup; and Cajun chicken and shrimp skewers. (The interesting variations on the shrimp theme remind you of that delightful scene in “Forrest Gump.”)

The menu offers more than a dozen home-style meals as an economical alternative to the more elaborate specialties. In addition to the old standards such as meatloaf, there are plenty of more unusual choices, including fried croaker and whiting, two fishes that are not often found in more formal restaurants. But with the fresh seafood the chef procures and the deft hand at the skillet, these humble dishes deserve special attention.

Classic Southern cuisine also makes an appearance among the many sides, including: macaroni and cheese, collard greens, baked beans, black-eyed peas, butter cabbage, candied yams, string beans, corn, potato salad and coleslaw. Each entrée comes with set pairings but staff have been flexible in letting customers swap things around so they can sample widely from the sides.

Not surprisingly, Southern favorites make their way onto the dessert menu as well, including red velvet cake, banana pudding and sweet potato pie made in the traditional style. Other classics have been updated. The croissant bread pudding, with orange, cranberries and a white chocolate Grand Marnier sauce, is superb. And for once, it may not be hyperbole when the menu brags that it has the best milkshakes in town. Carolina Kitchen’s shakes are not the thick kind that you can barely suck up the straw. They are just the right consistency to make your mouth work just a little harder than usual. But it is the flavors that rise above the crowd — nothing exotic or pretentious, but not what you might expect either. For instance, the peach cobbler shake is actually made with cobbler; ditto for the banana pudding and sweet potato pie shakes. The lemon custard shake, silken and sweet, is a creamy citrus dream.

Carolina Kitchen features dishes inspired by his grandmother, such as the Southern-fried pork chops.

London’s first foray into D.C. is huge. At more than 6,000 square feet, the Carolina Kitchen is a lavish palace of Southern cooking, full of quirky design elements that eschew subtly for their effect. London collaborated with Tom Mulhern of 2 Scale Interiors to design the contemporary country atmosphere that melds modern and rustic touches. The restaurant, which is broken into several dining spaces, includes a tunnel-like room with vaulted ceilings that is vaguely reminiscent of a futuristic subway station, as well as a second-floor mezzanine area watched over by King Kong and the long-suffering Fay Ray. The front of the restaurant offers seating in a more homey space that evokes a country kitchen, while an eclectic collection of vintage whiskey bottles, beer steins and a classic model car collection reflects London’s fondness for antiques. A full-service bar tucked away behind the tunnel room turns out classic and creative cocktails, a sampling of boutique and imported beers, and some nice wine choices.

While the Brentwood Carolina Kitchen is definitely a sit-down kind of place, it has a big carry-out section that can be as busy as the tables are. As the days lengthen and the outdoors beckon, it is a perfect place to pick up a bag of favorites to dine al fresco at the nearby National Arboretum or to enjoy some excellent comfort food in the comfort of home.

London has devoted his efforts to supporting the local community, which in turn is helping make his vision a reality. He has opened his newest restaurant in the rapidly revitalizing Brentwood neighborhood — one of many in an ever-changing city — while successfully staying true to his Southern roots. And Carolina Kitchen’s popularity speaks to the fact that while Washington has become a foodie’s paradise with discerning palates and pricey gastronomic tastes, it still likes good old-fashioned cooking, the way grandma used to make it.