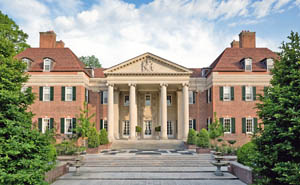 It seems almost blasphemous to compare the British Residence, whose stately halls have welcomed everyone from royalty to rock stars, to a workhorse. But Sir Peter Westmacott, Britain’s ambassador to the U.S., says this haven of refinement on Massachusetts Avenue was “built to do a job” — elevating Anglo-American relations — and it has done that job admirably.

The British Residence in Washington is hidden from passers-by in the street if they do not step outside into the garden, one of many interesting tidbits in a new book on the building written by British historian Anthony Seldon and Daniel Collings.

“Here we are in a house that is built for purpose. It’s not like most of the other great embassies, of which there are a number in the city, which were houses that were built by somebody else … for their own purposes and then bought by governments. This was built to do the job,” Westmacott told a group of journalists May 6 at the unveiling of “The Architecture of Diplomacy: The British Ambassador’s Residence in Washington,” a new coffee-table book chronicling the mission’s history and design.

“This is a house … which is a rather wonderful place in which to entertain friends and throw parties,” said Westmacott. Past visitors, for example, include dignitaries such as Winston Churchill, Princess Diana, President Obama and Hillary Clinton, who held her last dinner as secretary of state at the residence, as well as celebrities such as Elizabeth Taylor, Michael Douglas and the cast of “Downton Abbey.”

“But it is also a place which earns its keep by doing an awful lot of things … to promote relations between Britain and the United States,” the ambassador added, standing in the drawing room adorned with carved giltwood console tables and sumptuous gold-and-red sash window draping.

“We do stuff around Shakespeare, we do it about the Beatles, we celebrate royal babies, we did the Olympics,” Westmacott said of the various events held at the residence. “And we will continue to do that because to be honest, given the complexity and the cost of the upkeep of a place like this, if you don’t have an ambassador who’s prepared to make the house earn its keep and use it to promote the relationship and our interests, be they academic or cultural or business or political, then people are going to start saying well what’s the point of it. And the point of it I think is very, very clear. We try to bring it out in this well-written book.” 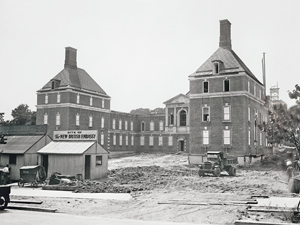 The British Residence on Massachusetts Avenue was originally built as an embassy in the 1920s and was designed by renowned architect Sir Edwin Lutyens to symbolize Britain’s growing relations with the United States.

The tome, written by British historian Anthony Seldon and Daniel Collings and beautifully illustrated by Eric Sander, is the first to explore the history of the residence, which was originally built as an embassy in the 1920s. Proceeds from the book go to Help for Heroes, which supports wounded British soldiers.

The ambassador’s wife, Lady Westmacott, spearheaded the project, having coordinated a similar volume on the British Residence in Paris, where the couple was posted before coming to Washington.

An expert on art history, Lady Westmacott told The Washington Diplomat that she was surprised nothing had been written on the subject before.

“When I came here, I did not realize there had never been a full-length volume on this residence and realized immediately that it was crying out for one,” she said, noting that “the marriage of the architecture and the diplomacy is a rather interesting way of looking things.”

The home and its elaborate gardens were designed by pre-eminent British architect Sir Edwin Lutyens, the master planner behind the city of New Delhi, and they are the only example of his work in North America. The ambassador’s living quarters and eight bedrooms are upstairs, while downstairs the ballroom and other spaces are used for events.

In 1960, a chancery was added next door to make room for Britain’s growing diplomatic presence in Washington, but the residence remains an important extension of the embassy, hosting some 15,000 visitors a year for functions ranging from small power breakfasts to glittering soirees. 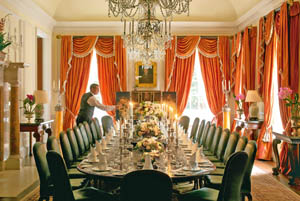 Candles are lit for a capacity of 34 guests in the dining room of the British Residence.

“I particularly enjoy the fact that it’s such a light house — light and bright,” said Lady Westmacott, reflecting on her favorite aspects of the residence. “It is incredibly well designed to catch as much light on both sides of the house as possible, so even on a dark day here it’s never dismal.”

The ambassador said he also enjoys the way the residence captures the natural splendor outside. When hosting an intimate breakfast or lunch, “I love putting a table on the terrace and just looking out the garden at spring or fall,” he said. That same terrace, incidentally, is where King George VI talked with American banker J.P. Morgan over a spot of tea in 1939.

Inside, the ambassador’s favorite room is the clubby library, “which has got wonderful wood-paneled walls and a tremendous sense of proportion…. It’s just a rather inspiring place to sit and work,” he said, citing a portrait of Prime Minister Winston Churchill, who reportedly relished visiting the home, that hangs over the fireplace (on a nearby coffee table sits a toy Rolls Royce that belongs to Westmacott).

Of course, the British Residence isn’t the only storied mission in Washington that boasts priceless art and artifacts — and Seldon’s book isn’t the only game in town. As the Washington Post recently noted, embassy coffee-table books seem to be all the rage. Italy, Turkey and France have all had books written on their historic missions, while the 2003 “Embassy Residences of Washington, D.C.” provides a stunning overview of more than 40 missions (co-author Jane C. Loeffler also wrote “The Architecture of Diplomacy: Building America’s Embassies” in 1998). 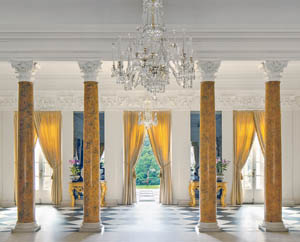 As a result of budget cuts during the construction of the British Residence, cheaper materials were brought in to replace the pricey marble intended for the columns in the sweeping ballroom. Knock on those “faux” marble columns today and you’ll still hear a distinct echo.

But the United States and United Kingdom are bound by a shared history unlike any other, reminders of which are peppered throughout the residence located a stone’s throw from the U.S. vice president’s home.

In the library, for instance, there’s a painting by U.S. President Dwight D. Eisenhower of Viscount Montgomery of Alamein, who was Eisenhower’s deputy during the 1944 invasion of Normandy.

“Given that Gen. Eisenhower and Gen. Montgomery didn’t get on,” Westmacott pointed out, “it’s rather extraordinary to have a painting done by the president while he was president … which hangs on my wall as a reminder of the special relationship from the Second World War.”

The visual emphasis on that special relationship isn’t surprising considering that the residence was designed to symbolize Britain’s evolving ties with the United States.

“The British government decided that it needed to make a bold statement about the importance of Washington and its relationship with America, recruiting probably the best-known British architect at the time,” the ambassador said.

“We had grand embassies in Paris and Germany and so on but this was something that was a coming of age in the relationship and an indication of just how much we had in common, which has been carried through to the present day,” Westmacott added, noting that America is far and away Britain’s most important commercial partner.

Over the years, though, that special relationship has endured its share of ups and downs, a past that is inextricably linked to the residence. When its doors opened in 1930, for example, the embassy may have been fêted as a sign of U.S.-U.K. friendship, but behind the scenes, the State Department was busy drawing up plans for a hypothetical war with Great Britain and its Empire.

From that low point came a long period of close ties that peaked in the early 1960s and were resurrected under Margaret Thatcher and Ronald Reagan in the 1980s.

And like today, even the finest embassies cannot escape fiscal realities. “Some things never change,” the ambassador observed, recalling the various hiccups during the building’s construction. “The accountants looked at the bill and said, ‘Oh my God, it’s going to be over-budget,’ so the instruction arrived to lop 10 percent off the cost of it.”

As a result, cheaper materials were brought in to replace the pricey marble intended for the columns and floor tiles. Knock on those “fake” marble columns in the sweeping ballroom and you’ll still hear a distinct echo. 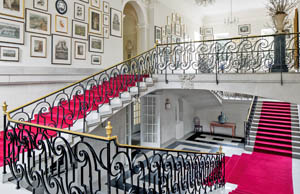 British architect Edwin Lutyens always conceived of his buildings in three dimensions, in contrast to the modernist placing of function ahead of form. Nowhere in the British Residence is his mastery of dimension and his generous use of space seen to better effect than in the dazzling grand staircase.

“So that’s really a rather wonderful reminder that public finances have always been difficult,” Westmacott said.

Builders may have cut a few corners, but the result was still hailed as “the finest embassy in the world” by the Washington Post, and it continues to exude a rarified luster that transcends its workman-like purpose.

Yet there’s also plenty of quirky charm hidden among these hallowed halls.

Amanda Downes, the British Embassy’s longtime social secretary, took reporters on a tour of the hidden gems in the house, including a door that leads to nowhere, opening onto a blank wall lined with hooks. “It’s the most useless cupboard,” Downes said, praising Lutyens’ subtle penchant for humor.

Nearby is an alcove punctuated by a dramatic circular staircase and Nigel Hall’s sculpture “Intension Extension.” Downes said most visitors head directly toward the ballroom and zip by this little treasure tucked away off the main corridor.

Asked to name her favorite space, Downes diplomatically demurred. “I just love the house,” she said. “It’s got a great feeling. It’s a very friendly house.”

Anna Gawel is managing editor of The Washington Diplomat.