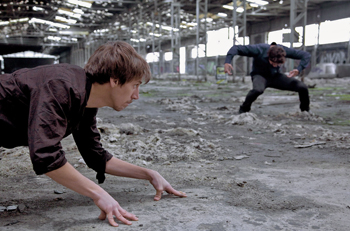 The performing arts duet “Entomo: Where Insects and Humans Come Together”

Latino influence on American culture is hard to escape, whether you find it in food, music, film or architecture. And though usually associated with America’s southern neighbors in Latin America, much of this cultural imprint can be traced back across the Atlantic, to Spain.

To help Americans — and others — better understand these origins, the Spanish Embassy’s Cultural Office is hosting a wide-ranging roster of events across the United States as part of the spring/summer 2012 edition of its annual “SPAIN arts & culture” series of programming.

The events, which run through June, feature partnerships with various institutions to bring art, dance, music, literature and film productions to U.S. audiences.

The embassy’s Cultural Office, its network of U.S. general consulates and Cervantes Institutes, as well as the Spain-USA Foundation put together SPAIN arts & culture to link the two countries and promote modern Spanish artistic expression. The Spain-USA Foundation, for example, a nonprofit established in 1999, has brought dozens of Spanish artists, architects, designers, music bands and exhibitions to the United States. Its honorary steering committee includes personalities such as actor Antonio Banderas, chef José Andrés and award-winning architect Santiago Calatrava.

And despite the grim economic headlines coming out of Spain, the country’s arts footprint, both past and present, remains robust. The SPAIN arts & culture spring/summer programming reflects this vibrancy, encompassing works by famous Spanish artists such as Pablo Picasso and Joan Miró in addition to contemporary ones such as photographer Alberto García-Alix — exhibited for the first time in the States — and guitarist Paco de Lucía.

“We try to connect ideas and initiatives that come from Spain that we think are interesting with American partner institutions,” said Guillermo Corral, cultural counselor at the Spanish Embassy Cultural Office. “We put great importance in partnering with local American institutions so that the cultural events we produce and the people we bring and the movies we show do find the right audience. We want to make sure there’s an interest.”

Although the program was born in 2008 as “Preview Spain” in Corral’s office in Washington, it expanded last year to include events in U.S. cities nationwide. This year, SPAIN arts & culture reaches 12 states and 18 cities, including New York and California.

Some of the ideas for the shows originate in the Cultural Office while others are pitched by the institutions, particularly through the 500-member SPAIN RED, the Spanish Cultural Network (spainred.org). It connects artists and anyone in the United States with a vested interest in Spanish culture. 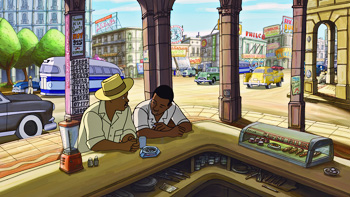 Among the events presented as part of the spring-summer edition of “SPAIN arts & culture” was the animated film “Chico & Rita.”

“We’re constantly talking to them, bringing new ideas or sometimes they come up with things they would like to do and we help. It’s an ongoing thing,” Corral said.

One of the events that Corral is particularly fond of because it originated in his office is WEMADETHIS.ES, a digital book of creative work by artists who work online. It will be released in June at a kickoff event at the Hirshhorn Museum on June 7 with an American digital artist presenting two Spanish illustrators.

“It’s specifically interesting that although they work in Spain, they’re from Spain, their work is everywhere,” Corral said. “They’re hired by France, in the U.S. by Nike or by big telephone companies. They’re doing videos, illustrations, art, and they’re having this fine line in between art and marketing and [are] very global.”

The cutting-edge project unites the Spanish artists with their U.S. counterparts. “The questions the people are asking in this designer community are the same: Where does art finish and it becomes commercial? How has the economic environment changed things or hasn’t changed them? It’s just one of the consequences of having a world that is so interconnected.”

“Flamenco Soul,” in partnership with Berklee College of Music in Boston, is another can’t-miss, Corral said. The show is based on a record produced and recorded last fall by young people in the flamenco and Latin American jazz scenes. It’s the vision of producer Javier Limón, who wanted to examine the evolving continuum of the dance form, according to Marc Powers, director of marketing at the Howard Theatre, where the show will be held June 23 ($25 in advance, $30 at the door). The program, which consists of a dancer, flautist, violinist, pianist, percussionist and vocalist, will pay tribute to the original styles of this iconic Spanish dance tradition while also looking at its more experimental, modern reincarnations.

Powers contacted the Spanish Embassy to find out how they could work together. “About a week later the embassy’s cultural manager, Francisco ‘Curro’ Tardio, mentioned that Javier Limón’s production of ‘Flamenco Soul’ was routing an East Coast run,” Powers explained. “Attracted by this dynamic production pairing of Limón with SPAIN arts & culture, we quickly confirmed ‘Flamenco Soul’ in D.C.” 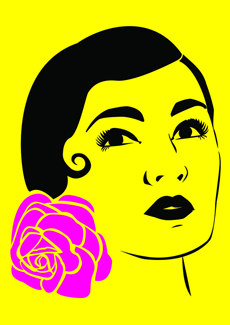 Other highlights of this year’s spring and summer lineup — there will be a fall/winter one, too — include “Ñew York,” an exhibition featuring works by young Latin American and Spanish artists residing in New York City that is on display through May 20 at the Art Museum of the Americas.

For something more historical, “Picasso’s Drawings, 1890-1921: Reinventing Tradition” runs through May 6 at the National Gallery of Art. With 55 pieces, it shows the progress of Picasso’s drawings over 30 years, including his use of cubism and collage (also see “Drawn to Destiny: Picasso’s Sketches Forged His Pioneering Movements” in the April 2012 issue of The Washington Diplomat).

Picking up where Picasso leaves off is “Joan Miró: The Ladder of Escape,” from May 6 to Aug. 12, also at the National Gallery. This exhibit features 120 of the Catalonian’s paintings, drawings, sculptures and prints within a framework of three principal periods: the defining of Catalan identity in the 1920s; the response to the Spanish Civil War and the fall of France between 1936 and 1941; and the demise of dictator Francisco Franco’s regime, 1968 to 1975.

For more Miró, visit the Kreeger Museum through July 31, when its complete collection of his works will be on display for the first time.

Corral attributes the program’s success to the saturation of Spanish heritage in the United States.

“Spain cannot do cultural promotion in the U.S. just like any other country because of the fact that such a large part of the American population — now 50 million people — are somehow related to Spanish cultural heritage,” Corral said. “Although they don’t come from Spain, they do come from different countries mostly in South America or they are born here.

“We think that one of the bigger cultural trends in the 21st century in America is this increasing presence of the Latino presence in the community, in the cultural mainstream of the U.S.,” he added.

Stephanie Kanowitz is a contributing writer for The Washington Diplomat