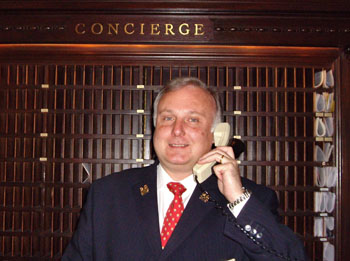 From heads of state to globetrotting tourists, visitors to Washington have come to expect an experience worthy of the nation’s capital.

Getting guests what they need, whether it’s dinner reservations or insider travel tips, often falls to chef concierges such as Robert Watson of the Willard InterContinental Washington.

A peak behind the scenes at some of D.C.’s premier hotels reveals a quiet cadre of dedicated service professionals working hard to ensure that the city’s guests are well looked after.

In a structure built in 1818, and always functioning as a hotel of some sort, the Willard InterContinental Washington has a long history of hospitality, which even includes hosting the first diplomatic mission of samurai from Japan in 1860.

“That legacy impacts our service to this day,” said Barbara Bahny, director of public relations for the hotel. “In many parts of life service has gone away and been replaced by self-service.”

But at the Willard InterContinental, Bahny said, “it takes an army, a village,” to provide exceptional service to the guests staying in the hotel’s 335 guestrooms and 41 suites.

At the frontline of that army is bell captain Steve Blum. For more than 25 years, Blum has welcomed to the hotel seven U.S. presidents, countless heads of state, numerous members of royal families and dozens of Hollywood celebrities.

“I like to be professional,” said Blum, of his particular greeting. “I always want to be charming and friendly, but not chummy.” When diplomatic missions arrive, he makes it a point to learn a few catch phrases in their native language.

“It’s still a little thrilling,” he said, to watch a flag-bearing motorcade pull up to the hotel, even after all of his years on the job.

Staff at the Willard InterContinental receive training from the State Department on certain cultural sensitivities for different countries, said Blum, but it often just comes down to “common sense and treating people respectfully, whether it’s a foreign head of state or a lady from Philadelphia.”

In particular, Blum said he especially enjoys greeting families with young children and likes to show them a reversible hand puppet that changes from an elephant to a donkey depending upon partisan preference. For canine guests staying at the hotel, he keeps treats under the desk.

Perhaps not surprising, Blum has sometimes been called upon to go above and beyond the expected responsibilities of a hotel bell captain.

When the wife of the head of state of a European country wanted to buy a particular electric toothbrush, he personally went to a nearby CVS pharmacy to make the purchase for her, using his own credit card when the total exceeded the cash that she had given him.

While Blum admits that he has jumped through “more hula hoops” for some guests, he added that “every guest is a VIP in my mind.”

In a 37-year career, Robert Watson worked his way up at hotels in London, South Africa and Luxembourg before serving for the past six years as the chef concierge at the Willard InterContinental.

“No two days are the same,” said Watson. “As a concierge, you must like dealing with people. It’s what we are known for.”

Asking the right questions is an important part of understanding the needs and tastes of a guest, he explained. “Their [general] needs are always the same,” only the results and locations are different.

“I treat each guest as an individual,” he said, adding that he usually tries to send them to places in the city “where the locals go.”

Having a great team behind him is also critical for being able to provide what Watson describes as the “European mentality of service” at the Willard. “We all feed from each other.”

But even after so many years on the job, he said he is still learning and constantly looking for ways to improve the services he provides. Tools like Google Earth and iPads have allowed Watson and his staff to better assist guests. 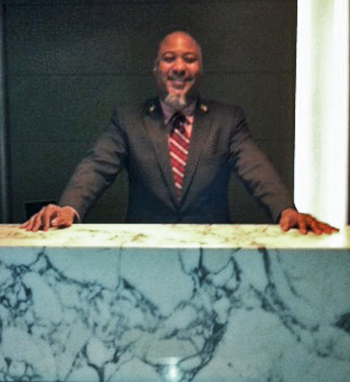 Michael High assists guests with whatever they need at the Dupont Circle Hotel.

He uses Google Earth to show guests how to enter complicated sites like the U.S. Capitol Building and the National Mall. If the line gets very long at the room check-in, he will walk over to a guest with the iPad and offer to make a dinner reservation for them. “It helps the time pass while they are waiting in line. It improves service and the guests appreciate it,” said Watson.

As chef concierge of the Dupont Circle Hotel for the past three years, Michael High would agree.

“I speak to everybody,” said High. “I like to have fun with my guests. And as long as it’s above board and ethical, I’ll get them whatever they need.”

Like champagne, flowers or hard-to-get dinner reservations — “I create magic moments,” he said.

But at a busy hotel, good time management is critical before any magic can happen, High told The Diplomat. “You have to manage your time well. I can have six people waiting to speak to me and I don’t want to upset any of them.”

If his desk gets congested, he said he first makes it a point to acknowledge every guest standing in line while politely moving each person along.

Appreciative guests at the Park Hyatt Washington in West End have praised the efforts of chef concierge Shane King with positive reviews on travel websites like Tripadvisor.com and Orbitz.com.

“Guests will say, ‘I read about you,'” said King, who replies to them by asking: “Now what can I do to make you feel the same way!”

From simple to more complicated requests, King has helped to plan special after-dinner dessert receptions at the Lincoln Memorial and assisted in choreographing surprise marriage proposals.

“Our guests expect an attention to detail,” he told The Diplomat. “It’s not that I have to go above and beyond, but I pride myself on making the experience as memorable as possible.”

For King, the key to providing great hotel service is to be “organized, patient, polite, well mannered, have the ability to read people and be diplomatic.”

With a list of exacting qualities like that, it is no surprise that at the Four Seasons in Georgetown, quality service frequently begins with the hiring process.

“You can teach someone how to do a job. But not qualities like personality, being service-oriented, caring, looking people in the eye, the way they speak — this is who we hire,” said Liliana Baldassari, director of public relations for the hotel.

A frequent destination for diplomatic visits, the 459 collective employees speak a combined total of 32 different languages and are expected to adhere to “the golden rule” of treating others as you would like to be treated, said Baldassari. That philosophy applies to guests, fellow employees and even pets at the city’s only five-star, five-diamond hotel, she said. 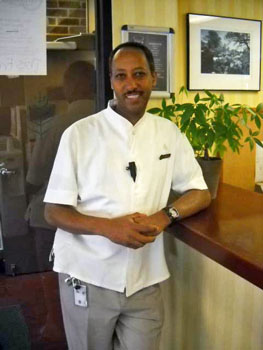 As the doorman at the Four Seasons Hotel for more than 30 years, Eskinder Isayas says he strives to exceed the expectations guests might have of a five-star property.

The ability to think on one’s feet is another important skill that hotel employees must possess as well.

The Four Seasons security staff is trained to handle a wide array of situations from lost items to guest illness to bomb threats, said Them Nyanungo, who has been working in the security department at the hotel for the past 10 years. Strong working relationships between the hotel and local police and fire departments have been established.

But when a security situation inevitably arises, Nyanungo said, “I first take a second to think, to try and be rational and not emotional, to use my best judgment and not panic. Once on the scene, I take charge.”

“We find a way to solve problems,” said Nyanungo. “Nothing is too difficult that we can’t find a solution for our guests.”

As the doorman at the Four Seasons Hotel for more than 30 years, Eskinder Isayas said his guiding principles are to always greet guests in a friendly manner, to provide the utmost service, and to even exceed the expectations that one might have of a five-star property.

“I like to meet people and greet people. That’s where the first impression is made,” said Isayas. “It’s what I most enjoy about my job.”

“From time to time, every job is challenging,” he said. On busy days when the hotel’s driveway becomes filled with cars of multiple arriving guests, he makes sure that “no one is left alone and everyone is tended to properly.”

Isayas concedes that it’s not always an easy task to keep one’s composure especially when guests are irritable or difficult. But the most important thing to providing impeccable service, he said, is to “be sincere and keep smiling.”

It keeps guests returning to the hotels and to the city. Heads of state and tourists may come and go, but with exceptional staff, great service in Washington, D.C., is here to stay.