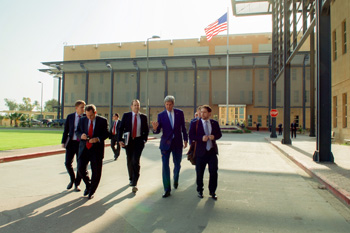 As Democrats and Republicans bicker over what really happened in Benghazi nearly four years ago, the State Department has quietly revamped its guidelines for protecting U.S. diplomats as well as employees of NGOs in overseas danger zones.

Heather Higginbottom, deputy secretary of state for management and resources, discussed those guidelines with other panelists during a June 22 conference at the U.S. Institute of Peace titled “Frontline Diplomats and Development Workers.”

U.S. Secretary of State John Kerry walks with his staff across the U.S. Embassy in Baghdad on April 8, 2016. The sprawling compound is one of America’s most heavily fortified missions abroad.

The USIP event preceded by six days the release of a congressional report on the 2012 attacks in Benghazi, Libya, that killed U.S. Ambassador Christopher Stevens and three other Americans. After two years, $7 million and 800 pages, the report, led by House Republicans, found no new evidence of wrongdoing by then-Secretary of State Hillary Clinton, although it heavily criticized the Pentagon, CIA and State Department for failing to protect America’s diplomats abroad. In response to the report, Clinton said “it is time to move on” and noted that she implemented an array of changes at State in the wake of the tragedy. Republicans, however — some of whom issued a separate, more stinging assessment of Clinton’s actions — are unlikely to let the issue go in a heated election year.

As the campaign rhetoric and conspiracy theories over Benghazi continue to divide the nation, officials have been working behind the scenes to keep diplomats and aid workers safe but not sheltered. Stevens himself, a fluent Arabic speaker, reportedly prided himself on interacting with the people of Benghazi as much as possible.

The USIP discussion focused on efforts to balance access to facts on the ground with the need to mitigate risk in conflict zones. “Leaders must accept that some danger will always be present if we want to be part of the world,” said Higginbottom, noting that while these dangers may be evolving, they are not necessarily new.

In fact, the event coincided with this year’s 100th anniversary of the State Department’s Diplomatic Security Service, founded in 1916. That was long before an age when embassies were stormed and diplomats taken hostage, as happened in Iran in 1979, or when terrorists blew up U.S. missions abroad, as was the case in 1998 in Kenya and Tanzania.

To be sure, diplomats aren’t the only ones targeted by bad guys. Employees of NGOs ranging from Oxfam America to Save the Children also face risks overseas, as do Peace Corps volunteers and thousands of people on the payroll of USAID.

“Twenty months ago, a large group of us gathered here at USIP to discuss what constitutes acceptable risk for development workers,” said Doug Wilson, former assistant secretary of defense for public affairs, in introducing Higginbottom. “The simple premise of that discussion was this: For those who serve their country in uniform, on the battlefield, the acceptance of risk is a given. But U.S. diplomats and development workers also face increasing challenges trying to forge relationships with the public. Too often, the ways they have been told to deal with these challenges is insufficient, like relying on social media and fortress-like structures. We’re so risk-averse that we’re creating fundamental barriers to trust.” 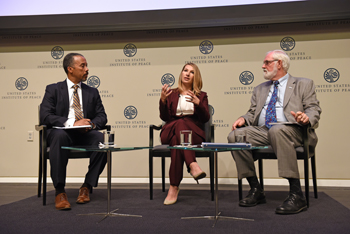 Among the questions experts grapple with: What constitutes acceptable levels of risk for frontline civilians? And what tools and resources are needed to minimize risk without undermining the basic goals of engagement?

Higginbottom, who has been in her current role since December 2013, said the dilemma cuts to the heart of U.S. foreign policy.

“An aid worker who gets clean water for a village may stop the next Ebola virus. Our efforts to counter violent extremism may steer a potential terrorist down a better path,” she said. “Stabilizing Afghanistan and Iraq — and even places like the southern Philippines and northern Nigeria — is necessary so that they don’t serve as bases for terrorism. But we can’t score if we’re not on the field.”

To that end, Higginbottom’s office has come up with six specific priorities following the State Department’s 2015 Quadrennial Diplomacy and Development Review (QDDR) that she says “have helped the department adapt to this evolving threat to make sure we’re appropriately balancing our mission.”

These include tailoring aid programs to shifting security situations; teaching diplomats how to physically move around in conflict zones; and offering hands-on training for high-threat posts. In the past year alone, the State Department has slashed U.S. personnel in Cairo by 20 percent by eliminating “tasks that were administrative in nature,” and resumed a U.S. presence in war-torn Somalia with a phased approach to reduce risk.

“We haven’t had an embassy in Mogadishu since 1991, but we never severed our relations. Our embassy in Nairobi enabled us to maintain a relationship. We’ve had day trips to Mogadishu, trips to other cities and routine movements from Nairobi,” said Higginbottom. “Our risk analysis made clear that a strong presence is in our national interest. But we need to be proactive in reducing our footprint wherever possible.”

The State Department has also opened a foreign affairs training center in Virginia and “convenes senior officials from across the department to determine which of our posts are most at risk and move those to the front of the line for security needs.”

Even so, Higginbottom conceded, “We need to continue to do a better job caring for people who take the risks, to ensure we’re addressing their needs. Second, we have to foster a more nuanced understanding in Washington about the risks inherent in the conduct of diplomacy. Some uncertainty and danger will always be a part of the world. Our people thrive when they’re having a positive impact on the ground. But if we don’t stay engaged, we will lose our most effective and talented Foreign Service officers.” 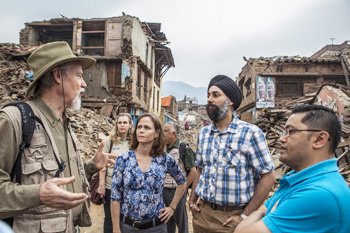 USAID Acting Assistant Administrator Thomas Staal has worked at the agency since 1988, working in hotspots ranging from Sudan to the West Bank and Gaza.

Ten years ago, he said, 80 percent of humanitarian assistance worldwide went to natural disasters. Today, 80 percent is spent on conflict disasters. “Around the world, humanitarians grapple with the willful denial of access. Humanitarian aid is obstructed by incomprehensible rules as well as bad actors, while arms flow freely across borders.”

Complicating matters, he pointed out that in 2014, there were 190 attacks against aid workers — triple the 63 attacks reported in 2004. Meanwhile, the number of aid workers killed surged to 121 in 2014 from 56 in 2003, a time span that also saw a dramatic rise in harassment by roadside militias and unwarranted search and seizures.

“Governments around the world are imposing legal and fiscal restrictions on aid workers, which hampers their ability to operate freely,” Staal said. “When I was in Sudan registering World Vision, I met with Sudan’s head of security. He told me, ‘Everyone comes to Sudan for one of three reasons: spying, subversion or proselytizing. My job is to find out which one of those is you, and expel you.’”

Even so, said Staal, “We cannot allow ourselves to become bunkerized. We must venture out and get to know the local dynamics in order to be effective. This is why USAID has redefined and refined how it does business.”

As such, USAID has boosted the number and intensity of the security training required of staffers in high-threat environments. In 2013, for example, following the flare-up in violence in South Sudan, USAID began training its local staff in trauma awareness and resilience. Staffers in 30 countries must now undergo similar courses.

“Careful negotiations at the local level in South Sudan ensure that partners have the buy-in of locals,” Staal said. “In some places, we’re working more closely with the U.S. military. In the Central African Republic, partners negotiated with MINUSCA [the U.N. mission there] to increase patrolling on roads where the World Food Program was becoming victims of roadblocks and attacks. We calibrate programming so it remains responsive to shifting needs.”

Staal noted not only the professional strains of working in a difficult environment, “but also having to go to places where you can’t bring your families. In 30 years of my working career, the only post where I didn’t bring my family was Iraq.” 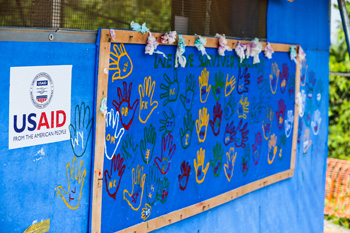 Survivors of Ebola leave their handprints on a wall of the Bong County Ebola Treatment Unit, the facility that saved their lives. For every handprint, there were hundreds of aid workers funded by USAID sent to curb the spread of the virus in West Africa. Heather Higginbottom, deputy secretary of state for management and resources, defended the deployment of aid workers to hotspots around the world, saying at a recent U.S. Institute of Peace discussion that, “An aid worker who gets clean water for a village may stop the next Ebola virus. Our efforts to counter violent extremism may steer a potential terrorist down a better path.”

“When I was in Iraq, we visited a school that had been renovated by USAID. It cost us $20,000 to renovate the school, but $35,000 to visit that school when you added up the cost of vehicles and security,” he said. “Even in places where we don’t think we’re a party to a conflict, we are seen as part of the problem. In the past, aid workers were seen as somehow neutral. That’s clearly no longer the case in many countries.”

Rebecca Zimmerman, associate policy analyst at the Rand Corp., has worked in several African and Asian countries, but her principal experience has been in Afghanistan. She said that with a jump in travel restrictions for U.S. diplomatic staffers, there’s been a “dramatically increased reliance on development workers.” As a result, NGOs are “constantly evaluating” what the risk threshold is.

“I’ve been to Afghanistan under every security consideration you can possibly imagine — from not being allowed to leave the base at all, to living in a house in town. I can tell you that the difference in what I’m able to learn is stark. When you are able to get out and do a job that you’re supposed to do, you can bring back not just immediate knowledge, but an understanding of second- and third-order effects, which we cannot really begin to understand when you are behind high walls.”

“I signed up for this job, I know what I’m getting into and I don’t regret that. But it’s gotten much harder to recruit,” she said. “People don’t want to be locked behind walls. They want to have impact. Imagine after Hurricane Katrina if the people who were told to rebuild New Orleans had to do it from Atlanta, leading a team from afar. It’s not the same. That’s not to say we want to take arbitrary risks, but there’s a lot of risk we take by not getting out there.”

For example, she said, back in 2007 while overseeing USAID’s $45 million stabilization program in Pakistan’s Federally Administered Tribal Areas from her base in the northwestern Pakistani city of Peshawar, the assumption was that everyone in the semi-autonomous tribal belt bordering Afghanistan supported the Taliban, meaning nothing could be accomplished there.

“But by being able to go out there, we quickly ascertained that we could work in those areas,” said George. “The majority of the population was actually on our side.”