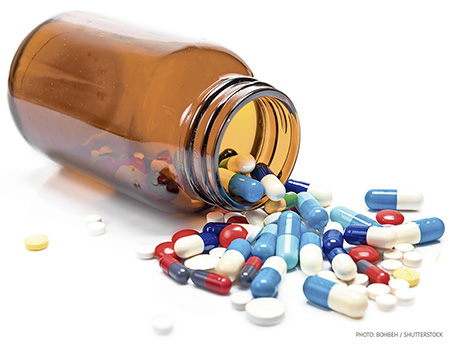 Also See: Dermatologists Cut Back on Antibiotics, But Still Prescribe the Most

Nearly 25 percent of antibiotics prescribed in the United States are given for conditions they aren’t meant to treat, a new study finds.

Antibiotics are miracle drugs that can cure deadly bacterial infections. But too often they are given to treat viral infections, such as colds and flu, for which they are ineffective.

And the overuse of antibiotics brings public health dangers, experts have been warning.

“Antibiotic prescribing is a major driver of the development of bacteria that are resistant to antibiotics,” said lead researcher Dr. Kao-Ping Chua, an assistant professor of pediatrics at the University of Michigan in Ann Arbor.

Antibiotic-resistant bacteria are one of the greatest threats to health worldwide, he said. Every year, 2 million Americans develop antibiotic-resistant infections and 23,000 die, according to the U.S. Centers for Disease Control and Prevention.

“Given this, it is urgent for providers to eliminate inappropriate antibiotic prescribing, both for the sake of their own patients and for society more broadly,” Chua said.

For the study, Chua and his colleagues studied insurance records of more than 19 million children and adults under the age of 65. All patients were privately insured.

About 36 percent of the prescriptions might have been appropriate but unnecessary, because they were for conditions like sinusitis and sore throats, which can be viral.

Most of the inappropriate prescriptions came from doctors’ offices, urgent care centers and emergency rooms. Almost 29 percent of prescriptions had no diagnosis code and might be inappropriate because some were given based on phone or online consultations, the study found.

Researchers found that one in seven patients filled at least one unnecessary antibiotic prescription in 2016. That translates to one in 10 kids and about one in six adults.

“The most recent national studies on antibiotic overuse in the U.S. used older data from the first half of this decade,” Chua said. “Our study shows that despite widespread quality improvement efforts, inappropriate antibiotic prescribing was still rampant in 2016.”

“We overprescribe antibiotics in a big way for sure,” he said.

The reasons are many and varied. For one, Siegel said, nearly all upper respiratory infections are viral, but many doctors fear missing the rare bacterial infection and prescribe an antibiotic just in case. And patients often demand them.

Doctors need to ask more questions about the patient’s condition before writing a prescription, he said.

“It’s a clinical decision whether to prescribe antibiotics,” Siegel said. “We tend to rely on wanting to make the patient feel better.”

While doctors often think there’s no harm in giving a pack of antibiotics, doing so can cause problems for some patients.

For example, patients with heart conditions may develop an irregular heart rhythm from some antibiotics, Siegel said. Antibiotics may also kill off children’s gut bacteria, putting them at risk for allergies, he added.

“Patients shouldn’t push their doctors for antibiotics,” Siegel said. “Physicians, don’t feel pressured to give a pill that may not be necessary.”

The Mayo Clinic offers more about antibiotics at www.mayoclinic.org/healthy-lifestyle/consumer-health/in-depth/antibiotics/art-20045720/.

Dermatologists Cut Back on Antibiotics, But Still Prescribe the Most

U.S. dermatologists are prescribing fewer antibiotics overall but are writing more short-term orders for the drugs, a new study finds.

Dermatologists prescribe more antibiotics per doctor than any other medical specialty — more than 7.1 million prescriptions per year, the University of Pennsylvania researchers said.

The drop was significant among patients taking extended courses of antibiotics — down 53 percent over the study period. That includes a 28 percent reduction in antibiotic prescriptions for acne, the study authors said.

But the investigators found a nearly 70 percent surge in short-term use of antibiotics, especially for skin-surgery patients. Those prescriptions rose from 3.92 to 6.65 per 100 visits.

In addition, antibiotic prescriptions associated with cysts increased 35 percent, according to the study published Jan. 16 in JAMA Dermatology.

Many dermatological patients, including those taking antibiotics for inflammatory skin conditions such as acne and rosacea, may stay on antibiotics for long periods. That’s an issue, because overuse of antibiotics can lead to reduced effectiveness, the researchers explained.

“Overall, our findings are hopefully a sign that we’re making progress, but we need to evaluate how we can optimize the use of antibiotics in dermatologic surgery,” lead study author Dr. John Barbieri, a dermatology research fellow at the University of Pennsylvania, said in a news release.

That includes more studies to determine which skin surgery patients benefit most from antibiotics, he said.

While prescription rates were down overall, the types of antibiotics used and length of treatment remained the same, the findings showed.

“This may be a sign that treatment guidelines have raised awareness about overuse, though it’s also noteworthy that there are biologic and other alternate treatments that give patients more options than they’ve ever had before,” Barbieri added.

The American Academy of Family Physicians has more on antibiotics at https://familydoctor.org/antibiotic-resistance/?adfree=true.