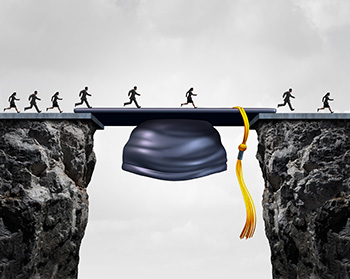 Immigration was a hotly contested issue in the U.S. presidential race, with Republican Donald Trump buoyed by anger over what many Americans perceive to be a glut of foreigners inundating the United States. Yet only 34 percent of U.S. college students realize that more Mexicans have left the United States than entered it over the last five years.

Likewise, as North Korea rattles the region with a series of nuclear and ballistic missile tests, only 36 percent of students know how many U.S. troops are stationed in South Korea and a mere 28 percent are aware that the U.S. is treaty-bound to protect Japan if it is attacked (despite Trump’s campaign pronouncements that he may not come to allies’ defense).

On the all-important subject of war, only 30 percent of American college students can correctly name which branch of government (legislative) has the constitutional authority to declare war.

Those were among the dismal findings of a survey commissioned by the Council on Foreign Relations (CFR) and the National Geographic Society, which found serious deficiencies in college-age students’ understanding of the increasingly interconnected world they must navigate. 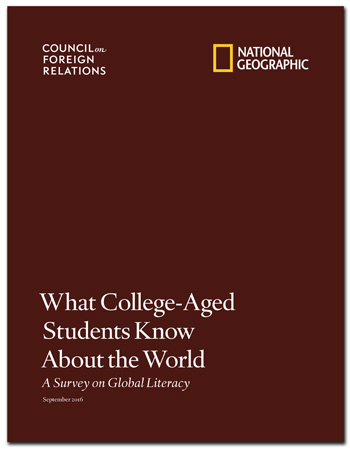 The Council on Foreign Relations and Na- tional Geographic Society commissioned a survey last May to gauge American college students’ knowledge about the world.

The Global Literacy Survey, conducted in May by ARC Research, polled 1,203 students educated at U.S. colleges and universities between the ages 18 to 26 to gauge their mastery of geography, the environment, demographics, U.S. foreign policy, recent international events and economics. The survey revealed that few students possess critical knowledge about the world and America’s role in it, including which countries are U.S. allies and basic geography.

For instance, only 31 percent of students could pinpoint Israel on a map, while only 29 percent correctly identified Indonesia as a Muslim-majority nation. About half knew that Mandarin Chinese is the language spoken by the most people in the world, and only 57 percent were able to identify Sudan as being located in Africa.

There were a few bright spots, however, particularly on the environmental front. A majority (78 percent) of students knew that fossil fuels are a nonrenewable resource and 84 percent said the increase in greenhouse gases in Earth’s atmosphere is considered by scientists to be one of the causes of climate change.

A majority of respondents also indicated that it is vital to be knowledgeable about geography, history, foreign cultures and world events, and nearly three quarters said these topics are becoming more important to them.

Overall, however, this desire to learn more about the world didn’t translate into encouraging results. On the knowledge questions, the average score was only 55 percent correct. A mere 29 percent of respondents earned a minimal pass, and just over 1 percent — 17 students of 1,203 — earned an A (91 percent or higher).

Caroline Netchvolodoff, vice president of education at CFR, admitted that the results were disheartening, although she said they offered some grounds for optimism.

“Knowing which countries are U.S. treaty allies, where the United States has deployed significant numbers of troops, which part of the U.S. government has the power to declare war — this is core knowledge that every citizen should possess in order to understand the United States role in the world,” she told The Washington Diplomat via email. “On the upside, however, strong majorities of respondents indicated that they believed it important to be knowledgeable about current world events, international relations, U.S. government and related topics. Almost three-quarters said those topics are becoming more important to them. This reflects the recognition that today’s world is interconnected and global knowledge is critical.” 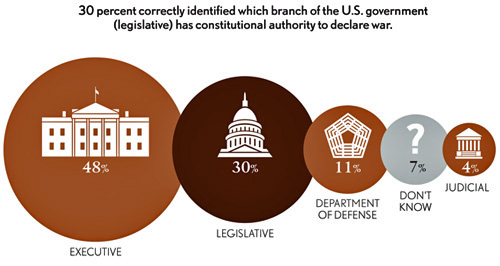 CFR President Richard Haass said the repercussions of not having this knowledge are far-reaching and detrimental. “College graduates step into a world characterized by enormous cross-border flows of people, services, currency, energy, entertainment, technology, disease, drugs, weapons, ideas and much more. American citizens are affected in fundamental ways by what happens in the world. These findings suggest that many students simply are not prepared to understand the world they will enter. This will have adverse consequences for their individual prosperity and for the country’s economic competitiveness, national security and democracy,” he said in a press release.

Netchvolodoff agrees that ignorance about how the world works has profound, widespread effects on the United States, even in a time of retrenchment that the president-elect seems to be ushering in. “First, every American is a citizen of a democracy facing enormous challenges in the world. The country benefits when citizens have the knowledge required to evaluate competing policy ideas and demand accountability from their elected officials,” she told us. “This can happen only when all Americans, not just those working directly in international fields, care about and have a basic understanding of the foreign policy choices facing the United States. That said, we also need qualified Americans to work in those international fields, whether in the diplomatic corps, the military, the intelligence community, the civil service or the private or nonprofit sector. Filling positions in these arenas is critical to advancing U.S. interests in the world, and this again requires a basic level of global literacy across society.” 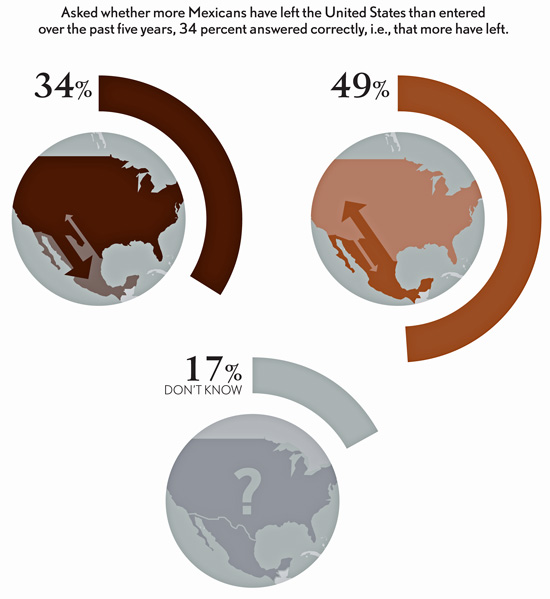 To help address this problem, Netchvolodoff said that CFR created a “Model Diplomacy” simulation program for higher education and high school classrooms last year; the think tank is also launching a new initiative called CFR Campus that includes original educational content. “We believe all of this, in addition to the many other resources available at CFR.org, will serve students, instructors and lifelong learners. Similarly, National Geographic has long been committed to making geographic education accessible to students and the broader public.”

Netchvolodoff added that while U.S. colleges and universities offer a range of avenues for students to learn about international affairs, from political science and economics courses to cultural clubs, CFR argues that “schools should not simply offer courses and opportunities, rather they should require them.”

“Many schools have distribution requirements that oblige students to take internationally focused courses, but often these requirements are so loose that they don’t effectively give all graduates a basic level of understanding about geography, international relations and foreign policy,” she said.

She noted that the Organization for Economic Cooperation and Development’s Programme for International Student Assessment (PISA) has proposed including an “assessment of global competence” in its 2018 PISA survey — “a heartening step that could add to our understanding of which societies are best preparing their young people for today’s world.”

The CFR-National Geographic survey also confirmed what has become patently obvious in recent years: Young people are increasingly turning away from traditional sources of information such as classrooms and newspapers in favor of social media, internet blogs and TV comedy shows such as “The Daily Show.” 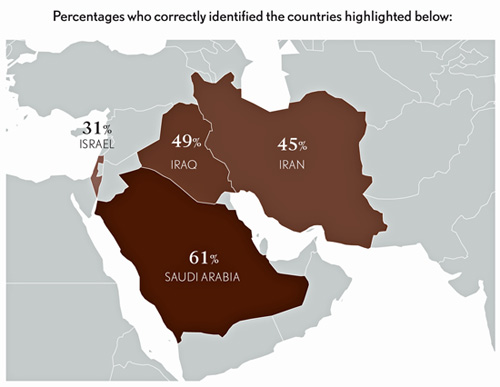 “On the one hand, it’s terrific to see young people seeking news from a wider variety of sources than ever,” Netchvolodoff said. “Comedy news programs, social media networks and other sources often deliver information in formats that young people — and the rest of us — find digestible and compelling. To the extent that this exposes Americans to information they might not otherwise get, it’s a plus. The downside is that the demand for brevity and buzz can squeeze out nuance. Foreign policy issues are complex and generally offer no obvious policy solutions.”

Facebook and other social media platforms also allow users to pick and choose their news, amplifying their opinion without exposing them to opposing viewpoints. “It can be distorted by what has been termed the ‘echo chamber effect,’ in which like-minded individuals are connected and communicate with one another, but not so much with those who might consult a greater variety of resources and hold different points of view. This increases the need for all of us, including young people, to think critically about what we’re reading or being told,” Netchvolodoff said.

That need has grown exponentially in the wake of the 9/11 terrorist attacks and the global turbulence of the last 15 years, including a worldwide economic recession, a wave of populist, xenophobic political sentiment, two American-led wars, the explosive rise of the Islamic State, turmoil throughout the Arab world, territorial disputes in Asia and tensions with geostrategic competitors such as China and Russia. 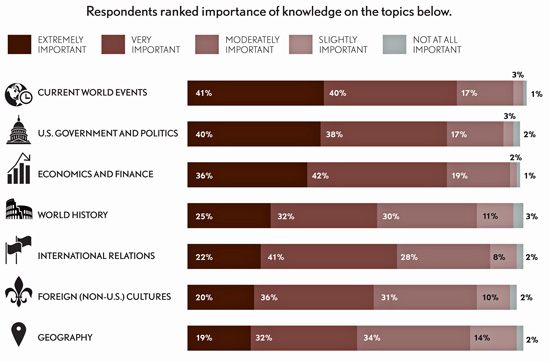 “The September 11 attacks established beyond any doubt that what happens in the world, even in seemingly far-off places, can affect Americans directly here at home. Americans who were young children when the attacks occurred, or who have been born since, have grown up in an environment marked by this reality. The U.S. military has been involved in Afghanistan, Iraq or both for some 15 years,” Netchvolodoff pointed out.

“It’s hard to establish cause and effect, but today’s young people clearly care about international affairs and want to be involved. In addition to our survey results, we see this, for example, in the fact that the number of American students studying abroad is more than three times higher than it was 20 years ago, though it’s still relatively low overall.”

Netchvolodoff also cited a 2013 study that found that 75 percent of American millennials (ages 16 to 34) wanted “to travel abroad as much as possible,” as well as a recent Pew poll showing that 70 percent of voters ages 18 to 29 consider foreign policy to be “very important to their vote.”

“So I think young people recognize that today’s world is interconnected and want to understand and participate in it. What is crucial is helping them obtain the knowledge, skills and perspective to do so effectively.”