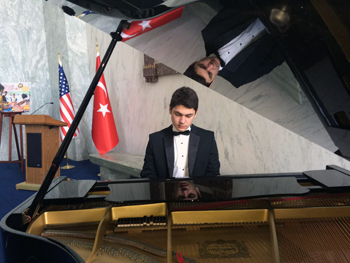 in Turkey, performed during a recent Capitol Hill concert.

Nearly 1.8 million Syrian refugees have adopted Turkey as their home in the four years since civil war broke out in their homeland. Like any adoption, this massive influx stirs conflicting emotions. On the one hand, Turkey has welcomed Syria’s refugees more openly than perhaps any other neighboring nation, absorbing half of those who have fled the war-torn country. On the other hand, the flood of shell-shocked and often-destitute refugees has strained resources and bred resentment among their hosts.

Like the many Syrians who have crowded into tent camps or blended anonymously into Turkey’s urban centers, their stories of violence, displacement and personal tragedy often fall on deaf ears, obscured by the cacophony of conflict and indifference.

But there are a few hopeful exceptions trying to break through this quiet apathy, including 16-year-old pianist Tambi Asaad Cimuk. Personally granted Turkish citizenship by President Recep Tayyip Erdoğan and dubbed a prodigy by Turkish media, Cimuk’s talent has taken him from war-ravaged Damascus to Carnegie Hall. On May 14, the young musician — whose teachers predict will be the next Sergei Rachmaninoff — performed a concert at the Rayburn House Office Building on Capitol Hill in a concert hosted by the Turkish Embassy in partnership with the International Rescue Committee.

“Unfortunately, Tambi and his family weren’t able to move freely around the world without Turkish citizenship, so they asked for our government’s help,” said Turkish Ambassador Serdar Kilic. “We hope that this concert in the halls of Congress will raise greater awareness on the need to come together to bring peace for the millions of individuals who continue to suffer because of the Syrian conflict.”

That conflict has killed at least 210,000 people. “We should do what we can to prevent the slaughter of these innocent Syrian civilians,” House Foreign Affairs Committee Chair Ed Royce (R-Calif.) said at the D.C. concert, which was attended by more than 200 people. “We need to have a solution here where the people of Syria can return to their homes in peace and have a new government that coalesces around a basic respect for human dignity.” 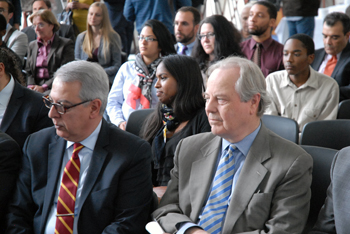 In attendance for the concert were Turkish Ambassador Serdar Kilic and Rep. Ed Whitfield (R-Ky.), co-chair of the Turkey Congressional Caucus.

Cimuk had never been formally trained in music, only playing the accordion as a hobby. The summer after he finished middle school, in 2013, he and his family fled Syria for Turkey, where a chance visit to a music store sparked an acclaimed musical career. After asking the store manager about music lessons, he met his future teacher who would discover and nourish his talent for the piano.

A pleasant and optimistic teenager, Cimuk is humble about his success. “People think I’m talented, but it’s not all about talent. It’s 2 percent talent, and the rest is about working hard.”

While he considers Syria his motherland, he expresses gratitude for the country that allowed him to travel the world and make a career for himself. His story is uncommon, especially in a country where the influx of Syrian refugees has created a burden on Turkish social services and increased tension in communities, including border towns. Turkey has spent around $6 billion on humanitarian assistance and relief for Syrian refugees inside the country.

For years, the Turkish government has been complaining of the lopsided international response to the worsening refugee crisis in Syria, where over half the population is in need of aid and the bulk of refugees has converged on five neighboring states — Turkey, Lebanon, Jordan, Iraq and Egypt — each ill-equipped to handle the surge. In comparison to the millions of Syrian refugees living in these states, only 120,000 have been accepted into the 28 European Union member countries, which together are five times larger than Turkey. 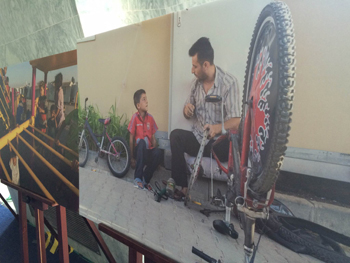 The event included a photo exhibition on the nearly 1.8 million Syrian refugees who have streamed into Turkey.

Despite the steps that Turkey has taken to welcome these refugees, it has been hesitant to extend Syrians work permits or permanent legal status. Attaining citizenship is even harder, which is why Cimuk’s success is such a rarity. He could not participate in international music competitions with his Syrian papers, so his teachers made it a point to publicize his case until he received a call from President Erdoğan with good news granting him and his family Turkish citizenship.

The D.C. concert, in which Cimuk played pieces from Chopin, Mozart and Rachmaninoff, also included a photo exhibition, “Safe Harbor Turkey: Restoring Hope,” which highlighted the role of Turkey in providing refuge for fleeing Syrians. The event was both a chance to showcase Cimuk’s talents and a PR coup for Turkey.

But for Cimuk, who has only just begun his training and still faces many challenges, the chance to just be heard on the world stage is a start.

“I’m not a journalist or a soldier, but with my piano and music, I can send a peaceful message,” said Cimuk. “I’m only 16 years old, so I can’t do too much, but music is something that is within my hands.”