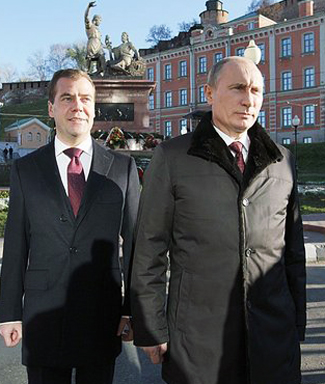 Russia-watchers all have the date of the next presidential election, March 4, 2012, circled on their calendars, though the outcome probably won’t be a nail-biter after Prime Minister Vladimir Putin’s recent announcement that he will stand for re-election and replace his “tandem” cohort, current President Dmitry Medvedev. But the nation’s next electoral landmark actually comes on Dec. 4, when voters select members of the State Duma, the lower house of the national legislature and a barometer for Russian politics.

Opinion polls — and longstanding tradition — suggest that United Russia, the party of Putin and Medvedev, will roll to a decisive victory: Most recent polling gives the party levels of support hovering around 50 percent. Nevertheless, that’s sharply down from the 60 percent mark just the previous week. The poll numbers also suggest that United Russia could lose its two-thirds majority in the lower parliament house — the minimum threshold to approve constitutional changes, a prospect that unnerves a party accustomed to 60 percent-plus victories. (Putin’s own numbers took a recent dip, although he remains the most popular figure in the country, with a 61 percent approval rating.)

Russian President Dmitry Medvedev, left, walks with Prime Minister Vladimir Putin during Russia’s National Unity Day. Next March, the political “tandem” will switch roles, with Putin almost certain to reclaim the presidency and Medvedev then becoming his prime minister, although many observers say Putin has always been the man in charge.

Despite some of the uncertainty, Putin’s political juggernaut is sure to cement its grip on government. United Russia’s most popular rival, the Communist Party, typically fails to exceed even 15 percent of the vote, while a handful of smaller parties check in with paltry ratings.

With United Russia’s first-place finish all but assured, the party’s success will be measured by secondary determinants. In the previous State Duma election in 2007, United Russia came away with just under 65 percent of the total votes; a victory in which its support erodes by one-third — that is, an election in which the party receives just 40 percent of the votes — will seem like anything but. On a related note, United Russia will also be focused on reaching the 300 seats necessary in the 450-seat chamber to amend the constitution. Perceptions of fairness will also help determine whether the election is a success. If United Russia reaches 300 seats only through blatant fraud, the legitimacy of the party could be tarnished. Such a concern is not merely academic, as various electoral monitors denounced the 2007 contests as unfair.

The State Duma election comes less than three months after Putin announced that he will again stand for the presidency, a post he held twice from 2000 through 2008 (and was barred from holding a third consecutive time). Medvedev, whose relationship with Putin is subject to an enormous amount of speculation, will now step aside, paving the way for his old political patron to return (though most say he never really left, pulling the strings of Medvedev’s puppet presidency), while Medvedev would become prime minister under Putin.

The job swap bolsters the view that Putin was always the most important man in Russia, despite earlier hopes that Medvedev might come into his own occupying the weightiest position in the Kremlin. “Putin’s decision sure seems to confirm that impression, and the fact that Medvedev never established a patron-client network in the halls of power suggests that no one at the top thought he was a serious alternative source of power,” said Eric Lohr, a Russia expert who teaches at American University.

While Russia analysts have long assumed that Putin’s return to the presidency was inevitable, the timing of the announcement was a bit sooner than expected. Medvedev was declared United Russia’s presidential candidate only after the 2007 legislative election. According to Harley Balzer, an associate professor whose work at Georgetown University focuses on Russian politics and governance, this was intentional.

The State Duma election had previously been used as a sort of informal primary to gauge interest in various candidates. Balzer says the acceleration of this selection process may reflect concerns that Russia’s opaque political climate was hurting the economy. “The uncertainty was getting to people; capital flight is getting worse,” he said. “They decided they’d better go ahead and clarify what was going to happen.”

The economy will indeed be the foremost challenge for Putin, who transformed the chaotic post-Soviet landscape of the 1990s with oil riches that raised standards of living (and even made Moscow the wealthiest city in the world in recent years). Medvedev tried, at least superficially, to wean Russia off its energy-fueled boom by pushing economic innovations, which included trying to replicate California’s Silicon Valley — reforms Putin has hinted he would pursue as well.

That’s because not only is Russia suffering from the weak European economy next door, but the nation is also burdened by deeper, structural flaws. The two biggest are efficiency-draining corruption and the enormous dependence on hydrocarbons and raw materials as revenue-generators — especially as oil production levels taper off in the next few years.

Medvedev broke rhetorical ground by calling on the need to remove obstacles to modernization and diversify Russia’s economy beyond oil and natural gas. For example, in August he called on an audience of government officials to spur new investment in Russia. “We have been fighting on and on against administrative barriers, but new ones keep cropping up again and again,” Medvedev was quoted as saying by Reuters. “If we don’t improve the investment climate, we will not be able to move forward.”

Unfortunately, while his willingness to criticize the economic path laid in large part by Putin, as well as his focus on rule of law and government transparency, have all been welcomed, Medvedev has no significant legislative accomplishments to accompany his rhetorical shift. “He will admit himself that he talks a good game but very little has happened,” said Lohr.

Consequently, economic reforms are long overdue, but few experts see them happening under a Putin administration, which could in theory run until 2024 under the new six-year terms. For one thing, all business goes through the Kremlin, where the ex-KGB official has consolidated his power. Foreign investors have long been wary of Moscow’s crony-driven business environment, where bribes are routine and connections, not merit, make the contract. And crossing Putin can have dangerous repercussions. Moguls such as Mikhail Khodorkovsky have paid a heavy price for challenging his authority.

An even larger problem could be that the dependence on hydrocarbons is largely a product of Putin’s own doing. He was instrumental in the growth of behemoth state companies like Rosneft and Gazprom, which today dominate the economy. There is also some evidence that the emergence of this monopolized system was not a matter of expediency, but rather the result of Putin’s deepest economic convictions. He used to speak regularly about hydrocarbons paving the way for Russia’s future, and, as the New York Times reported in September, his master’s thesis was on the need for state-owned companies as a vehicle for growth. Indeed, Putin has disparaged the fall of the Soviet Union as “the greatest geopolitical catastrophe” of the 20th century.

Despite his apparent distain for Western-style capitalism, most analysts see Putin as a pragmatist more than an ideologue, and don’t think his philosophy will be the primary obstacle to Russia’s modernization. Putin was thought to be supportive of Medvedev’s reformist push, under the logic that without Putin’s tacit support, Medvedev never would have dared to call for a change of course. Putin himself has also given some signals that he will continue plans to diversify the economy. Of course, with the prospect of a new recession threatening to send oil prices tumbling, and with increased worldwide shale gas production eating into Russia’s advantages in natural gas, he has little choice.

Yet pessimism lingers that Putin, while enjoying greater prestige than Medvedev, will not be determined or even able enough to overcome the bureaucracy’s entrenched barriers to modernization. “I wouldn’t be at all surprised to see another round of reform attempts,” Lohr said. “The problem is that he seems unwilling to push them hard or to really challenge corruption at the highest levels.”

Another significant problem facing the next administration is demographic: Russia is confronting a population decline that threatens to tip into catastrophe. In a recent essay for Foreign Affairs, demographer Nicholas Eberstadt, who labeled the issue a “devastating and highly anomalous peacetime population crisis,” laid out the problem in stark detail.

“Between 1987 and 1993, the number of births in Russia dropped precipitously, from 2.5 million to 1.4 million, and it ultimately fell to 1.2 million in 1999, before commencing a turnaround of sorts,” Eberstadt wrote. “In 2010, Russia celebrated 1.79 million births, the highest national total in 20 years. Even so, this total was 25 percent lower than a quarter century earlier and represented a pattern that, if continued, would average out to a long-term fertility level of just over 1.5 births per woman, which is 27 percent below the level required for long-term population stability.”

Such alarming statistics, which reflect a reality that has not received sufficient attention from Putin and his clique, are peppered throughout Eberstadt’s piece. And aside from sliding birth rates, mortality rates in Russia are extremely high for a country of its level of development, thanks in large part to the prevalence of vices like smoking, alcoholism and drug abuse.

One solution to alleviate the declining population while generating economic growth is, of course, immigration. However, United Russia is allied with nationalist groups whose virulent xenophobia complicates any potential push for greater immigration flows.

Lohr says that Putin bears much of the responsibility for the depth of Russia’s stagnation because he has permitted “anti-immigrant nationalist groups to rant pretty freely against the immigration that Russia desperately needs for economic growth. Nothing can be done about declining birth rates. It has happened in every modern industrialized country. The only answer is more immigration.”

Putin’s return to the scene also promises to complicate America’s dealings with Russia. The oft-cited “reset” policy pursued by the Obama administration helped the two nations overcome many of the tensions that prevailed during the later stages of the Bush administration and has led to some tangible achievements. The most prominent of these was the New START nuclear treaty, which halved the number of strategic missile launchers in each nation.

However, much of this improvement seems to have been based on the personal rapport between Obama and Medvedev. It would be a stretch to say that the Obama administration tried to sideline Putin — it more than likely knew full well who was running the show — but it conspicuously sought to deal with Medvedev rather than Putin, perhaps in a bid to shore up the former, despite the latter’s centrality to Russian politics and his not-insignificant formal position of prime minister.

Now, the man in the background is going to be back front and center once more. “Unfortunately, they based [the reset policy] on a gamble that they could bolster Medvedev and play him up as an alternative to Putin,” Balzer observed. “With Putin coming back, that’s going to be a serious problem…. He certainly is not going to forget that our government would have preferred Medvedev.”