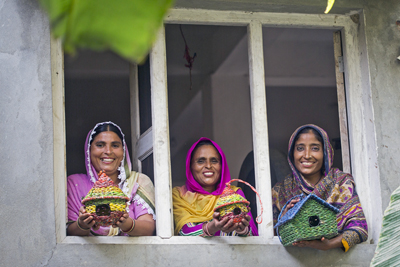 Women in Moradabad, India, weave birdhouses from recycled materials that they sell through Ten Thousand Villages.

A scarf from Laos, a basket from India, a pitcher from Indonesia — unique, handmade objects from around the world can be found at shops in the D.C. area that are dedicated to preserving the local traditions behind the crafts as well as promoting the economic empowerment of their creators.

With about 50 stores scattered around the country — locally, one is in Alexandria, Va., while others can be found in Baltimore and Hagerstown, Md. — Ten Thousand Villages allows visitors to browse and buy goods from artisans around the world. The makers, all from developing countries, build long-term relationships with Ten Thousand Villages to sell their goods — and it’s all fair trade.

“People understand that what they’re giving is not just a beautiful gift. What it represents is real empowerment, economically and socially, for people around the world, in particular women,” Becca Stamp, the marketing communications manager at Ten Thousand Villages, told The Washington Diplomat.

As the nation’s largest fair trade retailer, Ten Thousand Villages has impacted the lives of 20,000 artisans around the world and generated $140 million in sustainable income for them since its founding in 1946. In addition to the retail stores, goods ranging from jewelry to handbags to vases are also available online, or through 200 various wholesale accounts around the country. The products come from about 30 developing countries, and the majority of the artisan groups the organization works with are women, according to Stamp.

“We do focus on women because we know that in a lot of the communities we work in that is the key factor in helping families break the cycle of poverty,” Stamp said. “When a woman can earn her own income, that might be what enables them to send their children to school or make that difference. A lot of times, the woman’s income through fair trade is the most reliable source of income that family has.” 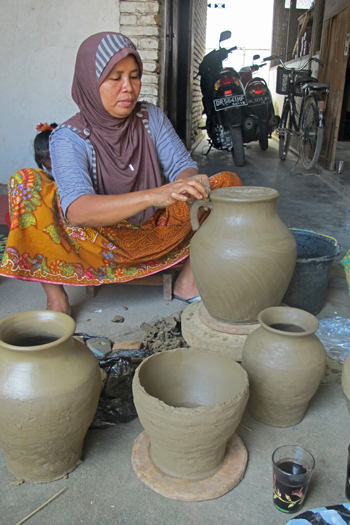 In Lombok, Indonesia, women create earthenware pottery in the same tradition as their ancestors.

In total, Ten Thousand Villages features products made by about 80 to 100 different artisan groups. And the group’s business model is particularly noteworthy. It’s all about making long-term commitments to the artisans, Stamp said.

“We don’t just buy from them one time. We don’t just look for a product and then walk away. When we enter into a relationship with an artisan group, it is for a long period of time. And like any relationship, the key to that is communication,” she said.

The company’s buyers and designers work with the artisan groups to take the skills they have — often traditional skills such as basket weaving or pottery — and help them develop designs that will both preserve that tradition and also sell in the United States.

“We’re bringing them here to the United States where there is a market, whereas in their home country there often is not a market for that particular handicraft,” she said.

And they’re paying the groups in advance. Ten Thousand Villages places up to a 50 percent advance on an order.

“That way artisan groups can use that money to purchase the materials they need without going in debt,” she said.

And once the completed order has been shipped, typically by sea, the makers are paid in full.

“So by the time a product reaches our shelves or our warehouse, the artisan group has already been paid in full for it,” Stamp said. “We really make a commitment to that order — no matter what happens for some of the groups that we work with who have challenges. There are rolling blackouts in some countries, there’s monsoon season that we need to work around, just the political intricacies.

“Because we’ve made this commitment, the groups are not responsible for those sorts of things,” Stamp added. “So it’s a little bit riskier for us, but we know that kind of sustainability and that kind of consistency is what will make a difference for them to be a successful business.”

Stamp, who has been with the business for six years, recalled her own personal story about what makes Ten Thousand Villages such a special shopping experience. One of the artisan groups they work with is the Lombok Pottery Cooperative, women potters in Indonesia who make earthenware pottery. When a woman retires, she does so with a pension and the ability to pass her membership on to daughters or other female family members who are over the age of 18, Stamp said. 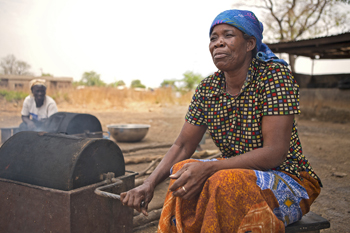 Ten Thousand Villages sells goods made by artisans all over the world. Lasiche Haruna works with a women’s cooperative processing shea butter in rural northern Ghana.

“They use a turntable, it’s not even a pottery wheel. Their tools are a twig for measuring, maybe a pencil for etching. They basically hand shape from clay that’s dug locally there in Indonesia these beautiful, amazing pieces of pottery in the same way that their ancestors were doing 300 years ago,” Stamp said. “And in that particular area, there are few opportunities for economic empowerment, but this group has given the women the opportunity to earn their own income. And they’ve been able to send their kids to school and many of them onto universities.”

Stamp gave a pitcher from the cooperative to her mom. “That’s the thing behind so many of our products — the tradition behind the craft or the empowerment that it represents, in particular for women, it just makes them really meaningful gifts,” she said. “It was a really meaningful gift to give my own mother. And we hear those stories a lot.”

Stepping into a Ten Thousand Villages shop offers a sense that “so much of the world is represented,” Stamp noted, thanks to the wide variety of traditional craft and global culture on offer.

“And one of the things we are trying to do is make sure we help artisan groups, we work with them — it’s a collaboration — to try and help them develop the most successful product,” she said. “But we want to do that in a way that allows them to use traditional skills and preserve some of their cultural heritage.”

Each product on the shelves “represents an opportunity for someone in a developing country,” Stamp told The Diplomat.

“That piece might be the thing that makes the difference for their family, that sends the child to school, that helps them literally put a roof over their heads, build a warmer, safer home, get their children the medicine they need.”