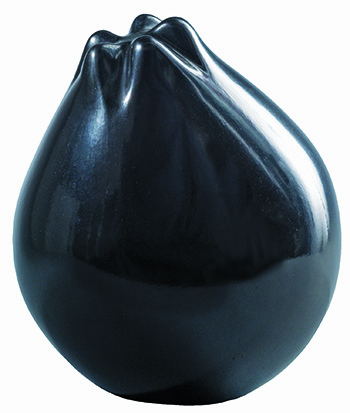 On a trip to a scorched stretch of the U.S.-Mexico border in southern Arizona, Albuquerque artist Jami Porter Lara found ancient shards of pottery in the dusty earth along with a trail of empty plastic water bottles discarded by immigrants during their furtive treks into America, seeking the elusive promise of work or refuge from strife in their homelands.

Porter Lara didn’t see just trash that has clogged our landfills and oceans and even infiltrated our bodies. She saw a modern archaeological record of future artifacts and a certain beauty in linking plastic bottles with more fragile clay vessels that carried life-sustaining water centuries before white conquerors drew arbitrary lines on maps that divided people and cultures. Twenty-five of her strangely beautiful blackware pottery sculptures inspired by plastic bottles are on display in “Border Crossing” at the National Museum of Women in the Arts (NMWA).

Many of the sculptures resemble plastic bottles only in the loosest sense. The bulbous forms with their dark, luminous sheen twist in undulating forms like some lost altar piece from a forgotten religion or an alien vessel whose purpose is unknown. Some resemble elegant vases with threaded openings like the mouth of a plastic bottle.

The exhibition’s title references the crossing of borders both political and geographical, from the ancient to the ephemeral. “I want to expose the porous nature of ‘borders’ as well as the ‘nature’ of art and garbage, and to record my interest in the permeability of all things human, natural and technological,” Porter Lara says.

Her work has become timelier with the specter of President Donald Trump’s xenophobic plans to build a border wall and his delusional claims that Mexico will pay for it.

“It is an absurd proposition. This is not an issue of national security. It’s about the defense of whiteness,” Porter Lara said. “The border is this relatively recent fiction. Despite all efforts to defend it, it’s permeable.”

The exhibition is paired with “New Ground,” an exhibition of pottery by famed New Mexico potter Maria Martinez and Laura Gilpin’s platinum-and-silver gelatin prints from the 1930s to 1960s of Navajo and Pueblo people, along with vast Southwestern landscapes she shot from a small plane buzzing dangerously close to the ground.

Porter Lara is a former software engineer who attended art school in Albuquerque when she was 40 years old with students half her age. Now seven years later, she has a solo exhibition in a national art museum, which is a testament to the strength of her work and her dedication to reinvent herself.

The only real misstep in the exhibition are Porter Lara’s titles for her work. She created her own faux archaeological classification system for each piece based on when, where and how it was made. But it’s just a confusing distraction to call an elegant sculpture “LDS-MHB-3SBR-0916CE-01” or “LDS-MHB-2LBR-0515CE-05.”

Porter Lara uses the same traditional pottery techniques as Martinez, who pinched and smoothed coils of clay before firing them. Martinez covered her fire with cow manure to create blackware pottery starved of oxygen while Porter Lara uses a galvanized tub in a charred pit in her front yard. Martinez departed from her Pueblo tradition of redware pottery to create innovative blackware pottery that she started to sign as she attracted the attention of art collectors. Many of her beautiful pots and plates, some decorated with images of feathers or the Avanyu horned serpent known as a water guardian, were specifically made for the art market.

Martinez was a longtime friend of Gilpin, and her photos in the exhibition include Martinez making pottery or baking bread in an adobe horno oven and her smiling young grandson dressed in leather leggings preparing for his first ceremonial dance. Gilpin spent decades photographing Pueblo and Navajo people, lugging a large-format camera into remote locales at a time when few white or female photographers were working in the Southwest. Her intimate images don’t feel stiff or scripted like some staged anthropological record. She also documented other artisans, including silversmiths and weavers, who were continuing an unbroken tradition in a world that was rapidly fraying around them. Her photos of twisting rivers and rocky canyons portray the epic expanse of the Southwest, or at least the small window into that world that can be contained in a photograph. 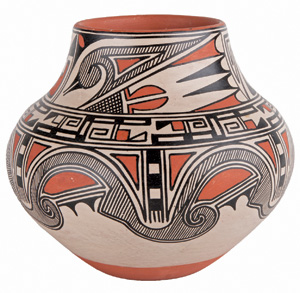 For seven years before moving to Washington, D.C., I lived in Santa Fe and then in a small village tucked in the foothills of the Sangre de Cristo Mountains. Behind the ranch-style house where I lived in Rio en Medio, melting snow traveled down an acequia irrigation ditch into the rows of a garden of corn and radishes planted by Tino Trujillo, my landlord and a silversmith who crafted wonders from hammered silver and aqua turquoise. New Mexico is the only place I have lived where I felt a physical and even spiritual connection to the land beneath me and the truly endless sweep of a vast horizon. My view is usually limited now to the next street corner, and the earth, that elemental source of food and life, is paved over with asphalt.

National Museum of Women in the Arts