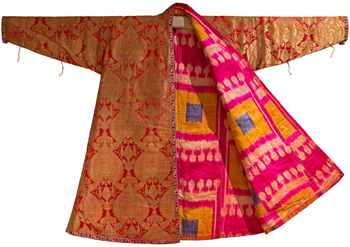 Among the items on display at the new Textile Museum and George Washington University Museum is a 19th-centry robe from Uzbekistan.

At first blush, it doesn’t really make sense. Merging a textile museum that focuses on non-Western pieces with a private collection of hyper-local Washington memorabilia sounds as mixable as oil and water.

But a closer look reveals a juxtaposition that is quite representative of D.C. — a combination of cultures and history uniting in one capital.

The Small Collection — along with the Small Center for National Capital Area Studies — resides in the newly renovated 7,000-square-foot Maxwell Woodhull House, built in 1855, while the Textile Museum is housed in a new 46,000-square-foot space that also includes the Arthur D. Jenkins Library, which with 20,000 volumes is the world’s oldest library devoted exclusively to the textile arts. It is the largest university museum in Washington.

“The idea came to just merge the two entities and build a new museum right alongside the Woodhull House and make one attraction that would at once feature Washington history and at the same time feature textiles of a truly global nature,” said John Wetenhall, director of the new museum. “If you look at the material of the objects, they look quite different, but if you look at the themes, you can see how they relate.” 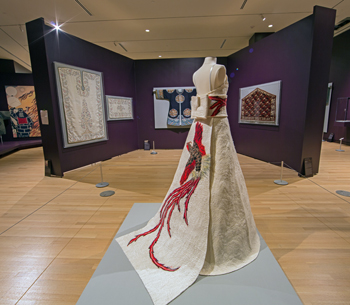 That idea comes across in the museum’s three opening exhibitions. “Unraveling Identity: Our Textiles, Our Stories,” through Aug. 9, showcases the largest number of works from the Textile Museum’s collections ever displayed (it has about 19,000 pieces). That’s partly because the facility is twice the size of the old one, which was situated at S Street, NW, and closed in 2013 (the museum’s historic Kalorama property recently sold for $19 million).

“The ‘Identity’ exhibition was intended to show the vast array and the quality of the textile collection through the lens of how people live,” Wetenhall said. For example, a pair of tiny Chinese slippers intended for bound feet sits next to singer Mae West’s platform shoes, demonstrating how different cultures take different approaches to essentially the same end.

The other two exhibitions are derived from the 1,000 artifacts in the Small Collection: “Seat of Empire: Planning Washington, 1790-1801,” and “The Civil War and the Making of Modern Washington,” both through Oct. 15. The first uses historical maps and images to show how early urban design shaped the city, while the latter follows the city’s evolution from the Revolutionary Way through Reconstruction. It features maps, prints and illustrations of federal buildings, barracks, hospitals, hotels and markets.

The new Textile Museum has added more context to display labels and put up touch screens where visitors can see textiles from other cultures as they relate to what’s in front of them, Wetenhall said. “It’s meant to be a very accessible,” he said.

In addition to being more accessible, the new museum aims to make textiles more interesting, shedding light on their artistic merit and cultural significance. The Textile Museum’s collections span the Middle East, Asia, Africa and the indigenous peoples of the Americas, and include Egyptian mummy wraps from the Pharaonic era and one of the world’s premier collections of carpets from Islamic cultures. Its oldest textiles are fragments from 2500 B.C. to 3000 B.C. 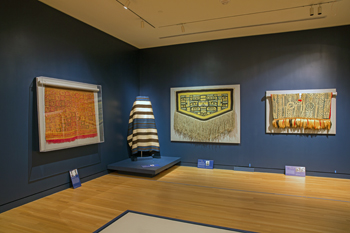 The Small Collection includes a letter George Washington wrote to Congress in 1790 outlining the 10 square miles that would be the capital, a hand-drawn map that shows the rivers and road that ran from Georgetown to Anacostia and a bandana with the design of the first engraved map of Washington.

The next exhibition will feature photographs from China at the turn of the 20th century, and the museum is working with the Embassy of Japan on an exhibit for next year that will feature “treasures of Okinawa museums,” Wetenhall said.

“The Textile Museum has a long and expansive relationship with embassies and delegations throughout the city,” he said. “There have been a lot of embassies and countries that have supported textile exhibitions over the years because they are, after all, internationally based, and they’re forms of display of cultures of many and diverse countries.”

In fact, the Textile Museum was often called a hidden cultural gem. From its newfound perch on GW’s Foggy Bottom campus, it will enjoy expanded programming and the security of being affiliated with a top-notch university. 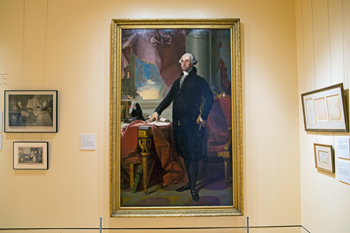 The Textile Museum is not the first to merge with a university, although such partnerships can be “counted in the tens, not hundreds,” Wetenhall said. This particular move is especially mutually beneficial, however. Besides getting more space in Foggy Bottom, the Textile Museum also has a 22,000- square-foot conservation and collections center at GW’s Virginia Science and Technology Campus in Ashburn and access to support from GW’s communications, legal, facilities and technologies departments.

The school wins because it already is well known for graduating professionals from its museum studies programs in the Columbian College of Arts and Sciences, but now faculty are co-curating exhibits and the museum’s monthly attendance has doubled in part because of interest from the academic community, Wetenhall said.

Unraveling Identity: Our Textiles, Our Stories

The George Washington University Museum and the Textile Museum