Home The Washington Diplomat December 2013 The Cancer Test You May Want to Skip, But Shouldn’t 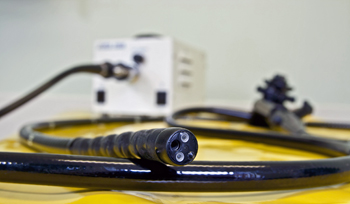 The last several years have been punctuated with a series of headlines about two common cancer-screening tests: mammography for breast cancer and PSA (prostate-specific antigen) testing for prostate cancer.

Should women with no major risk factors for breast cancer get regular annual screening mammograms starting at age 40, as the American Cancer Society recommends, or biennial mammograms starting at 50, as the U.S. Preventive Services Task Force recommends? Should men over 50 get yearly PSA tests, or not? The answers you get to these questions often depend on which medical professional you ask.

A flexible medical endoscope is used during a colonoscopy. As much as the cancer screening test itself frightens patients, the preparation involved — including a powerful “purgative” drug to clean out your bowels — can be just as intimidating.

But there’s one cancer screening test universally acknowledged to be effective — and yet, one out of every three people who should be getting it does not.

I’m talking about screening for colorectal cancer in people ages 50 to 75. Colorectal cancer kills 50,000 Americans every year and is the leading killer of nonsmokers in the United States.

The latest figures from the U.S. Centers for Disease Control and Prevention, released Nov. 5, found that only 65 percent of men and women in the 50-75 age group have been screened for colon cancer. That translates into 23 million people skipping an important test, despite the fact that colon cancer screenings have been found to cut the risk of developing colon cancer by some 40 percent. (Some 90 percent of colorectal cancers are curable if caught early.)

The most common screening test for colon cancer is the colonoscopy. It has several advantages: It only has to be done every 10 years (as compared to annually for the other primary screening exam, a fecal blood test), it examines the entire colon, and it is unlikely to produce “false positive” test results when no cancer or precancerous polyps are present in the colon.

Colonoscopy is also more expensive than fecal testing, but because nearly 75 percent of the people who aren’t up to date on their colon cancer screening have insurance, it’s probably not the expense that is the big hurdle for most people. For many people, the deterrent is far more likely to be the “yuck factor” of the test itself. It’s not fun having your breasts squeezed between two mammography plates, but a colonoscopy is a different matter entirely.

The colonoscopy itself — although it’s taken under sedation or anesthesia — isn’t the part of the test that most people dread. Instead, it’s the preparation, which requires taking a powerful “purgative” drug to clean out your bowels, and then spending most of the day within dashing distance — if not actually in — your bathroom. (This is necessary because the rectum and lower intestines have to be totally empty so that the intestinal walls can be seen.)

The Colon Cancer Alliance offers a set of tips on its website to make this process a little bit less unpleasant. A few highlights:

• Drink as much water as you can in the days before prep, and on the day of.

• Don’t be embarrassed — stock up on diaper cream and use it early and often.

• Cold goes down easier. If your doctor says it’s OK, refrigerate your prep drink so that it’s very well chilled, but not frozen.

But if you still just can’t stand the thought of a colonoscopy (or its prep), then there’s another alternative: a fecal occult blood test (FOBT), done annually. It must be done every year, and it obviously doesn’t scan the entire colon for polyps, but when done correctly, it is equally effective at saving lives. If your doctor doesn’t mention it, ask him; don’t assume a colonoscopy is your only option.

Choose whichever test you prefer — just choose one, and schedule it. “We encourage health care providers to talk to their patients about getting tested and about the choice of tests,” said Dr. Thomas Frieden, director of the Centers for Disease Control and Prevention. “The bottom line is, the best test is a test that gets done.”