Home The Washington Diplomat October 2015 The City Built Upon A Steep, Expensive Hill 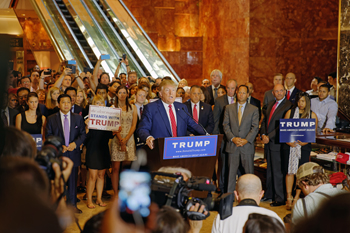 Settlers in 17th-century America fancied their new home a “city upon a hill,” and U.S. politicians still invoke that idealistic metaphor today when trying to inspire fledgling democracies. American elections in the 21st century certainly command attention across the globe. Whether that attention is out of admiration or gawking curiosity is an open question.

The two-year interval between mid-term and general elections means that career politicians have another job while in office: raising money. Meanwhile, the 2010 decision by the Supreme Court to do away with limits on outside spending on campaigns has opened the floodgates to funding that is arguably less accountable. But while foreign observers may scratch their heads at these two peculiar traits of American democracy, veterans of U.S. campaigns still find themselves in demand overseas. The contradictory spectacle of 21st-century American democracy, which inspires both respect and bewilderment, is one that Alexis de Tocqueville, the famous French observer of 19th-century U.S. politics, might recognize.

Candidate to End Other Candidates

Larry Lessig’s presidential candidacy is perhaps a sign of the times. The Harvard law professor is running on the promise to make American democracy more accessible to the commoner and less beholden to the rich. His platform includes redrawing political districts for equal citizen representation and giving voters vouchers to fund presidential and congressional campaigns.

After meeting with the Republican National Committee, GOP presidential frontrunner Donald Trump greets supporters at Trump Tower last month to declare that he has signed a “loyalty pledge” promising to support the party’s eventual nominee and not run as a third-party candidate.

“One of the problems is that the United States is sui generis,” Lessig, who is running for the Democratic nomination, said in an interview. “It’s got its own constitutional tradition … which limits the opportunity of Congress to deal with this issue in ways that other countries deal with this issue.”

Lessig, who says he will resign the presidency after ushering through his political reform package, offered parliamentary democracies as an example of the correlation between the length of election cycles and the amount of money fueling them. The ability to call snap elections restricts the need for fundraising, leading to a campaign that is measured in weeks rather than years, he said.

Many Western nations, such as Canada and Britain, employ parliamentary democracies, whereby the party (or coalition of parties) with the greatest representation in parliament appoints its leader to head the government. In parliamentary democracies, legislation can be easier to pass — because the ruling party controls both the legislative and executive branches — and elections can be called at any time if the majority party loses a vote of no confidence. Nonetheless, while Lessig said it “might make sense” to consider shortening the U.S. campaign period, he warned that doing so might have the dangerous consequence of empowering incumbents.

Donald Trump, the blustery billionaire who has led polling for the 2016 Republican presidential nomination, has brought needed attention to the influence of money in politics, Lessig said. Trump has “been very helpful in opening this issue up beyond the narrow scope of what the Democrats have been talking about,” the Harvard law professor said. Attention, after all, is what Trump commands: In the first Republican presidential debate, the real estate magnate bragged about his past donations to his rivals onstage, openly admitting that he was buying their influence.

There is, of course, a difference between the recognition of a problem and the belief that it can be addressed. Lessig likes to cite a 2013 poll that showed 96 percent of Americans surveyed thought it important to lessen money’s influence on politics, but 91 percent believed that wasn’t possible. Putting a dent in that apparent cynicism is a possible yardstick for Lessig’s long-shot campaign, and the candidate, naturally, thinks he’s up to the task. Once people understand the scope of the challenge of lessening the hold of the purse on politics, “they can understand the thinking behind this more … that we have to create some kind of super-mandate to make this kind of reform possible,” Lessig said.

Kyle Kondik, a political analyst who manages an influential daily newsletter published by the University of Virginia Center for Politics, said the connection between money and lengthy election campaign cycles looks here to stay. “Money is a big reason why the campaign is so long and there’s nothing I [can] see on the horizon that would reduce the amount of money in politics, so I think you’re stuck with the longer campaign,” he told The Diplomat. 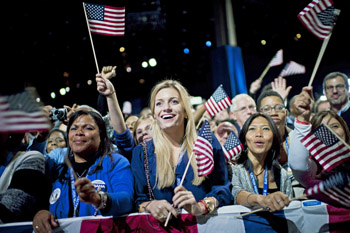 That inertia might be due to the fact that, Lessig notwithstanding, candidates seem to have little incentive to reform campaign financing because, as Kondik put it, “you can’t unilaterally disarm.”

Conventional wisdom that U.S. political campaigns grow longer with each cycle, however, is belied by the fact that the Democratic and Republican parties have pushed states’ primary contests back on the calendar. The Iowa primary is slated for Feb. 1, 2016; it was held a month earlier in 2012. “Both parties have reduced the number of debates this time, which, I think, is also a way for them to sort of exert a little bit more control over the process,” Kondik said.

There is also an element of pageantry rather than substance to the early proceedings, according to Kondik, who has briefed foreign embassies in Washington on the potential policy implications of U.S. elections. “You can almost look at the early primary process as being a stage play for rich donors because that’s who the audience is,” he said. “While the political process is always churning, that doesn’t necessarily mean that the public is actively engaged in the campaign in America.”

“There’s a disgust here in Europe that there’s so much money involved in American politics, which differs markedly from a parliamentary system here in Germany,” said David-Wilp, a senior fellow at the German Marshall Fund of the United States. Yet there is also admiration in Europe for “how professional [U.S.] campaigns [are], how they’re run and how much scripting and planning goes into the campaign process,” she added. 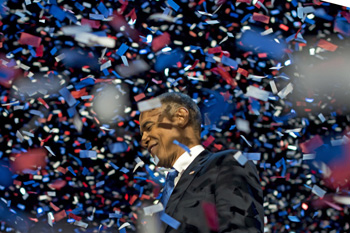 President Obama is blanketed by confetti after winning re-election in 2012.

“German policymakers can’t fathom having to campaign in two-year cycles when it comes to the House of Representatives, and to spend over 50 percent of your time fundraising,” David-Wilp told The Diplomat. That bewilderment can lead Europeans to assume “that there’s no time for [U.S.] policymakers to think … about long-term issues,” she added.

The paradoxes of American society get plenty of European airtime during the election season, David-Wilp said. “The U.S. is full of contradictions and that’s something [Americans] celebrate, whereas sometimes here it’s hard for people to get their head around” debates over issues like guns, capital punishment and how civil liberties are viewed vis-à-vis security programs, she said. Part of that European perplexity might be “the images that the media distills here are very one-sided and also like to harp on the exception rather than what, really, America is like across the board and day by day,” she added.

The American spectacle is on full display in European media during U.S. election season, perhaps more so this cycle with the emergence of Trump, who arguably embodies an American stereotype of profligacy and brashness in European eyes. But while Europeans seem to be watching the early stages of the American presidential election now, they, like American voters, may have also learned to distinguish between the carnival of the campaign and the presidential policy that succeeds it.

Moreover, despite months of incessant media coverage and speculation on both sides of the Atlantic, the actual U.S. presidential election is still over a year away — a lifetime on the political calendar. A lot can and will happen before voters go to the polls next November.

A recent observation from Nathan Gonzales, a political analyst, put things in perspective. “Things that will happen before any [U.S.] presidential primaries take place: 1) Star Wars Episode VII released, 2) new college FB national champion,” he tweeted, referring to the college football contest for supremacy that ends shortly after the new year. To translate that for a European audience: A king of European soccer will be crowned in the 2016 Champions League several months before the next leader of the United States is anointed.