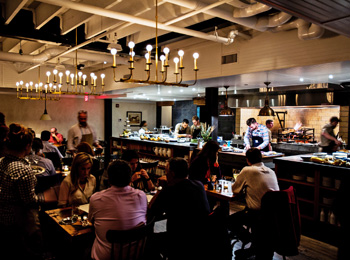 Chef Jeremiah Langhorne works in an open kitchen at the Dabney, his rustic ode to Mid-Atlantic cuisine in the Shaw neighborhood.

Over the past year, no restaurant in Washington has generated as much buzz as the Dabney, chef Jeremiah Langhorne’s rustic ode to Mid-Atlantic cuisine.

The day after we dined at the funky-yet-elegant eight-month-old eatery in the Shaw neighborhood in June, Food & Wine magazine named it one of the 10 best restaurants in America. Earlier, it ranked number eight on the Washington Post’s list of 10 best new restaurants. It’s easy to understand why. From the warm ambience, to the service, to the intriguing menu, to the dramatic flair of the kitchen, to the dazzling flavors bursting off the plates, the Dabney consistently hits impressive notes.

But first: Plan ahead to get a table. Last we checked in mid-June, the Dabney’s 55 seats were booked solid almost three weeks in advance. We managed to snag a reservation at 5:30 p.m. on Wednesday — not an ideal booking — but we took what we could get. We’re immensely glad we did.

Langhorne, a 31-year-old D.C. native who honed his culinary chops on the inventive and competitive food scene in Charleston, S.C., is fiercely committed to local ingredients. In fact, he says an impressive 90 percent of everything on his menu is sourced from local and regional farmers, or from the small garden on the roof of his restaurant. Indeed, much of what arrived at our table tasted almost freakishly fresh. 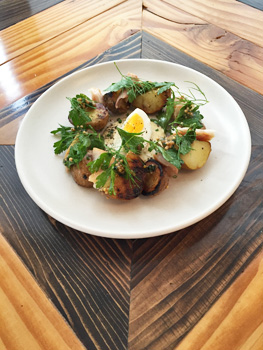 Lightly smoked Atlantic mackerel at the Dabney is presented with chunks of mackerel resting on a pinwheel of potatoes and greens centered by a sliced, soft-boiled egg.

Take, for example, a bowl of strawberry gazpacho with Maryland blue crab and lime topped with “anise hyssop,” or a few leaves of locally grown, glistening green mint. Beautiful to behold and equally impressive on the palate, the chilled soup had a slight crunch, rendering it almost as more of a compote than a soup. The combination of organic strawberries (none of those genetically engineered, store-bought berries here), lime and mint was tart and sweet, without being cloying. Delicate slivers of white crab meat added a subtle, briny complexity. The gazpacho was a terrifically flavorful and perfectly seasonal start to an early summer dinner.

Next up was lightly smoked Atlantic mackerel with a confit potato salad, parsley, dill and egg. This dish was also beautifully presented, with chunks of mackerel resting on a pinwheel of potatoes and greens centered by a sliced, soft-boiled egg whose yolk was still a bit gooey. A touch of smoky-tangy mustard hid subtly in the mix, accentuating the mackerel’s rich flavor.

Diners at the Dabney can take one of two approaches to their meal. Either order two or three (or four if you’re really hungry) small plates apiece, or share one of the main entrée selections and order a couple of smaller plates and maybe a side dish or two to round out the meal. We opted for the latter approach.

Our final small plate order — a dish of Chesapeake rockfish — was perhaps the only misstep of the meal. It’s not that the rockfish was bad; on the contrary, it was quite tender and flavorful. But for $17, the portion size — barely the size of half a deck of cards — was absurd. The delicate chunk of fish was scattered with butter-poached leek, snap peas, a small dollop of meyer lemon custard, lettuce and tarragon. Again, it made for a lovely presentation, prompting my friend to note that it felt as if we were “eating a work of art.” Indeed. Unfortunately, this culinary picture wasn’t worth the price. 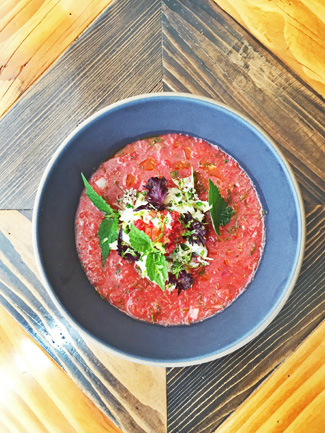 At the Dabney, a bowl of strawberry gazpacho with Maryland blue crab and lime topped with a few leaves of locally grown, glistening green mint is beautiful to behold and equally impressive on the palate.

Our main entrée — an order of roasted pork loin from Whistle Pig Hollow farm in Reisterstown, Md. — put us back on track. The meat was plentiful and tender, served with smoked potatoes and grilled green garlic, radish and broccoli rabe. While the pork was delectable, especially those charred ends of the loin, we both raved about the smoked potatoes lightly dressed in a tangy, creamy hollandaise-style sauce.

We note that the potatoes were smoked, not traditionally baked or roasted as in so many kitchens. Langhorne relies on an old-school hearth to fire his kitchen instead of fancy modern stoves and ovens, and it gives him inspiration to do things normal kitchens don’t. Long sticks of oak and hickory stacked into a box burned ferociously in the center of the kitchen throughout our meal, with the embers heating a grill, griddle and other cooking devices. A giant — and somehow quiet — ventilation system sucks the smoke and heat up and away from the dining room.

On the night we had dinner at the Dabney, Langhorne was front and center in the open kitchen, announcing orders, directing his cooks and occasionally conferring with servers and even diners. In fact, one of the most enjoyable elements of our meal was watching an accomplished and busy chef and his team work their magic. In D.C., at least for the moment, the Dabney is as close to culinary magic as you’ll find.

Diplomat readers, many of whom enjoy Washington’s varied and ever-evolving nightlife, have two intriguing and sophisticated new choices for enjoying a libation on the town: Ivy Room and L8. 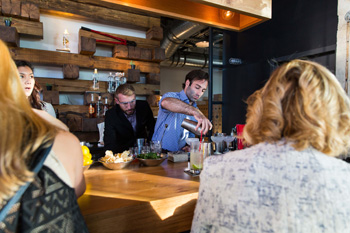 The Ivy Room is a new cocktail lounge that opened along a formerly dilapidated stretch of New York Avenue in Northeast.

The Ivy Room is a new cocktail lounge that opened in June as part of the booming brewing and distillery scene underway along a formerly dilapidated stretch of New York Avenue in Northeast. Real estate magnate Douglas Jemal has bet big on the small neighborhood known as Ivy City and his gamble is starting to pay off. Jemal converted the old Hecht’s warehouse into stylish — and rapidly filling — luxury apartments, and major national retailers such as Nike and Petco have also opened stores in the area, with more on the way.

The neighborhood is also home to Atlas Brewing Works, the Green Hat Gin distillery and Republic Restoratives Distillery, where the new Ivy Room is situated.

On June 8, co-owners Rachel Gardner and Pia Carusone, a former chief of staff for Arizona Congresswoman Gabby Giffords, welcomed Giffords and her astronaut husband Mark Kelly, as well as Rep. Ami Bera (D-Calif.), former D.C. Mayor Adrian Fenty and a couple hundred other stylishly clad Washingtonians to a grand opening party. We were impressed by the room’s minimal but warm décor — a modern combination of wood, glass and dark steel, and even more impressed by the cocktails.

The 800-square-foot space serves up a classic and refreshing Moscow Mule made with the bar’s own in-house ginger beer, a vodka tonic using a house-made tonic and Ivy Room’s signature Ivy City Swizzle, accentuated with fresh mint. 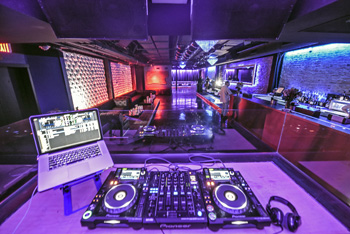 L8 nightclub is situated in an underground space near the White House.

L8 is another newcomer to the D.C.’s lounge/club scene. The nightclub is situated in an underground space near the White House that has seen a succession of clubs come and go over the past decade and a half. D.C. nightlife impresario Antonis Karagounis, who also owns Ultrabar, Soundcheck, Barcode and the live music venue Echostage, is hoping L8 will have staying power. Our first glance suggests strong potential.

If you’re looking for a high-energy night out, L8 provides an appealing new option, while the Ivy Room offers a nice place to kick back and chill with friends over cocktails. Both are welcome additions to D.C. nightlife.