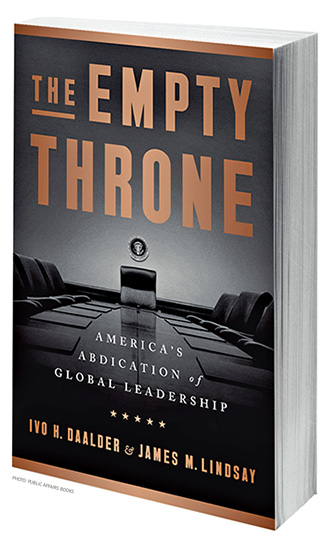 For daily journalists, covering President Donald Trump’s foreign policy is difficult — to say the least. The mercurial president’s shifting policies, jarring rhetoric, impulsive decisions and bewildering personnel moves give the administration a dizzying, even disorienting, quality. The challenge is even greater for those trying to write a book about Trump’s foreign policy. The endless cascade of provocative tweets and jolting policy pirouettes makes it very hard to achieve balanced judgments.

“The Empty Throne: America’s Abdication of Global Leadership” by Ivo H. Daalder and James M. Lindsay is an important book that chronicles the first 18 months of Trump’s foreign policy. Daalder and Lindsay offer a fair account of Trump’s basic foreign policy views, describe how these views depart from the seven-decade bipartisan consensus in the United States and analyze how the Trump revolution is affecting America’s role in the world. Put simply, they see little that has been gained by the United States during the Trump presidency and lament that much that has been lost.

“Donald Trump wagered that the United States could secure the benefits of the world it created without bearing the burdens of leading it. That bet is unlikely to pay off,” they write. “The world that America created after World War II was not inevitable. It was the result of conscious policy choices made in the pursuit of a vision of how cooperation and leadership could benefit the United States. Consumed with the costs of that rules-based order, many of which he exaggerated, Trump couldn’t appreciate its continuing and far greater benefits. Working with friends and allies multiplied American power far more often than constrained it.”

The authors bring considerable foreign policy expertise to their analysis. Daalder is the president of the Chicago Council on Global Affairs. He previously served as the U.S. ambassador to NATO under Barack Obama. Lindsay is a senior vice president at the Council on Foreign Relations. He writes “The Water’s Edge” blog and hosts “The President’s Inbox” podcast. In 2003, Daalder and Lindsay co-authored “America Unbound: The Bush Revolution in Foreign Policy.”

“The Empty Throne” begins with the now famous meeting with Trump, his national security team and senior military leaders in the Pentagon in July 2017. Then-Defense Secretary Jim Mattis told the president that America was a beneficiary of the vast network of alliances and rules that it helped create after World War II. “The greatest thing the ‘greatest generation’ left us was the rules-based postwar international order,” Mattis reportedly told Trump. But the president dissented, arguing that current arrangements were not working for the United States. “This is exactly what I don’t want,” he said.

This meeting framed the clashing world views of Trump and the American foreign policy establishment. According to Daalder and Lindsay, the prevailing establishment view is that the United States has global interests that are worth spending money on and defending; the current regime of rules, norms and international organizations have enhanced U.S. power; America’s friends and allies have helped reduce the dangers of the world; and it is wise for the United States to cultivate long-term relationships with allies, even if this requires short-term expenses and sacrifices.

Trump has never accepted this perspective. Daalder and Lindsay analyze Trump’s open letter to the American people in September 1987 that was first published in The New York Times, Washington Post and Boston Globe under the headline, “There’s Nothing Wrong with America’s Foreign Defense Policy That a Little Backbone Can’t Cure.” In this letter, Trump argues that other nations, including close allies, are exploiting the United States.

“For decades, Japan and other nations have been taking advantage of the United States,” Trump begins. “It’s time for us to end our vast deficits by making Japan and others who can afford it, pay. Our world protection is worth hundreds of billions to those countries, and their stake in their protection is far greater than ours. Make Japan, Saudi Arabia, and others pay for the protection we extend as allies…. Let’s not let our great country be laughed at anymore.”

Daalder and Lindsay say that Trump has not deviated from this view over the past 30 years and that it served as the basis for his victorious 2016 presidential campaign. During that campaign, Trump attacked the pillars of American foreign policy — the nation’s historic support of alliances, free trade, and the promotion of democracy, human rights and rule of law.

“Instead of withdrawing from the world, Trump was proposing to shed what he saw as the delusion of American global leadership. He wanted a foreign policy that would be more self-promoting, more nationalist, and utterly transactional. He wasn’t looking to build relationships. He was looking to make deals, great deals,” Daalder and Lindsay write.

The authors chronicle Trump’s attacks on America’s traditional allies in Europe and Asia over trade and security issues and rebuke him for undermining NATO, the European Union and the global free trade regime. They are appalled by Trump’s attraction to Russian President Vladimir Putin and other authoritarian leaders. “Trump’s apparent need to ingratiate himself with Putin remained one of the more puzzling elements of his tenure,” they write. “Whatever the explanation, Trump treated Putin with a respect and deference that he frequently declined to extend to allied leaders.”

Daalder and Lindsay vividly describe Trump’s wild policy shifts regarding North Korea, tracing his early threats of war to his impulsive decision to hold face-to-face talks with Kim Jong-un with little preparation. These negotiations came after he publicly undermined Secretary of State Rex Tillerson for exploring talks with North Korea. Tillerson, Trump tweeted, was “wasting his time trying to negotiate with Little Rocket Man.” Trump’s policy on North Korea has lurched from strategic patience to strategic confusion without achieving strategic coherence, according to Daalder and Lindsay.

The authors are especially critical of Trump’s provocative stance on trade, in which he pulled the United States out of the Trans-Pacific Partnership (TPP) and imposed tariffs on a number of countries, including several of America’s closest allies. They summarize Trump’s trade strategy by quoting his tweet that “trade wars are good, and easy to win.” 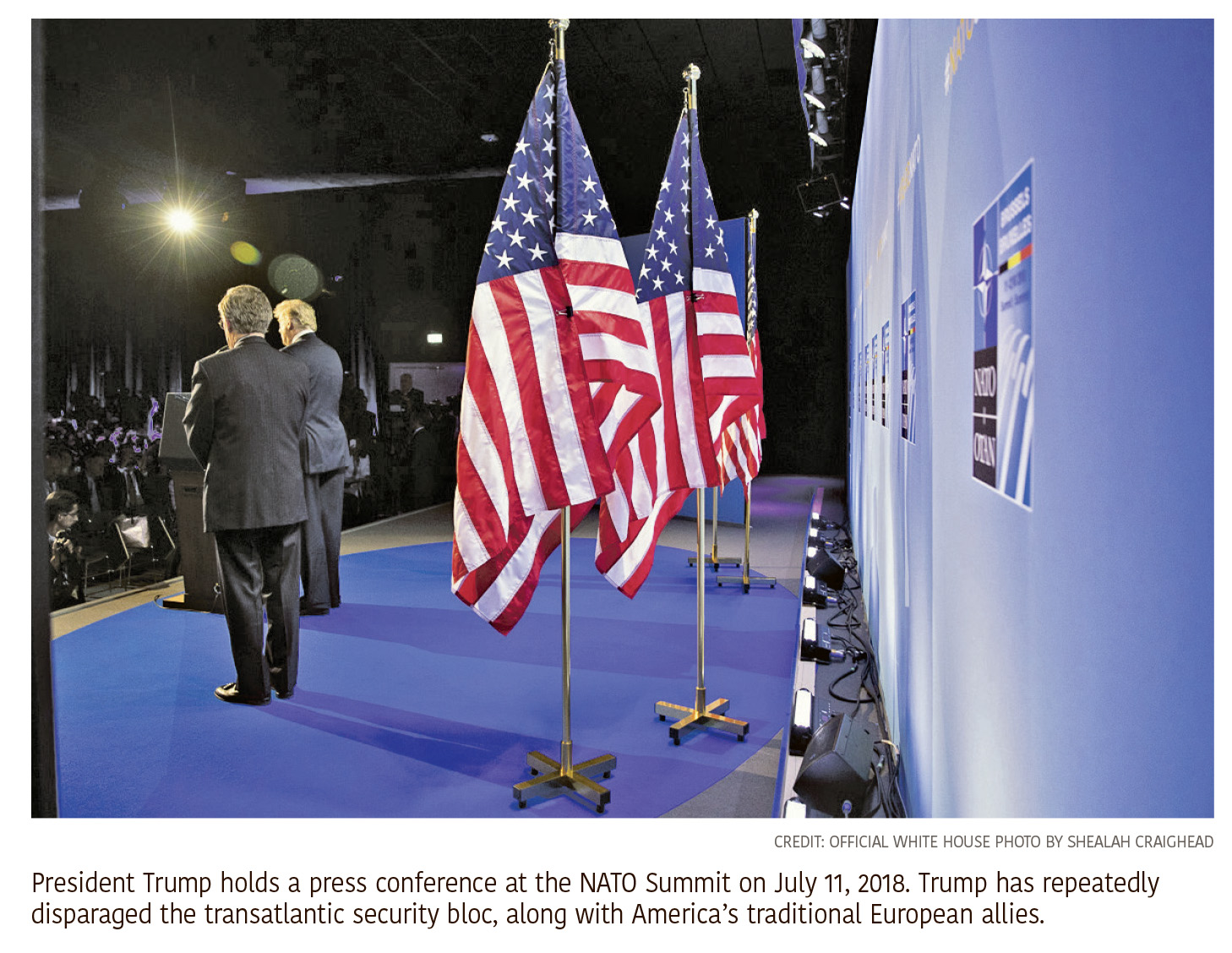 The authors argue that in the Trump administration’s first year, not a single nation showed interest in the president’s invitation to negotiate a bilateral trade deal with the United States, adding that after 18 months, Trump’s trade policy was a mess.

“Trump had achieved the worst of both worlds. He had upended relations with major trading partners, undermined international trade rules, and spurred others to cut trade deals without the United States. But he had generated few trade breakthroughs that benefited American companies or workers,” they write.

Daalder and Lindsay acknowledge that Trump kept some key campaign promises such as withdrawing from the TPP, the Paris climate accord and the Iran nuclear agreement. He also renegotiated NAFTA and moved the American Embassy in Israel to Jerusalem. But they charge he has done little to address the economic concerns of middle-class Americans, many of whom voted for him in 2016.  “Trump,” they assert, “did little for the forgotten men and women who he had championed on the campaign trail and who were to be the main beneficiaries of his America First foreign policy…. Trump’s policies emphasized theatrics. They ignored fundamentals.”

Trump is depicted in “The Empty Throne” as a deeply flawed president who is ignorant on many issues, unwilling to take advice from others, impulsive and displays little curiosity or strategic judgment. “Trump’s inflated sense of his own knowledge, his reluctance to solicit and take advice, and his tendency to pursue disruption for disruption’s sake fueled his administration’s inability to generate and execute a sustainable foreign policy strategy. In violation of the old military adage — and common sense — to avoid waging two front wars, he picked fights on multiple issues with multiple countries all at the same time.”

Daalder and Lindsay argue that the cumulative effect of Trump’s foreign policy has been to weaken the United States, undermine the rules-based international order and provide opportunities for China and Russia to assert themselves. “The bigger problem with Trump’s foreign policy was his abdication of American global leadership. He saw little value in friends and allies and he showed no interest in leading them. They were instead foes to be bullied into complying with his demands. His hostility to America’s traditional leadership role was clear to those who had long been accustomed to being led.”

The criticism of Trump’s foreign policy in “The Empty Throne” is compelling and persuasive. In fact, Mattis’s December resignation letter makes the same central point as this book does. “One core belief I have always held is that our strength as a nation is inextricably linked to the strength of our unique and comprehensive system of alliances and partnerships,” Mattis wrote. “While the U.S. remains the indispensable nation in the free world, we cannot protect our interests or serve that role effectively without maintaining strong alliances and showing respect to those allies.”

Daalder and Lindsay make it clear that the United States has been significantly damaged by the Trump presidency. It remains unclear how long-term the damage is. Will America regain some of its standing if it elects a strong internationalist president to succeed Trump in 2020 or has the election of Trump in 2016 convinced the world the United States is far too erratic to ever trust again? Only time will tell.

John T. Shaw is a contributing writer for The Washington Diplomat. He is the author of four books, including “The Ambassador: Inside the Life of a Working Diplomat” and “Rising Star, Setting Sun,” and he is the director of the Paul Simon Public Policy Institute at Southern Illinois University.