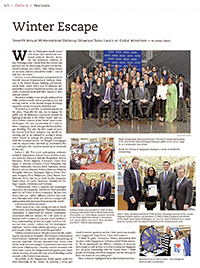 Winter in Washington usually means cold, dreary days outside and overheated political rhetoric inside. But one wintertime tradition offers Washingtonians a break from the weather and partisan wars by showcasing the power of international exchange and culture, while taking visitors on an exotic journey around the world — even if only for a few hours.

On Dec. 6, over 4,000 people participated in the Seventh Annual Winternational Embassy Showcase at the Ronald Reagan Building and International Trade Center, where over 50 embassies displayed their countries’ handmade jewelry, arts and crafts, traditional foods and other aspects of their national identity.

The festive midday event initially embraced the chilly weather outside, before growing in size and moving indoors to the Ronald Reagan Building’s expansive atrium and nearby exhibition hall.

“It started as a seed that we planted outside on the plaza. Originally the idea was to engage the public and the diplomatic community around the lighting of the tree at the White House,” said Andrew Gelfuso, director of the World Trade Center Washington, DC and vice president of TCMA (A Drew Company), which manages the Ronald Reagan Building. “But after the first couple of years, the interest level from embassies was rapidly increasing, and so we adjusted by moving it inside, which helped us manage the growing demand. With the increased interest, we thought if we engaged with the mayor’s office and built up stakeholders that we could grow this. And that turned out to absolutely be the case.” 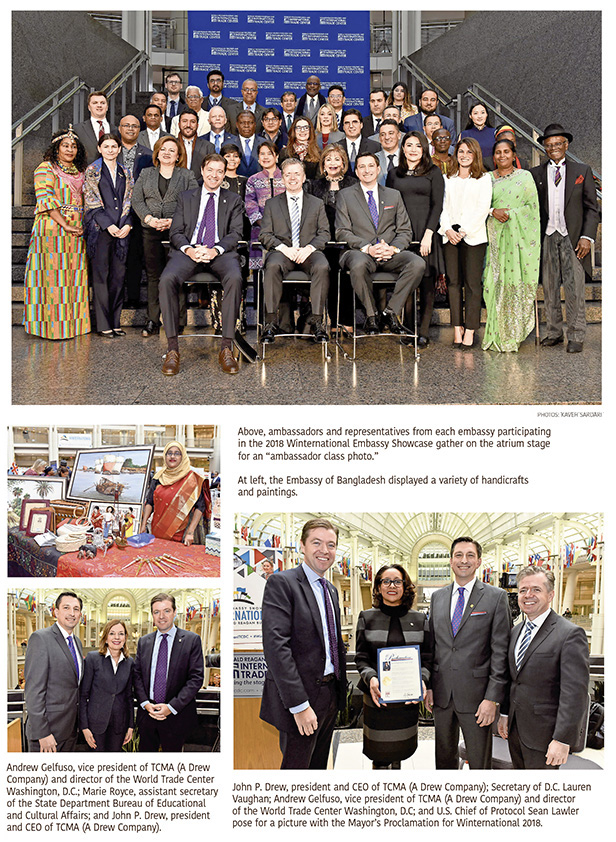 “Winternational offers a dynamic and meaningful experience for our guests,” said John P. Drew, president and CEO of TCMA (A Drew Company). “In just a few hours, they can explore different cultures and traditions through crafts, food, arts and even mingle with ambassadors and diplomats from around the world.”

“There seems to be a real craving not only on behalf of the public, but also the greater Washington business community, to understand the embassy community, understand different cultures. It’s a lot easier to do business with a country or a person when you have a basic understanding of their principles and their values and their culture,” Gelfuso told The Washington Diplomat. “And we think cultural diplomacy is an important part of that, so that’s really the goal today.”

Visitors wandered around vibrant embassy booths exploring the myriad items on display. The Embassy of Guatemala’s booth featured handmade scarves, satchels and paintings of dramatic waterfalls. Vietnam presented wind chimes made of tiny small hats and samples of green bean cake made with lotus seeds. Lithuania had Christmas wreaths decorated with dried fruits. And at the Mongolian booth, guests could check out the structure of a yurt, the tent-covered dwelling used by nomads in the Central Asian steppes.

Meanwhile, at the Singaporean booth, guests could test their knowledge of the country by spinning a trivia quiz wheel to answer questions such as “what movie was recently set in Singapore?” (hint, it was “Crazy Rich Asians”).

“I think it’s great,” Nurasyikin Azman, information first secretary at the Singaporean Embassy, said of Winternational. “It’s an opportunity for different embassies to showcase their countries and we love to be able to showcase Singapore and our great relationship with the United States. I think people are learning a lot about Singapore and the wheel gives them the chance to win a little prize.”

Many embassies highlighted items that had personal resonance. The Embassy of St. Kitts and Nevis featured a line of all-natural skin care products by Yaphene, a mother-daughter health and wellness company created in 2004 that uses fresh, natural, indigenous Caribbean ingredients from the land and sea.

At age 12, the founder was diagnosed with cancer and radically changed her diet, helping her become cancer-free and develop the idea for her company.

Thelma Phillip-Browne, ambassador of St. Kitts and Nevis, said the skin care line is an “inspirational” business — one that she’s proud to introduce Americans to. “It’s fabulous. It’s gratifying to be able to display our talent, our culture,” she said, noting that many women in her twin-island nation work in agro-processing, another fact that many Americans might not be aware of.

Likewise, the Embassy of Paraguay spotlighted bracelets handcrafted by women, along with Paraguayan chocolate and tea. This year marked the first time that the embassy participated in Winternational.

Diplomats said events such as Winternational are especially important given the current partisan political climate in the U.S. and concerns that America seems to be turning inward.

Gelfuso noted that Winternational took place just after politicians of all stripes came together for the funeral of former President George H.W. Bush. It was an important reminder of the importance of putting aside differences and focusing on collaboration and dialogue, he said.

On that note, many prominent officials from the federal and local government were in attendance, including U.S. Protocol Chief Sean Lawler, Assistant Secretary of the Bureau of Education and Cultural Affairs Marie Royce and D.C. Secretary Lauren Vaughan, who offered their support for Winternational at a private VIP reception for ambassadors and diplomats.

Vaughan agreed. “This is a tremendous event and I am so pleased to see how much it has grown over the years,” she said. “To my knowledge, this is the largest global marketplace in the country, if not in the world.”

“We’re thrilled that U.S. Protocol Chief Sean Lawler, the day after President George H.W. Bush’s funeral, saw this as an important enough initiative to dedicate his time to participate in it,” Gelfuso told us. “It is rewarding to see how the city has embraced this day and that the mayor’s office proclaimed Dec. 6, 2018, as Winternational Day.”

“I really do feel that unique relationships are formed in this room,” he added. “We had a private ambassadors’ circle reception upstairs. A lot of them have met each other, but this gives them a chance to promote a little bit — to promote their culture, their traditions and their tourism, for example, and for them to connect with the public to try to attract foreign direct investment or promote their industries. So I think we’re doing just the right thing to help bring the countries together here in our own small way.”