We’re used to sensory overload, both in our contemporary life and our contemporary art. What about sensory overlap? Some artists assault the senses with their work, looking to bludgeon a blunt impression out of their viewers. But the artistic husband-and-wife team of Michael B. Platt and Carol A. Beane seems more interested in sensory overlap, layering images to coax out multidimensional emotions.

Their exhibition “Influences and Connections” at the American University Museum features works that superimpose elements of the past onto the present. While Platt’s photographic essays engage the eyes, Beane’s accompanying poetry conjures images of its own.

Platt and Beane’s works draw on their continued inspiration from time spent in Australia between 2012 and 2014. The pair was impressed by the aboriginal inhabitants of the country and looked to document their role in its history and in their efforts to sustain their traditions. In Platt and Beane’s words, depicting these indigenous peoples resulted in a duel focus on past and present, combining “past histories — stories previously unknown or untold,” with “matters of the present — a sense of acknowledgement of Australia’s first peoples,” they write.

In many of Platt’s images, aboriginal figures hover like ghosts in the landscape, both as echoes of the past and embodiments of the present. “The Day They Came in Flying Canoes” (2014) shows a woman in modern dress against a rugged outback vista, pointing out of the frame, while the right foreground shows a nude aboriginal woman, her body’s colors blending into the background.

In another work, “I Will Always Be Here Before You” (2014), repeated images of the same woman, arranged in a rough semicircle — approximating the type of motion seen in an Eadweard Muybridge photograph or perhaps in some kind of ritual — convey a sense of the native resilience that endures in today’s Australian outback. Pratt’s depictions are thus primordial and spiritual yet very much anchored in the here and now.

In a note on Platt in the exhibition catalogue, artist Tim Davis highlights Platt’s efforts to “engage the viewer through his fusion of digital and conventional photography, drawing and printmaking,” to create collage-like works that present an alternate reality or memory. Platt’s figures don’t obey the laws of the physical world. His colors, rather than replicating the hues of the natural world, seem designed to conjure a haunting, dreamlike spin on reality.

In “Five Canoes,” a work in pigment on paper, the canoes float midair over the work’s central figure, a woman hunched in a pose that suggests intense reflection. The landscape in which she is immersed, while naturalistic, is washed out, as if drained of life. The piece incorporates Beane’s poetry, which describes scars of the past as an ever-present if unseen force in people’s lives. Beane’s poetry is also showcased separately in the exhibition catalogue, grounding the visual works in themes of remembrance that prompt viewers to create their own mental imagery alongside Platt’s visual renderings.

One risk of Platt’s approach is distancing his indigenous subjects from any tie to the present day — making them into literal museum artifacts of the past. But two factors prevent that from happening. One, Platt’s color palette is both bold and stubbornly hopeful — clear, brilliantly blue skies, for example, are more common than darker tones. Second, his figures are uniformly upright and stoic. They claim their place in the narratives with a silent dignity that carries little self-pity. They are simply present.

Davis writes that Platt’s figures “exist in spaces that are discarded — a bare forest, a drained fountain, a crumbling room,” and yet the locations don’t carry the maudlin feeling of ruins. What is conveyed is the lasting power of the contributions of these people to their surroundings, contributions that refuse to be erased. 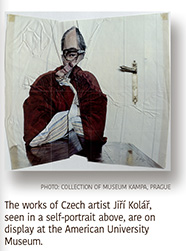 In addition to touting Platt’s history as a technical “trailblazer,” Davis highlights his lifelong connection to the Washington, D.C., arts community. Platt has taught at Northern Virginia Community College and Howard University, and “he has opened his home and studio to so many artists who need/want mentoring, guidance, or a safe place to share ideas and grow as young creators,” Davis writes. “This commitment to stories of the past and storytellers of the future comes through in his work, which stares down harsh realities, but does so on hopeful terms.”

Also on view at the American University Museum are works by Jiří Kolář (1914-2002), a Czech poet and artist who similarly incorporates both word and imagery and who also explores the lost stories of people on the fringes of society.

During the communist regime in Czechoslovakia, Kolář was sentenced to prison for critiquing the system in his poetry. Later, he focused exclusively on visual art, particularly various experimental forms of collage, although most of his mixed-media works continued to examine the word-image relationship in what can be described as “visual poetry.”

Kolář was among the prominent intellectuals who signed Charter 77, a petition demanding basic human rights in Czechoslovakia. As a result, he was forced to emigrate, living in Paris until he was able to return to his homeland after the fall of communism.

Kolář’s verbal collages are powerful not only for their resonance as protest art, but also as striking creations in and of themselves, with images ranging from the Mona Lisa to the human body — all dissected and presented in jarring juxtapositions and layered montages.

Kolář’s verbal collages, in the words of an exhibit summary, remind viewers of “the contingencies of meanings — how they are created, displaced, and lost over time.”

Michael B. Platt + Carol A. Beane: Influences and Connections

Mike Crowley is a contributing writer for The Washington Diplomat.