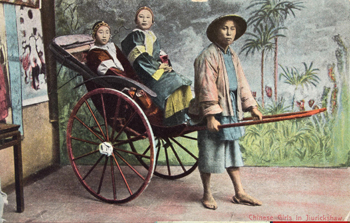 A variety of journeys across Asia — and across time — are depicted in “The Traveler’s Eye,” including works such as the postcard “Chinese Girls in Jinrikisha.”

For many people, travel becomes most meaningful when we are able to capture the experience — through postcards, photos or a blog — to remember it later and share it with others. But the urge to document and memorialize our travels is not just a modern phenomenon. As a major exhibit currently on view at the Arthur M. Sackler Gallery makes clear, travel has long been a theme in art, just as art has frequently served as a medium for recording travel.

A collaborative effort among seven curators, “The Traveler’s Eye: Scenes of Asia” explores representations of travel at different times and places in Asia throughout the last five centuries. The diverse works range from 16th- and 17th-century Chinese and Japanese scrolls depicting traveling merchants, to vintage postcards of the Middle East and Asia, to photographs of people taking everyday modes of transport in late-20th-century India. In all, more than 100 pieces chronicle different travels across the continent, from tourist trips to trade expeditions to pilgrimages.

It’s a lot to take in, but the beauty of such an eclectic array of works is that visitors can approach the exhibit as a personal journey, from which everyone will take away something different. 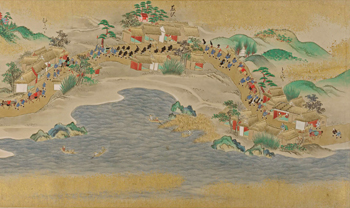 “Stations along the Tokaido”

“The works are about place, and cultural attitudes toward travel,” and the different sections are meant to highlight contrasting approaches, explains organizing curator Debra Diamond. For example, she notes that in the Chinese works, “it’s all about the process of travel and the experience of travel, and you never see their starting point or their ending point. And then in the Japanese works, it’s all about the destinations.”

The exhibit opens with a pair of multi-panel folding screens, painted in Japan in the 17th century, that show the “southern barbarians,” i.e., Western travelers — in this case traders and missionaries from Spain and Portugal arriving by ship in Japan roughly a century earlier. The details the (unknown) artists chose to include — the Christian crosses on the ship’s pennants, the almost cartoonish poufy clothing worn by both men and women, the monks with their rosary beads, the three little dogs on leashes — demonstrate the undeniable foreignness of these visitors in Japanese eyes. 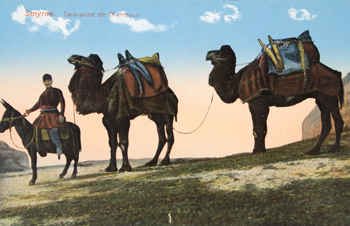 Yet although many viewers are likely to interpret the screens as focusing on the East-West cultural encounter taking place, the exhibit text explains that the scene also follows the Japanese artistic tradition of portraying ships, and it may therefore have primarily conveyed a symbolic message of wealth and prosperity in the era in which it was created.

A later gallery features an exquisite, intricately illustrated Edo period scroll, along with woodblock prints by the artists Hiroshige and Hokusai, illustrating well-known waypoints along the famous Tokaido road that connected Kyoto and Edo. Because access to this route was restricted to merchants, samurai and other officially recognized travelers, mass-produced prints of the destinations along it became popular aspirational media among the middle class, much like travel shows and blogs are today.

These pieces are juxtaposed with a colorful series of images by Indian photographer Raghubir Singh (1942-99), who spent decades traversing the subcontinent, particularly the areas along the Ganges waterway. Here, travel appears not as some rarified pursuit but as an aspect of daily life: There’s an arresting immediacy, for example, in a shot taken in West Bengal, circa 1988, of a dirt road plied by trucks, motorcyclists, bicyclists and people on foot — all framed in the rectangle of an automobile’s rearview mirror.

It’s in the last gallery that the idea of recording travel feels most intimate and personal. A wall of postcards from the “golden age” of that medium (late 1800s to early 1900s) includes vintage panoramas of familiar tourist attractions like Istanbul’s Hagia Sophia, the Taj Mahal and the Pyramids at Giza, coupled with classic Orientalist and colonialist images of Middle Eastern harem ladies, Indian holy men and Chinese riding in wheelbarrows. 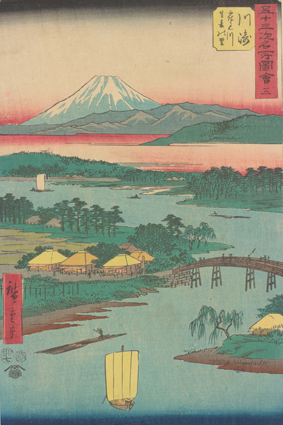 “Kawasaki station, from Fifty-three Stations Along the Tokaido (Tokaido Gojusan-tsugi)” by Utagawa Hiroshige

But it’s the way some of these postcards have been transformed into multilayered documents tracing geographic trajectories and moments in time that makes them tangible. There are stamps from around the world, postal cancellations with place names and dates, messages written in different languages, even a child’s crayon scribbling — each layer revealing something about the path taken by the postcard itself.

In the same room is a section on Charles Lang Freer — railroad magnate, museum founder and frequent Asia traveler — and his final trip to China in 1910. Alongside Freer’s notebooks, black-and-white photos taken at Longmen Gorge and personally annotated Chinese-language map is an unlikely sight: 11 eye-catching rocks that the collector brought back from the Middle Kingdom and outfitted with custom-built wooden stands.

“Here’s this Detroit captain of industry and hard-nosed collector of all kinds of magnificent masterpieces of Asian art, going along a river [in China], picking up rocks and sticking them in his pocket,” said curator David Hogge. “And he used them all his life as paperweights.”

In the end, it seems, for everyone from merchant to mogul to modern-day backpacker taking photos on Instagram, travel is about what you take away from it.

The Traveler’s Eye: Scenes of Asia