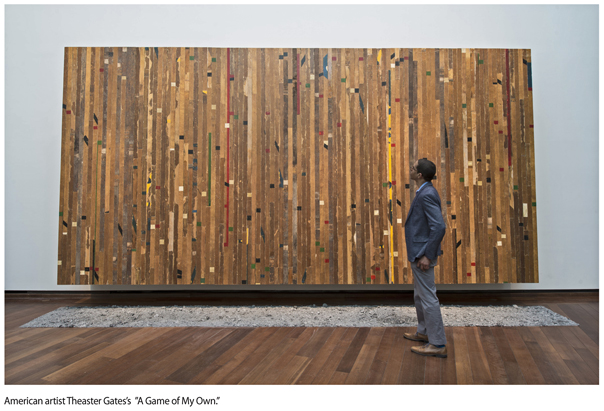 In a sky-lit tower at the National Gallery of Art, the salvaged floor boards of an abandoned high school gym have been reordered into a seemingly random jigsaw puzzle, punctuated by squares of color from scrambled floor markings that no longer provide a sense of order for the rules of the game.

Titled “A Game of My Own,” the work by 43-year-old black artist Theaster Gates uses humble, discarded materials that still possess their own power, radiating the subtle warmth of well-worn wood battered for decades beneath the pounding of children’s feet. The flooring is suspended above a fine white dusting of Alabama ball clay, grounding the demolished school’s truncated history to the earth beneath it.

In his first solo exhibition in Washington, D.C., “The Minor Arts” offers a compact vision of Gates’s work through nine pieces that explore the fraying fabric of urban institutions and the lost art of craftsmanship.

Gates lives in Chicago where he was born and raised, resisting the art world’s gravitational pull toward New York. His work is rooted in that Midwestern city’s bare-knuckled history of hard work. As poet Carl Sandburg wrote a century ago, Chicago is “proud to be Hog Butcher, Tool Maker, Stacker of Wheat, Player with Railroads, and Freight Handler to the Nation.” But blacks found a life steeped in racial discrimination as Chicago more than doubled in size during the Great Migration that brought thousands of African Americans north to escape oppression in the South, only to find their lot cast in menial jobs as meat packers, porters and domestic servants. But those dim prospects eventually expanded to the skilled trades of craftsmen who shaped the built environment around them through the humble but enduring work of the carpenter, the roofer and the stonemason. 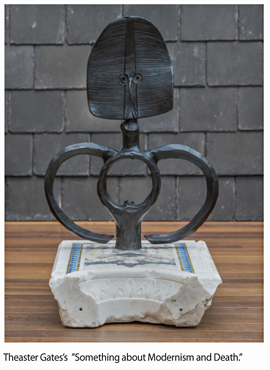 Stretching almost 50 feet across the back wall of the gallery, the reassembled slate roof of a demolished church dwarfs the viewer as it rises 20 feet on a slight pitch toward the ceiling in an installation titled “Slate Corridor for Possibility of Speaking in Tongues and Depositing Ghetto Reliquary.” The finely ordered grid of worn slate shingles becomes both an imposing barrier and a shrine to the enduring legacy of religion in the black community that is tinged with grief for the urban decay that led to this church’s ruin. Gates’s father was a roofer, and Gates would join him on roofing jobs across Chicago, elevating a black boy above the city streets while learning the skills of an underappreciated trade.

In another installation, Gates used almost 13,000 back issues of Ebony magazine dating from the 1960s that he had bound into tomes arranged by decade. The tall stacks of books fill a narrow wooden temple chronicling black popular culture that signaled the rise of the black middle class. Lit by a bare light bulb, the tower’s floor is a chunk of ornately decorated marble like that of a classical Greek palace. The installation’s title, “New Egypt Sanctuary of the Holy Word and Image,” may reference the historical debate over whether ancient Egyptian society was comprised mainly of black Africans who directly contributed to the flowering of civilization that is often solely attributed to ancient Greece.

Gates also juxtaposes traditional African and Western artistic traditions in “Something About Modernism and Death,” a small bronze sculpture of a human figure with a circular body and shovel-shaped head mounted on another block of polished marble. The dismissive view of African art as a primitive art form is flipped, with the African-themed sculpture rising above the lauded remains of Greek civilization.

Gates has taken his passion for cultural preservation outside the studio to engage directly in Chicago neighborhoods through the Rebuild Foundation. The nonprofit organization that he founded provides free arts programming and develops affordable housing and studio space in neglected communities. “Our work is informed by three core values: black people matter, black spaces matter, and black things matter,” the foundation’s website states.

The National Gallery exhibition includes a second much smaller room with two paintings covered in thick black roofer’s tar that casts a glossy sheen over stretched Naugahyde. “Sun Screen” and “Flat Bush” are nearly identical except for the jagged splintered hole in “Flat Bush” that was formed when Gates slammed an ax into it at the start of the exhibition. Gates said he was conveying respect for the skill involved in wielding an ax, but it feels like a typical performance art stunt when viewed after the fact. With its dim lighting and claustrophobic interior, the room is essentially a wide hallway where the work feels disjointed from the rest of the exhibition. 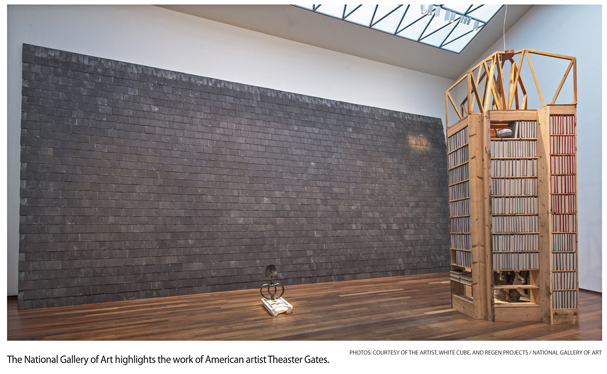 Gates preserves fragments of our past that have been razed in our relentless pursuit of progress and celebrates the “minor arts” as he calls them, the unheralded skills of tradesmen who built the physical world around us from the ground up, rising from the battered gym floor to the weathered slate roof.

“I do feel like I’m advocating for the value of hidden labor and working-class culture specifically — really the value of unseen people, unseen people who do the work in basements and the work in backyards and the work on roofs,” Gates said in a conversation with exhibition curator Sarah Newman. “Really nobody ever wants to see them, and if more of those people were the ones with the opportunity to make the thing we call contemporary art, I actually think things might be a lot more interesting.”

through Sept. 4
National Gallery of Art East Building
on the National Mall between 3rd and 9th Streets at Constitution Avenue, NW
(202) 737-4215 | www.nga.gov