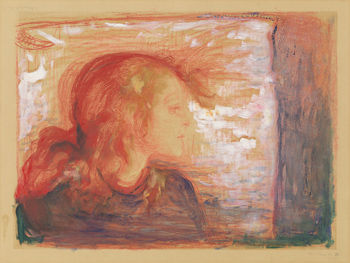 In the politically charged atmosphere ahead this fall’s congressional elections, perhaps there was no better time than now to hold a big exhibition on Norwegian artist Edvard Munch, the master of capturing human emotion, especially angst, anxiety, alienation and the universal frustration that Washington in particular seems to revel in. There’s also some sickness, sin and — yes — love thrown in for good measure.

“Edvard Munch: Master Prints” examines the Norwegian artist’s creative process by highlighting variations throughout his prints, such as two versions of “The Sick Child.”

The National Gallery of Art has put up the hefty 60-piece exhibition “Edvard Munch: Master Prints” that runs right up until the end of October (perhaps to coincide with Halloween or maybe just the November elections). As its title indicates, the focuses on Munch’s considerable gifts for printmaking in all its facets — and in so doing reveals much about the artist’s meticulous, restless working and reworking of particular images and themes over time. It’s a process show on the one hand, while on the other it also satisfies the millions of people familiar with Munch only through the popularity of his most notable pieces, and one in particular whose pop cultural status is right up there with the “Mona Lisa” and Santa Claus.

We’re talking of course about Munch’s iconic “The Scream” (which, the National Gallery tells us, he originally called “Anxiety”). It’s the famed expressionist painting so fraught with emotion — fear, stress, worry, inexplicable loss, tension, depression, alienation and isolation — that it’s become a pictorial cliché for the price of being human.

These days, angst is certainly a staple of our pop culture. Zombies and vampires continue to entice us, from Béla Lugosi’s classic depiction to the new-age celibate vampire love in the “Twilight” books and films.

But Munch’s vampire paintings evoke a haunting spirit that stabs through pop culture’s superficiality. It’s the same spirit we see in the artist’s eerie depictions of a lonely crowd, sickness, the death of children, love unrequited and tortured, and a most un-chaste reworking of the Madonna that caused a scandal.

Munch (1863-1944) was no stranger to scandal — criticized early on by polite society — or sadness for that matter. “Personal events such as the deaths of his mother and sister, which occurred when he was a child, his own close brush with death at age 13, and his intense love affairs had a profound effect on his work,” according to the National Gallery. “Munch translated many of his psychological experiences into visually condensed but potent and popular images, such as the delicate head of his sister seen in profile against the pillow of her deathbed in ‘The Sick Child.'”

Munch’s life — he died at 80 in Norway of pneumonia in 1944 as the Nazis began to pack up and leave toward Gotterdammerung — was grist for his art, and he said as much. Tense, melancholy, short-fused, emotional, prone to both anger and fits of depression, and probably manic-depression, Munch tangled with love but never found it; he suffered the loss of family members and witnessed the ravages of both World Wars. In short, he had all the ailments of a European artist at the time — a wan unhealthiness, unfulfilled heart, a certain pensive morbidity and an interest in the forbidden, all of which found their way into his paintings.

This exhibition though doesn’t delve into the personal or the psychological. Rather, it’s about the process that reveals the artist working out his obsessions, demonstrating how Munch changed a particular image over time in terms of color, line, texture and pictorial detail. None of this careful analysis though means that works such as “The Kiss,” “Vampire,” “The Sick Child,” “The Scream” or “Madonna” lose their hypnotic force. 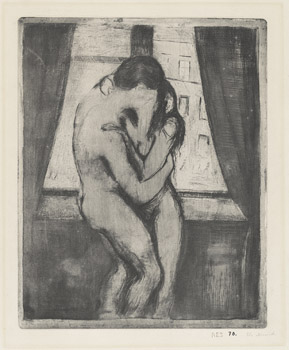 How could they after all? The overwhelming power of “The Scream” to convey that universal fear of being crushed, of being done in by the world around you, translates to every human being at every point in time.

Munch’s own life precipitated the famous painting. He wrote that “for several years I was almost mad…. I was stretched to the limit — nature was screaming in my blood…. After that I gave up hope ever of being able to love again.”

But live he did, even after a history of loss, brawling, public notoriety and the public’s initial refusal to understand his work. Germans, sometimes a morbid lot themselves, were one of the first to appreciate his art, but not the Nazis, who listed him among the degenerate artists.

Today though, the degenerate has been regenerated. In an atmosphere of unrest — from economics, to politics, to the environment, to rude, explosive pop culture — it may be Munch’s time again. Certainly, it’s a good time as any for “The Scream.”

“Edvard Munch: Master Prints” runs through Oct. 31 at the National Gallery of Art, located on the National Mall between 3rd and 9th Streets at Constitution Avenue, NW. For more information, please call (202) 737-4215 or visit www.nga.gov.