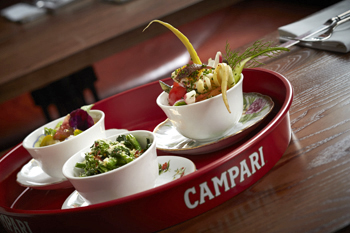 Since returning from New York a few years ago, chef Fabio Trabocchi has been busy doing his part to reestablish the preeminence of Italian cuisine in the D.C. restaurant world, reviving a star that had dimmed with the closing of Galileo and Teatro Goldoni.

His first solo venture, Fiola, which opened in 2011, has garnered numerous accolades and awards. Though less formal than Maestro, the upscale Tysons Corner restaurant that Trabocchi helmed when he earned a James Beard Award for best Mid-Atlantic chef, Fiola has entered the galaxy of its estimable predecessors. It has matured out of its original trattoria conception into an elegant destination, perfect for celebrating a special event. Fiola’s evolution left empty the niche for a simple, less expensive concept that could fill everyday dining needs (although “everyday” does not imply mundane, something Trabocchi’s food can never be accused of being).

To fill the void, Trabocchi opened Casa Luca in the space on New York Avenue left vacant by the premature closing of Againn gastropub. A victim of a neighborhood in transition, Againn was caught between its desire to be a casual eatery while also attracting high-end diners with touches like private scotch lockers. Ultimately, the idea proved unworkable. In opening Casa Luca, Trabocchi avoided the pitfalls of that contradictory approach by rejecting the pretensions that weighted down its predecessor. His formula for the restaurant is based on the Italian osteria, a casual establishment centered around wine and simple food, the kind of restaurant you can bring the family to for Sunday dinner. (We applaud Trabocchi and designer Peter Hapstak’s decision to reuse some of the interior finishings of Againn rather than throwing them in the dump.)

Though Trabocchi designed Casa Luca’s menu to emphasize homey dishes from the Marche region of Italy, it still bears all the hallmarks of his genius. Chef Trabocchi’s restaurants routinely earn superlatives, but what is perhaps most commendable is how he achieves consistently good results in so many different contexts. In his earlier work at Maestro, it was artistry and exotic techniques and ingredients that earned him recognition; at Fiola, it is the delicate balance of tradition and innovation with the best locally sourced ingredients; and at Casa Luca, is it simplicity and directness — food more from the heart than the brain.

Trabocchi’s culinary career began with family. Before he was 10 years old, he was helping his father prepare Sunday dinners at his home in Ancona, in the coastal area of Italy’s central eastern Marche region. Continuing the family tradition that began back in Italy, Trabocchi’s young son, after whom Casa Luca is named, now helps his father in the kitchen. Like his father, he too has showed early promise in the kitchen and is already learning to do his part in the family enterprise.

Perhaps it is this underlying essence of family that gives Casa Luca its particular appeal. It is not just the evocative old family pictures on the wall, or the design elements borrowed from the Trabocchi family home in Spain. They simply reinforce something more intangible: The dishes at Casa Luca are what an Italian family in Le Marche might be preparing at home. In fact, many of the recipes are the family’s own. The summer gazpacho (available when vine-ripened local tomatoes and cucumbers are at their peak) is co-owner Maria Trabocchi’s mother’s recipe. The exceptional pork chops — marinated for a day in orange juice, garlic, rosemary and lemon, then grilled and paired with sausages — is a creation of Giuseppe Trabocchi, the chef’s father. 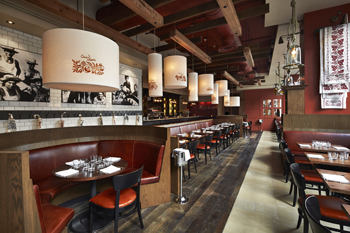 The emphasis on family carries through to the staff. Trabocchi has a genius for recognizing, encouraging and retaining talent. He has developed his own family of sorts with bright young professionals who worked with him at Maestro and followed him to New York to open Fiamma. When he opened Fiola, he brought on members of his Fiamma team who are now spread out across his three D.C. restaurants in senior spots.

Another notable aspect about Trabocchi’s three restaurants — in addition to Fiola, he opened the seafood-inspired Fiola Mare around the same time as Casa Luca — is how quickly they come up to full speed after debuting. The fact that his team has been working together for so long probably accounts for this feat.

Trabocchi tapped Erin Clarke to serve as Casa Luca’s chef de cuisine. Classically trained in French cooking, she entered the world of Italian cuisine at Maestro and served in various positions with Trabocchi before her appointment at Casa Luca. The two work well together, and we have not seen any of the false notes that sometimes arise from differing cooking visions.

Casa Luca’s menu is structured to give guests the greatest flexibility with their meals. It offers small bites, salads, cheeses and cured meats, pastas, meat and fish entrées, sides, specials and large dishes to share family style. While each category has only a few options, the total menu offers great variety. And because it is based on available fresh ingredients, Casa Luca’s menu changes frequently, with favorites disappearing and reappearing.

There is something almost magical about the way Trabocchi and Clarke’s kitchen transforms common ingredients into creations that often border on the sublime. This is particularly true with the pasta dishes. The Ravioli San Leo, for example, is simply pasta stuffed with ricotta and wild greens, tossed in a light butter sauce and topped with toasted almonds and fresh herbs. Agnolotti of Kabocha Squash pasta, meanwhile, mixes artichokes, brown butter and Sicilian pistachios (admittedly, the rye flour in the pasta is not a common ingredient in most American kitchens). Simplest of all, the Fusilli Cacio e Pepe consists of just pasta, grated cheese, black pepper, basil and a dollop of burrata, bearing little resemblance to its culinary counterpart macaroni and cheese (which is actually more complicated to make).

Trabocchi grew up on the coast, so not surprisingly all of his restaurants offer masterful fish dishes. A favorite is the child-friendly Milanese preparation of breadcrumbs and lemon that accentuates the fish rather than covering it up. The Tonno “Briaco,” or drunken tuna, is unusual in that the fish is marinated in Madeira for many hours before cooking. Garnished with anchovy and caper and paired with a sweet turnip crema, it is a subtle dish. More robust, the oven-roasted branzino is topped with herbed breadcrumbs and cooked with roasted tomato and peppers and taggiasche olives. The menu also offers a family-style seafood option each night, such as whole grilled fish or fisherman’s polenta. 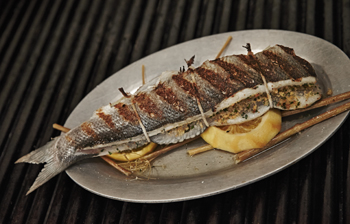 Dessert is an important component of a Casa Luca meal, and Trabocchi trusted it to another long-time team member, Tom Wellings, whom diners might remember from his work at Restaurant Eve and at Equinox. Wellings serves as the corporate pastry chef for all three Trabocchi restaurants. For the Casa Luca dessert menu, he begins with classic desserts from the Marche region and builds an interesting collection.

Choices range from simple options such as a rustic warm quince tart dressed up with almond cream and vanilla gelato, to a warm hazelnut coffee cake served with caramel gelato and a tiny jug of syrupy vin cotto. The almost decadent Piemontese Gianduia cake — a dense flourless chocolate cake layered with hazelnut chocolate mousse and accompanied by hazelnut chocolate crema — is one of those disappearing desserts: look twice and it’s gone. Wellings’s Zuppa Inglese is a family-style, elegant rendering of the traditional Italian trifle cake. Layers of sponge soaked in bright red, herbal Alchermes liqueu and intense chocolate cream are crowned with delicately toasted meringue.

An important feature of any osteria is the wine. In Italy, after all, many osterias are located in the heart of wine-producing regions. Casa Luca, in fact, is the only place in the city with wines on tap. In addition, it offers a selection of reasonably priced Italian varieties as well as a larger list of international labels. The beverage list also features interesting house cocktails built with classic Italian ingredients. Most are intense and not too sweet, with the exception of the Prima Donna, a heavenly fruity cocktail topped with cloud-like whipped egg whites.

Service at Casa Luca is excellent. Front of the house staff are efficient and the timing is almost flawless. Wait staff have substantial knowledge about the food and are happy to engage in conversation about it, without being inappropriately or off-puttingly familiar.

It is interesting to watch the work of professionals when a mistake does happen (and they inevitably do, no matter how well a restaurant is run), as it reveals a lot about the management. On a recent visit, one of our drinks was delivered to the table next door. The guest looked surprised but pleased, assuming it was a gift from the house. Without missing a beat, the waiter asked how she had liked the drink. Realizing the drink had not arrived at our table, he apologized, explained what had happened without excuses (out of earshot of the other table) and brought another quickly. The whole transaction was accomplished with no fuss or muss in the well-paced flow of either table’s meal. It was an impressive handling of what could have been an awkward situation by less able staff.

As the city settles into winter, fantasies of leisurely meals in front of cozy fireplaces at rustic family-run inns in the Italian countryside make for pleasant diversions. While Casa Luca cannot transport you to far-off olive groves and vineyards, it can take your taste buds on a culinary adventure to Le Marche while it surrounds you with the warmth and comfort of a family meal — prepared by a chef who has become one of Washington’s own adopted sons.