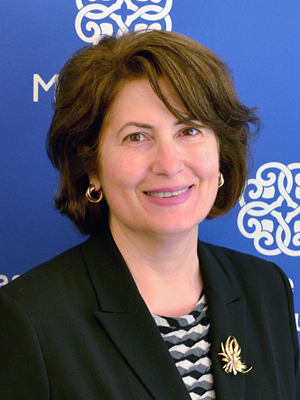 In recent months, international diplomacy took center stage as high-level negotiators from Iran engaged with officials from the United States and five other nations regarding Tehran’s controversial nuclear program.

The protracted, complex talks — conducted by official statesmen at the highest levels of government — eventually yielded a historic agreement that eases sanctions on Iran and, at least ostensibly, bars the Middle Eastern power from building a nuclear bomb for the next 15 years. But diplomatic breakthroughs don’t always emerge from such formal government-to-government discussions. Look no further than the perennially stalled Israeli-Palestinian peace process for proof of that. Sometimes, the foundation for diplomatic success is laid behind the scenes in a widely used, but less familiar, process called Track II diplomacy. Track II refers to unofficial interactions usually carried out by nongovernmental actors with access to decision-makers.

Few Washington foreign policy experts are as experienced in the art of Track II diplomacy as Randa Slim, director of the Track II Dialogues initiative at the Middle East Institute and an adjunct research fellow at the New America Foundation. Slim has been a senior program advisor at the Rockefeller Brothers Fund, a guest scholar at the U.S. Institute of Peace and a program officer at the Kettering Foundation. A long-time practitioner of Track II dialogue and peace-building processes in the Middle East and Central Asia, in 2007 she co-founded the Arab Network for the Study of Democracy, a group of academics and civil society activists from eight Arab countries.

Slim, who hails from Lebanon, is also a widely quoted and sought-after expert on Syria. She has been deeply engaged in a Track II (she describes it as “Track 1.5”) dialogue on the conflict in that war-torn nation since 2013. We talked to her about Track II diplomacy, Syria and other subjects.

The Washington Diplomat: Track II diplomacy got its start during the Cold War, as free-thinking Soviet and U.S. citizens such as academics, think tank-types and others met informally to discuss their nations’ vast differences. It has since evolved to a much more formal process. How do you describe Track II diplomacy to those unfamiliar with the term?

Randa Slim: We have to start rethinking diplomacy as a multitrack process which has a number of entry points and a number of actors. Track I is what everybody knows, which is government-to-government negotiating, signing treaties, making agreements. But you have a lot of work that needs to be done pre-negotiation, or complementary or corollary to the negotiation, and that is Track II. It doesn’t even need to involve people in government. But there is also now also something called Track 1.5 — a mixture of officials and non-officials sitting together and talking about conflict issues like Syria or Yemen, and conflict resolution approaches.

You want to create a space where you can test new ideas and brainstorm new ideas.

TWD: Which process is underway with respect to Syria?

Slim: The one I am doing on Syria is Track 1.5 because it involves people who are in government right now, former senior officials who still have access to decision-makers and outside experts. It is called the Middle East Dialogue and it has been going on since 2013 and it brings people together from the region. The primary actors are regional actors. You have the Turks, the Iranians, the Saudis, the Emiratis, the Egyptians, the Jordanians, the Iraqis and the Lebanese. We also have Americans, Russians, Europeans and Chinese sitting in.

TWD: What are you hoping to accomplish in the Middle East Dialogue — this so-called “Track 1.5” diplomacy on Syria?

Slim: It was designed to map the historical transformation the region is going through. We felt like we needed a space where people in-the-know, people who have been through other transformations in other parts of the world … sit together with experts and try to make sense of what is going on. When you design a dialogue process, you don’t just say you’re going to come and talk about everything. Our entry point was Syria. We knew that Syria was going to be a fault line in the re-emerging culture…. [H]ow the conflict in Syria and Iraq is eventually settled will determine the character of the Levant and the region that is going to emerge years down the line.

TWD: But what are you discussing with respect to Syria and the ongoing civil war there?

TWD: Who pays for the effort? Is there any U.S. government involvement?

TWD: Are these talks private or do you share them publicly?

Slim: We have public memos that we usually post on our website. I am of the idea that … you need these ideas to be infiltrating everywhere, in as many spaces as possible. Now, with the web, you have the ability to inject ideas through social media, op-eds etc., and usually we have ideas generated in this dialogue that are featured in these op-eds.

TWD: Since current government officials aren’t used in Track II diplomacy, how is your work perceived by them?

Slim: Now there is understanding and appreciation within the official structures, in this country, but also I’m seeing it more and more in other countries — in Europe and in the Arab world. In the past, Track II used to be talked about as unnecessary background noise. Now we have officials seeking us out. They want a report. You have this receptivity partly because I think there is more and more appreciation inside government, and especially (the U.S.) government, that international relations is about relationships between body politics. 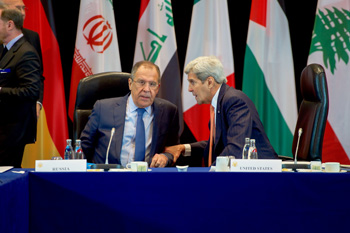 U.S. Secretary of State John Kerry, right, talks with Russian Foreign Minister Sergey Lavrov on Feb. 11, 2016, at the Hilton Hotel in Munich, Germany, before a meeting of the International Syria Support Group.

Career civil servants understand diplomacy is not just about governments meeting and signing treaties. It is about relationships between people. This whole field of Track II has become much more professionalized. You have now a number of individuals and entities who have been involved in this business for some time. There is a skill set and a code of conduct.

TWD: What do Track II participants contribute that governments cannot?

Slim: We do not have budgets and armies that are rooted in power; only governments have access to that. What we have is networks, personal connections, relationships and intellectual and social capital.

TWD: Let’s talk about Syria. This is an area of your expertise and, as you said, it’s an issue your Track II diplomacy efforts have been dealing with. What is your opinion of the Obama administration’s approach to this crisis?

Slim: They look at Syria only through the ISIS (Islamic State) prism. ISIS is there because it tapped frustrations that were created by a regime (Syrian President Bashar al-Assad’s) and a government that has for more than 40 years denied its citizens basic rights of freedom, dignity and representation. You can degrade ISIS and eliminate ISIS, but as long as the regime is there with its current structure incapable and unwilling to fight ISIS, there there will (always) be ISIS.

The other part of the Syria problem I have (with respect to U.S. policy) is it’s always Iraq first. This Iraq-first approach doesn’t make sense. You cannot eliminate ISIS in Iraq as long as ISIS has a place in Raqqa…. ISIS has to be looked at as a regional situation now. It’s not a country problem. We are looking at it through a counter-terrorism lens and are missing the precedent causes of ISIS. It is not Shias and Sunnis. We always had in our history the ebb and flow of Shia and Sunni tension. It has always been there. Political leaders are using it to divide … for political gains. ISIS is a political problem reflective of a political disease and that political disease is this regime (Assad’s). Unless we remove this regime, that disease will metastasize in the future into worse kinds of cancer, worse kinds of ISIS.

TWD: Obviously, the Obama administration wants Assad out. It has repeatedly insisted that Assad has to go.

Slim: But it’s not obvious. They talk the talk, but their walk is contrary to the talk. There is a total mismatch between the walk and the talk.

TWD: What could the Obama administration have done differently?

Slim: 2013 was the opportunity to basically ground the Syrian Air Force. That was the minimum that should have been done — deny that airpower. Now our options are very constrained. It’s over. I give up on this administration.

TWD: Now the Russians have been bombing rebels in Syria, strengthening Assad’s hand.

TWD: And what do you suggest the U.S. government do?

Slim: I think what we can do is create a no-fly zone. We can work with the Saudis and the Turks at least on the no-fly zone and I think say to Russia either there is a ceasefire or we have to create this no-fly zone where we put these refugees. We have how many refugees from Aleppo that are sitting on the border with Turkey? At some point Turkey is going to say enough is enough.

TWD: Do you envision a scenario in which Assad gives up power and maybe takes asylum somewhere, as has been proposed by some international experts in the past?

Slim: Why would he leave now? Put yourself in his position. His forces are, thanks to the Russians and Iranians and Hezbollah and the Iraqis, regaining that (northwestern) part of Syria. But once he regains control of Aleppo and solidifies his control over the west, then he has to deal with these two entities that will be there: One is the Kurds and the other is the Islamic State. It’s going to be interesting to see if Assad is going to confront both of these or not. He wants to regain control of Aleppo because once he has Aleppo and you have Homs, Hamas and Damascus, then you control the country. He can live without that little countryside. Let ISIS deal with it.

TWD: You are obviously a big proponent of diplomacy, dialogue and talking with adversaries to try to resolve disputes. What about terrorist groups such as al-Qaeda or ISIS? Is there any sense at all in trying to initiate dialogue there?

Slim: What’s the point of talking with them? They don’t want to talk. Dialogue and talking implies respecting the other’s humanity — the other’s presence as a valid interlocutor and as a partner in human interaction. ISIS — I mean come on, come on! They have ruled themselves out of the sphere of human interactions. They are just way, way, way outside that and that is why I’m totally of the idea we have to defeat them. We have to defeat them and we have to destroy them. We cannot let them survive.