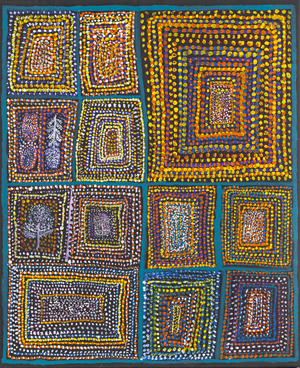 An unusual, arresting show at the Embassy of Australia speaks truth to the adage that you’re never too old to learn something new.

An indigenous Aboriginal elder named Loongkoonan took up painting in her mid-90s. Now a sprightly 105, she continues to garner critical acclaim in the art world for her beautifully hypnotic works that pay homage to her homeland.

“Not only is it saying it’s never too late, but there is a value of learning and a lifetime of knowledge in her paintings,” said Henry Skerritt, who developed and curated the exhibit. “She is saying this is who I am and this is my country; it’s sad in the West that sometimes we forget the great knowledge that comes from being an elder.”

“Yimardoowarra: artist of the river” features 24 paintings never before seen outside of Australia.

What makes this exhibition so unique is that displays of Aboriginal art tend to include examples from numerous artists and rarely focus on a single personality. This show allows visitors to “see a systematic attempt by one very important Aboriginal woman to explain something about herself, her country, culture and world,” said Skerritt, who is also an art historian and songwriter. “By painting this show, people will be able to see who she is and where she comes from, which is so important.

Loongkoonan depicts the Fitzroy River country of the Nyikina people, who hail from the central western Kimberley region of Australia. The Nyikina describe themselves as “Yimardoowarra,” which means “belonging to the river.” This symbiotic relationship with the environment is captured in Loongkoonan’s canvases, which resemble an intimate conversation with her country. 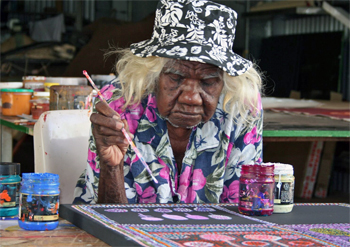 An Aboriginal elder named Loongkoonan took up painting in her mid-90s. Now a sprightly 105, she continues to garner critical acclaim in the art world for her mesmerizing works.

The paintings are composed of vibrant, shimmering dots that embody her deep understanding of her homeland, particularly food gathering and preparation techniques that have been practiced by her people for millennia. Skerritt noted that the Nyikina language and customary law are endangered, making Loongkoonan’s work even more critical to preserving this ancient culture.

“I think we all know that art plays an important role in diplomacy,” Skerritt said. “It’s part of the reason why governments all have cultural attachés.”

Skerritt added that Aboriginal art originates from people who are deeply embedded in their homeland yet in many ways disenfranchised from it. Indigenous people don’t always have the tools to convey their message to the rest of the world. Painting can be a powerful vehicle to communicate culture and raise awareness.

Indeed, Loongkoonan has enjoyed an outsize impact since entering the art world a decade ago — in the vein of Grandma Moses, a renowned American folk artist who began painting at the age of 78. 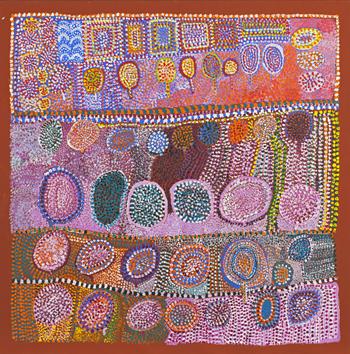 Pieces such as “Bush Tucker in Nyikina Country” evoke Aboriginal connections to the Australian landscape.

“She’s a diminutive, quiet lady but a lady that exudes extraordinary strength,” Skerritt said of Loongkoonan. “It’s a very rare combination. She is truly an extraordinary woman.”

Skerritt was inspired to develop this exhibit because of his interest in contemporary indigenous art. “I think it’s something people in the U.S. should see,” he said.

He had the opportunity to meet Loongkoonan in 2005 and followed her from the beginning of her artistic career. “In some ways, getting her paintings out to the world was me trying to repay some things I’ve learned,” he explained.

Skerritt said he hopes that Loongkoonan’s creations will offer a window into a remote, often misunderstood culture from a woman whose wisdom and life experience make her a unique messenger.

Yimardoowarra: artist of the river