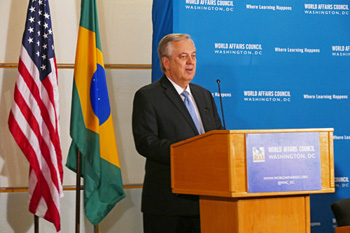 Forty years ago, a young Irishman named Tony Culley-Foster sprinted 2,986 miles across the United States — averaging 39 miles a day from San Francisco to Washington, D.C. — to promote the President’s Council for Physical Fitness and the Boys Clubs of America.

Four years later, he ran the entire 1,234-mile circumference of Ireland in 35 days in a fundraising event for the Protestant and Catholic Boy Scouts movements.

These days, Culley-Foster runs the World Affairs Council – Washington, DC, an influential nonprofit founded in 1980 that prides itself on unfettered access to the city’s diplomatic corps.

“At our annual World Affairs Honors Gala we get an average of 75 ambassadors … as part of our audience,” Culley-Foster told The Washington Diplomat during a recent interview at his ninth-floor office. “The focus on the diplomatic corps is very important to our international affairs program.”

In addition to dozens of events each year featuring ambassadors and other top-level officials, WAC-DC spearheads a variety of education programs as part of its mission to involve as many citizens as possible in an exchange of ideas, knowledge and understanding of global issues. Billing itself as the place “where learning happens,” WAC-DC employs eight staffers at its Dupont Circle headquarters. 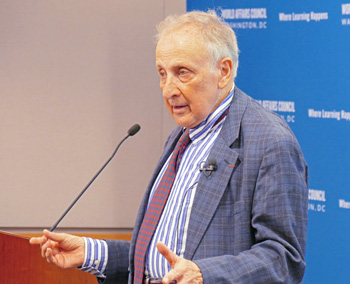 The World Affairs Council – Washington, DC hosts author series such as this September 2015 discussion with former U.S. Assistant Secretary of State for African Affairs Herman Cohen on his book “The Mind of the African Strongman: Conversations with Dictators, Statesmen, and Father Figures.”

No on else in Washington competes directly with WAC-DC, said Culley-Foster, a longtime international business consultant who was on the group’s board for seven years — part of that time as chair of the global communications committee — before being named president and CEO a year ago.

“We have a synergistic combination of three disciplines that are the pillars of this organization: global education, international affairs and global communications. We have a powerful and influential board, and we’re on a five-year, controlled growth plan to expand from primarily focusing on the Washington metro area,” he said, adding that Tata Consultancy Services Ltd. is helping WAC-DC promote itself internationally.

Culley-Foster, 68, left Ireland at the age of 19 to attend university in London, then became a senior high school teacher — joking that he “taught English to the English in England for two years” before immigrating to the United States in 1971 and launching a long career in civic and corporate management.

Unlike other think tanks, which schedule their events during the day, WAC-DC’s 50 or so programs a year usually take place at night, between 6:30 and 9 p.m., and are often nationally televised. These events generally draw at least 100 attendees; about 75 percent of them focus on global affairs, with the remainder split between global education and global communications.

Recent events included an author series with Rod Nordland on his book “The Lovers: Afghanistan’s Romeo and Juliet – the True Story of How They Defied Their Families and Escaped an Honor Killing”; a discussion with Egyptian Foreign Minister Sameh Shoukry, Cairo’s former envoy to Washington; and an embassy event at the French Residence with Ambassador Gérard Araud. Past embassy discussions have featured envoys from Australia, Pakistan, Brazil, Germany, South Africa and numerous others. 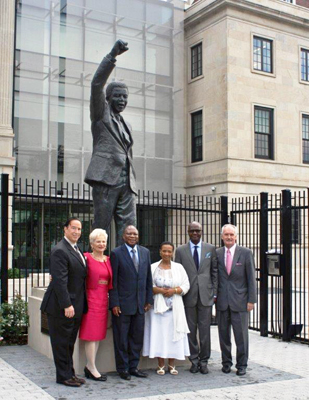 “We are educators and teachers in the knowledge transfer business,” Culley-Foster said. “We are encouraged by the number of young professionals and want to make sure the voice of millennials is heard.”

The group prides itself on attracting both up-and-coming and established voices, including big names to headline its annual gala.

On March 29, WAC-DC will host its 2016 Global Education Gala at the Ritz-Carlton in Washington, where it will present Mninwa J. Mahlangu, South Africa’s ambassador to the United States, with its Distinguished Diplomatic Service Award.

In addition, U.S. Defense Secretary Ashton Carter (winner of this year’s International Public Service Award) will give a keynote address on global education and the military.

Tickets for the extravaganza start at $500 each; last year’s gala attracted more than 900 people including world-famous basketball star Earvin “Magic” Johnson, who personally donated $200,000 of the $972,000 raised that night.

“We are determined to raise $1 million net on that evening to help us advance our strategic goals,” said Culley-Foster, assuring us that no less than 840 guests — including 75 ambassadors and 30 journalists— will converge on the event. “Magic Johnson is coming back, and an invitation has been extended to [actor] Samuel Jackson to join us.”

WAC-DC is no stranger to large events. It currently works with 75 to 100 strategic partners including the Kennedy Center, National Geographic Society, National Press Club and the White House Historical Association. Its guests are frequently think tank and foreign policy experts who attended Georgetown University’s School of Foreign Service, American University or similar institutions.

“D.C. is a town where on any given night, many influential people have multiple high-level options as to where they spend their time,” Culley-Foster said. “So if we want them to spend some of their resources with us, we’d better be batting close to a thousand. Our event attendees are multi-generational futurists, critical thinkers, intellectuals, thought leaders and educators whose common interest is global education.” 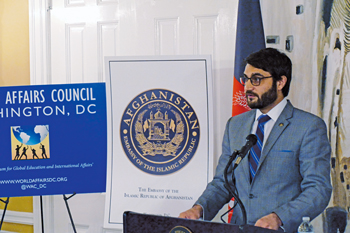 WAC-DC itself belongs to the 98-member World Affairs Councils of America (WACA), a network established in 1986 to act as a national association umbrella for the growing number of councils around the country. Today, WACA is the country’s largest nonprofit organization dedicated to fostering grassroots understanding of, and engagement in, world affairs.

As such, WAC-DC seeks to reach young people as early as possible. Its global education programs focus not only on colleges and universities, but also on high schools in the District, Maryland and Virginia, as well as undergraduate students and teachers.

For instance, the Summer Institute on International Affairs, an intensive weeklong seminar for high school educators from across the nation, provides teachers with the tools and materials with which to bring international curricula into the classroom. To date, over 1,400 U.S. and international high school educators have participated in 28 annual institutes. WAC-DC also sponsors travel-abroad study tours, internships, Academic World Quest competitions for students and workshops for teachers on topics ranging from Iraq and Syria to migration and globalization. 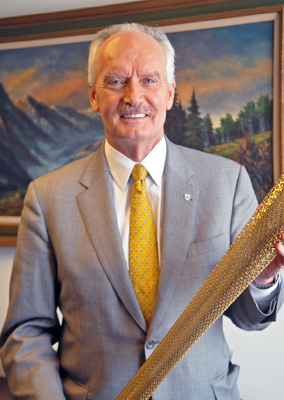 Tony Culley-Foster, who took the reins of the World Affairs Council-DC a year ago, has been involved with the Olympic Games since 1980 and represented the United States in the 2012 Olympic Torch Relay in Ireland.

“We feel there’s a knowledge gap in the curricula of the American school system, where not enough emphasis is being given to world geography, social studies, the arts and foreign languages,” Culley-Foster explained. “The issue goes much deeper than having people with language capability. We live in a diverse, multicultural and increasingly interconnected world where news is instantaneous and people want to know why the United States is being vilified in so many countries around the world.”

He added: “There’s a lot of talk that the U.S. no longer wants to be the world’s policeman. That’s positive and good, but the real issue here is global education. How the hell can policy be created if we don’t understand the cultures we’re dealing with?”

To help its members navigate world affairs, WAC-DC offers two types of events. The first is the Ambassador Series, which takes place at the Ronald Reagan Building and International Trade Center. Generally, a diplomat gives an on-the-record televised speech, followed by a 40-minute Q&A, then a reception.

“The ambassador did a superb job of giving our audience an overview of what Brazil’s goals were going to be at the COP21 meetings in Paris,” he said.

The Embassy Series, on the other hand, are off-the-record talks.

“We are a neutral, nonpartisan, independent platform where open dialogue and free speech are encouraged. We try to get those ambassadors to be as candid as possible in their Q&As. It’s a different kind of format than the other guys in town,” Culley-Foster said. 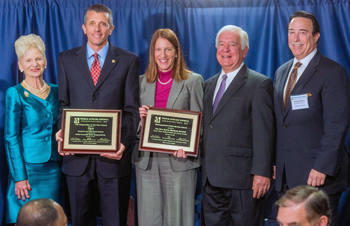 “We understand that each of them operates with different challenges and we respect them. In our Embassy Series events, very often we get ambassadors to open up in a way they would normally not, because of their sensitivity to media coverage. They also know they’ll get very good, intelligent questions from a well-informed audience.”

One such ambassador was Russia’s Sergey Kislyak, who spoke at a World Affairs Council-DC event the week Culley-Foster started there.

“We had 185 people in attendance, and much to my surprise and delight, the ambassador agreed to accept questions from a very high-powered influential audience. He answered questions for an hour and 45 minutes and did an admirable job — and given the circumstances under which he operates, he was remarkably candid.”

Since 2000, according to the organization’s website, more than 125 foreign ambassadors, 50 U.S. ambassadors, 23 U.S. cabinet secretaries and two U.S. presidents have shared their perspectives on international affairs with WAC-DC audiences. And since launching its online programs in 2007, the council says more than 350,000 people have viewed its events via the Internet, video streaming, podcasts and other media distribution channels, in addition to coverage on C-SPAN and FORA.tv.