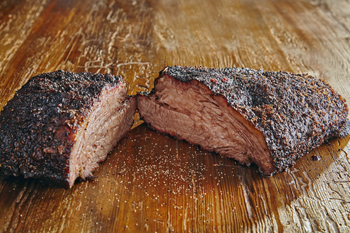 Until recently, Washingtonians who craved quality barbecue had to look to the suburbs, and most of what we found was of the international variety.

Not surprisingly, the menu at Texas Jack’s is decidedly Texan, with flourishes of the Mexican and German flavors so heavily infused in the state’s barbecue culture.

Sure, Arlington has sizzling Lebanese kebabs, Silver Spring can claim a couple of good Latin American grills and Annandale boasts several authentic Korean barbecue spots. But for a long time, it was hard — maybe not impossible, but hard — to find really good American-style ribs, brisket or pulled pork in the area. Then, five years ago, Hill Country opened in Penn Quarter. The sprawling Texas-style restaurant’s pit-smoked meats weren’t always flawless, but they did effectively channel the Lone Star state’s culinary spirit.

Hill Country’s success also seemed to spark a flame under the area’s long-moribund domestic barbecue scene. In the half-decade since its arrival, several more ambitious barbecue establishments have fired up around the nation’s capital. This month, we revisited Hill Country and tried a couple of other, newer barbecue establishments. Both of the more recently opened places we visited — Texas Jack’s and DCity Smokehouse — opened under the guidance of pit-masters who previously plied their trade at Hill Country.

Our best barbecue feast was at Texas Jack’s, which opened its doors near Clarendon in Arlington, Va., in January. We arrived on a frigid January night and took a seat in a comfortable booth near the bar. The aesthetic is a mix of rustic and modern, with Western murals and repurposed wood alongside a sleek bar and floor-to-ceiling windows looking out onto bustling Washington Boulevard. When the weather warms up, patrons can enjoy an outdoor patio. We’re betting it will be packed.

Not surprisingly, Texas Jack’s menu is decidedly Texan, with flourishes of the Mexican and German flavors so heavily infused in the state’s barbecue culture. We kicked dinner off with the amusingly named ’87 Cutlass Supreme nachos. A modest — and also at $6, modestly priced — plate of crisp, light tortilla chips arrived covered in a steaming blanket of queso flecked with fresh jalapenos. Succulent, shredded pork crowned the assembly. Being a bit of a heat freak, I anticipated needing more jalapeños but once we dug in, I realized the queso contained adequate fire and melded perfectly with the smoky pork.

We were disappointed, but not surprised, that the kitchen was out of ribs and chicken. The best new barbecue joints frequently run out of their most popular styles of meat because they prepare them fresh every day. This is a good thing. But if you can, arrive early. While our 8 p.m. seating meant no ribs or chicken, not all was lost. Texas Jack’s still had beef brisket and pork sausage, and both were dynamite. 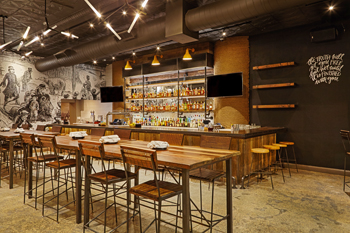 The aesthetic at Texas Jack’s is a mix of rustic and modern, with Western murals and repurposed wood alongside a sleek bar and floor-to-ceiling windows.

The beef, procured from the respected Allen Brothers line of meats in Chicago, is obviously top-quality. To the eye, the medium-thin slices appeared perfect — light brown in the center with an appealing pink just below the fat cap. It was just as pleasing on the palate, boasting a tender texture without being fatty. Hints of salt and black pepper peeked through to delicious effect. Texas Jack’s also serves a brisket sandwich on a fresh roll topped with a fried egg and a drizzle of queso. Decadent and intensely satiating, we’re told that the sandwich has quickly become a favorite of Arlington firefighters in the neighborhood.

While the brisket was tender and delicious, a pork sausage link from the Maryland purveyor MeatCrafters was even better. Infused with habanero pepper and queso blanca, or melted white cheese, the link boasted a perfectly taut casing that gave way to a silky, juicy pork flavor inside.

Meat this good doesn’t require barbecue sauce and Texas Jack’s doesn’t put any on the tables. These days, at many barbecue restaurants it seems that asking for sauce is akin to asking for A1 at a fine steakhouse. But we were curious, so our server brought us some. Texas Jack’s makes its sauce in-house and while it was a little sweet for my taste, most diners will probably enjoy it. The point is you don’t need it.

We also enjoyed several side orders at Texas Jack’s, with the esquites registering as a favorite. Pan-fried corn, a bit of mayonnaise, cotija cheese, cilantro and jalapeño combine to delicious effect. The corn, removed from the cob, was well-cooked — not too firm and not too soft — and made a nice base for the other flavors. Brussels sprouts, which have become a bit passé in today’s dining environment, got a new lease on life at Texas Jack’s. The smoky green orbs, slightly charred and tender, were punched up significantly with a drizzle of fresh lemon and lime. Meanwhile, cucumbers mixed with Greek yogurt, lime and jalapeño honey weren’t quite as flavorful as we expected. If you have room (we didn’t), don’t forget the pies made by Livin’ The Pie Life, a local pie shop. We took a slice of key lime pie home and enjoyed it the next day. 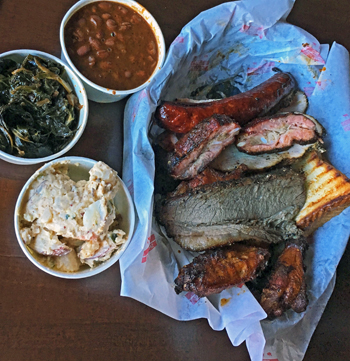 Our second barbecue adventure took us to DCity Smokehouse, which opened to great fanfare in 2013. The smokehouse, initially situated next to a liquor store on a rather grim corner of North Capitol Street and Florida Avenue in Northwest D.C., has temporarily moved into the Wicked Bloom bar a few doors down. DCity Smokehouse is expected to move to a permanent home a couple of blocks west on Florida Avenue by summer.

Our initial visit to the five-seat counter and take-out joint last year dazzled. The sliced, tender brisket sandwich served on toasted buttery bread and slathered with a creamy garlic sauce was nothing short of fantastic, and the shredded Brussels sprouts and barbecue beans were hot, filling and flavorful. Classic gangster rap pumping from the sound system contributed to the tiny spot’s gritty-yet-inviting urban vibe.

A subsequent visit six months later was less impressive, as we found our take-out brisket overly fatty and accompanied by a rather uninspired half-chicken. We chalked the disappointment up to arriving late and getting some of the last meat of the day.

For a third visit, we arrived early — mid-afternoon on a Saturday — to ensure we didn’t miss out on any fresh, meaty menu options. At the current location, you order from the bar and sit at spacious tables along the wall or by a window overlooking the action on North Capitol Street. The “showstopper” is a good deal that includes half a pound of pork ribs, six pit-smoked wings, half a pound of any meat by the slice and two small sides for $27. But it was hit or miss.

The pork ribs were excellent, if a bit small. Tender, smoked meat pulled easily from the bone but maintained a nice heft. The ends were succulent and flavorful. But the beef brisket was dry, a bit chewy and barely lukewarm. We also sampled some smoked turkey, which had a nice flavor, but it also was just about cold. The pit-smoked chicken wings, however, were sizzling hot, meaty and juicy with a slightly briny flavor.

DCity’s potato salad was also on point, with lightly dressed and smashed — but still slightly firm — potato chunks studded with crispy bits of celery and salt. The barbecue beans had a peppery, tangy flavor and came steaming hot, but some of the legumes were undercooked and overly firm, leaving a distracting effect on the palate. 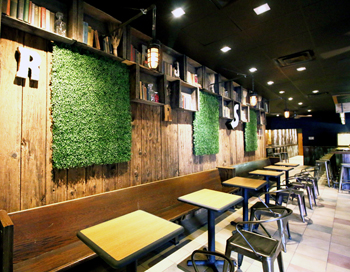 DCity Smokehouse has temporarily moved into the Wicked Bloom bar but is expected to move to a permanent home a couple of blocks west on Florida Avenue by summer.

Overall, our late lunch at DCity Smokehouse was satisfying, if not as good as it could be. We hope for better consistency when the eatery moves to a permanent home.

Finally, a few words about Hill Country, the place that got D.C.’s barbecue ball rolling. As a native Texan, I was initially skeptical of the Hill Country concept, expecting the place to be an oversized, Disney-esque version of a Texas barbecue joint. And it is just that. But Hill Country quickly grew on me, in part because it serves Shiner beer and Blue Bell ice cream from Texas and offers nightly concerts with up-and-coming, authentic country and Americana bands. Most importantly, Hill Country serves up some very good barbecue.

The place offers brisket two ways: lean or moist. Moist means more fat, and hence more flavor. I’m cholesterol conscious so I tend to go lean. But lean usually means a bit drier cut of meat. You want to make sure the lean brisket is freshly sliced as air is like kryptonite to a brisket’s moisture. I also like Hill Country’s big beef ribs, although they often run out, as they did on my most recent visit. The beef ribs come dry-rubbed and a bit salty, but the tender pink meat underneath the charred exterior is bursting with flavor. Hill Country serves pork ribs, too, but they tend to be a bit tough.

We heartily recommend Hill Country’s white cheddar macaroni and cheese, gooey in the middle and often served with a lightly browned crust on top. The collard greens served with tiny chunks of pork are tangy and filling and give the illusion of nutrition. For dessert, try some Blue Bell and enjoy the sweet, creamy goodness with the realization that “American barbecue” is no longer a disappointing phrase in this town.