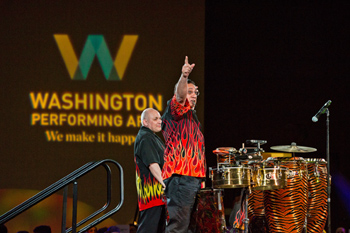 When Patrick Hayes, then 32, came to Washington in 1941 to manage the National Symphony Orchestra, the city was unquestionably a cultural backwater. He thought they’d need police to control the crowds at the box office for the first concert he promoted, featuring the legendary Russian composer Igor Stravinsky. But the auditorium was half empty and he was told, “That’s why you’re here.”

The Washington Performing Arts’s annual gala and auction features an array of concert and dance performances throughout the dinner.

Over the next 40 years, Hayes — who tried his hand as a banker, restaurant manager, actor, singer, nightclub MC and insurance salesman before becoming one of the country’s leading impresarios — would help transform the District into a city that attracted many of the world’s best musicians, dancers and entertainers. Hayes died in 1982, but the Washington Performing Arts Society, a nonprofit he founded in 1966 to help expose Washingtonians to classical, jazz, gospel, world music and dance, has never been stronger.

“Hayes’s vision to present a window on the world still has a lot of resonance for us,” said Jenny Bilfield, president and CEO of what is now simply called Washington Performing Arts (WPA). “We’ve stayed true to that balance of global versus local.”

Over the last half century, WPA has welcomed scores of well-known international orchestras and big-name performers — Luciano Pavarotti, the Bolshoi Ballet, Louis Armstrong, Joshua Bell and Yo-Yo Ma to name just a few. But they also expose local audiences to global stars with whom they may not be familiar. For example, in recent years WPA has hosted Kodo, a taiko drumming troupe from Japan; Chucho Valdés, the highly regarded Cuban pianist; the Simón Bolívar Youth Orchestra from Venezuela; and Hugh Masekela, a South African trumpeter, among many others from six continents.

WPA also booked a slew of highly regarded international orchestras this season. The Budapest Festival Orchestra played at the Kennedy Center on Feb. 15; the Montreal Symphony will perform Debussy, Prokofiev and Stravinsky’s “The Rite of Spring” there on March 14; and the Bavarian Radio Symphony Orchestra will perform Korngold and Mahler there on April 12.

Bilfield says that those who love classical music like to check out how different orchestras from around the world compare with one another.

“You wouldn’t just watch one baseball team and think you know the sport,” she said. “People in D.C. love classical music and they want to see how each orchestra is different.”

In some cases, WPA features world musicians who play instruments Americans might not be familiar with. Zakir Hussain, for example, is an Indian musician who plays the tabla, a type of drum commonly used in South Asia. Simon Shaheen, a Palestinian musician who came to D.C. last season, plays the oud, a very old instrument that is the precursor to the modern guitar. Showcasing artists like Shaheen and Hussain is a way to engage ethnic diasporas in the U.S. who already know their work while turning new audiences on to their work.

WPA doesn’t have its own venues, so it leases out concert spaces, mostly in the District but also at the Strathmore in North Bethesda, Md. This season, they play host to dozens of shows in 11 venues, ranging from smaller spaces like the Smithsonian’s Baird Auditorium and the Sixth and I Historic Synagogue, which seats around 700, up to larger venues like the Kennedy Center Concert Hall, which can accommodate about 2,300 patrons.

“The fact that we don’t have our own building presents challenges, but it also allows us to go into different areas of the city with each performance,” said Bilfield, who was the director of Stanford Live, the performing arts producer at Stanford University, before taking on her current role at WPA in 2013.

WPA has two choirs, one for children and one for adults, which have performed on the “Today” show and at the White House, where President Obama recognized the organization in 2012 with a National Medal of Arts for “attracting renowned artists to Washington” and “inspiring generations of young performers to follow their passions.” 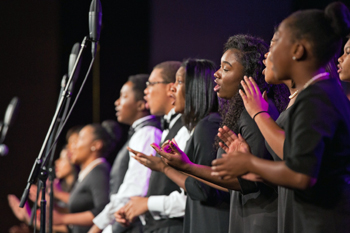 On March 5, WPA will host its annual gala and auction, always a favorite among diplomats, at the Andrew W. Mellon Auditorium on Constitution Avenue. The evening, which will be emceed by Nina Totenberg, NPR’s legal affairs correspondent, will include cocktails, an auction, dinner and dancing, not to mention a musical tribute performed by Midori, a Japanese violinist whose first (WPA) concert in Washington at age 15 helped launch her career. Japanese Ambassador Kenichiro Sasae and his wife are the honorary diplomatic chairs of this year’s event.

While the focus of this year’s gala is a tribute to Douglas Wheeler, WPA’s president emeritus, last year’s event honored the 40-year anniversary of the group’s Embassy Adoption Program, which partners embassies with D.C. public schools to broaden the horizons of fifth- and sixth-grade schoolchildren. The program has grown to include 68 embassies, which adopt a local classroom each school year. Diplomats introduce kids to the culture, food and language of their homelands, invite them to their embassies, and then the kids participate in a Model U.N. where they debate issues like climate change (also see “Embassy Adoption Program Celebrates Four Decades of Diplomacy, Plans Expansion” in the September 2015 issue of The Washington Diplomat).

Bilfield says that many of the children who have participated in the program develop an interest in global affairs, including one program alumni who joined the U.S. Foreign Service.

“The kids immerse themselves in the culture of that one country, they become like mini anthropologists, learning about the food, the language, the culture,” said Matthew Campbell, a Bay Area native who is WPA’s director of external relations. “It whets their appetite for further discovery of cultures around the world throughout their lives. It gives them a taste that there is a big wide world out there they knew nothing about.”

Campbell says that as much as the kids get out of the exchange, the diplomats benefit just as much.

“It’s definitely a two-way street,” he said. “For the embassy staff, beyond just getting out of the office, it’s a chance to revel in their own culture and history for an eager audience of young people who are captivated by learning about these faraway lands.”

He added: “It’s great PR for the embassies but it also connects them with the local citizenry in a way they may not have a chance to if they are cooped up at a diplomatic compound.”

Another element of WPA’s mission is to provide lifelong learning opportunities through arts education, including summer camps that offer training in classical music, gospel, jazz and dance, as well as the “Discovery the Symphony” initiative, which offers practical tips on things like what to wear, how to act and when to clap at a concert. 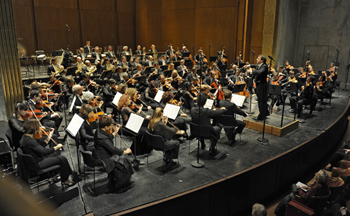 The Orchestre National de France was one of many international orchestras performing in the current of Washington Performing Arts.

Campbell says that this kind of help for newcomers is essential to expanding interest in classical music. He noted that back in the days of Mozart, it was acceptable to socialize, talk or even eat while the orchestra was playing.

“But some time in the 20th century, people were expected to sit and be silent during the show, even in between movements in a symphony,” he said. “Newbies hear the first movement end with a big flourish and go ‘hurray’ and start clapping, and they’ll be totally embarrassed when no one else is cheering. If you’re a beginner, the safest thing to do is wait until you see everyone else clap.”

WPA’s efforts to inform the public date back to Patrick Hayes, who used the medium of choice in his era: the radio. From 1949 through 1975, he had a weekly Sunday afternoon radio show that he used to promote the world of music and its place in D.C. culture. Decades later, WPA is still carrying on his mission by taking a curatorial approach to programming.

“We are a nonprofit, so it makes sense to try to introduce art forms that aren’t necessarily commercially successful, but that we think have cultural importance and that we think people ought to hear,” Campbell said. “This is why virtually every symphony orchestra in this country is a nonprofit — because without donations and grant support and tax exemptions, they would never make it. They’re not Taylor Swift.”

Campbell acknowledges that the group has to be careful about booking unknown jazz acts, for example, in 2,000-seat venues, where they are likely to struggle. And Bilfield says that in an era when people are busy and have an abundance of entertainment options, there are no “slam dunks” that are guaranteed to sell out.

But ultimately, WPA is guided by a desire to bring the cultures of the world and those art forms home to D.C. audiences.

“The arbiter of great art is not necessarily the marketplace,” Campbell said. “We like to lead our audiences on a journey with us.”