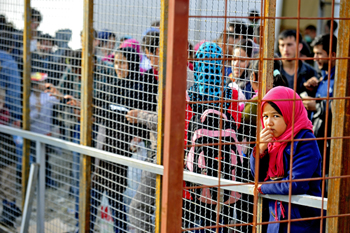 The European Union’s passport-free travel area known as the Schengen zone is under great strain, and with it the very fabric of the EU.

Schengen has been in the crosshairs of nationalist politicians as Europe’s refugee crisis swells, with over a million migrants pouring into the continent last year alone. The November terrorist attacks in Paris that exploited Europe’s porous borders laced the Schengen debate with fears of violence.

The 30-year-old Schengen pact, named after the village in Luxembourg where it was signed, now includes 26 countries, four of which are not EU members. By abolishing checks at Schengen members’ borders, the zone is supposed to uphold the EU’s early ideals of freedom of movement.

Yet European Commission President Jean-Claude Juncker warned in November that Schengen was “partially comatose,” and that its unraveling could threaten Europe’s single currency.

“If the spirit of Schengen leaves our lands and our hearts, we will lose more than Schengen. A single currency makes no sense if Schengen falls,” Juncker told the European Parliament. “It is one of the keystones of European construction.”

Europe’s politicians know what needs to be done to save Schengen, but political will is another matter, according to Stefan Lehne, a former Austrian diplomat and visiting scholar at Carnegie Europe in Brussels.

“You don’t have control over external borders, and you don’t have a good functioning system to distribute refugees,” Lehne told The Diplomat. “Unless these two flaws can be fixed, there is no real prospective for Schengen to be able to function again.”

The collapse of Schengen would be a heavy blow to the EU’s already anemic economies, impeding not only tourism but also vital cross-border trade. According to the French government think tank Stratégie, reversing the bloc’s system of open borders could cost it over 100 billion euro through 2025.

Susan Fratzke, an EU-focused policy analyst at the Migration Policy Institute, said that, however belatedly, European leaders have awoken to the danger of Schengen falling apart.

On Oct. 27, 2015, in the former Yugoslav Republic of Macedonia, an Afghan girl waits behind a wire fence to board the train at a reception center for refugees and migrants in Gevgelija. In response to the influx of migrants, European nations are imposing stricter border controls that are testing the European Union’s passport-free travel area known as the Schengen zone.

“There’s broad agreement within the EU about the importance of Schengen to the construct of the European Union itself, both economically and politically, but the issue is what are the steps that need to be taken to safeguard it,” Fratzke said.

An EU official based in Washington echoed that sentiment. “We will save Schengen by getting better control of the EU’s external border,” the official told The Diplomat, adding that for too long, “we have forgotten that the necessary corollary of the removal of internal borders within the Schengen area is a real and efficient control of our external borders.”

Officials have floated the idea of suspending Schengen rules for two years under emergency measures, which would be an unprecedented maneuver. Tove Ernst, a spokeswoman for the European Commission, said the commission is working with member states to ensure border controls are temporary and proportional to what is needed.

“In exceptional circumstances, exceptional measures are needed,” Ernst said in a statement to The Diplomat. “We are using the flexibility in the system to ensure that the Schengen system is safeguarded.”

Eye of the Storm

Despite the optimistic rhetoric, Schengen is in danger of unraveling as more and more countries institute border controls. In February, Austria unilaterally capped the number of migrants it was willing to accept, threatening to torpedo a unified EU response to the crisis. Transit nations like Macedonia and Serbia have also tightened their asylum policies.

Europe is grappling with its biggest migration crisis in years: Over 1 million migrants and refugees fled for Europe by sea in 2015, according to the United Nations. Many died trying; the International Organization for Migration says over 400 people have died in the first six weeks of 2016 alone. New arrivals this year have already exceeded 100,000 migrants, surpassing last year’s figures.

Greece and Italy are often where these refugees make landfall, and the two Schengen members are struggling to cope with the flow of people. Some 2,000 refugees arrive on Greece’s shores every day, most of them fleeing the carnage in Syria, according to the International Rescue Committee.

EU officials have decided to set up “hotspots,” or centers for processing migrants, in Greece and Italy. Migrants can register at a hotspot on the Greek island of Lesbos, but they cannot apply for asylum there, as the Economist reported. Greek officials plan to open a few other hotspots, but that initiative has reportedly been undercut by bureaucratic infighting.

The spotlight on Greece intensified after the revelation that at least one of the perpetrators of the Paris terrorist attacks had registered as a refugee in Greece in October.

The European Commission says it is keeping a close eye on how Greek authorities respond to the influx of refugees and has fielded recommendations on how Athens can improve on the “serious deficiencies” in its application of Schengen rules. Some eastern EU members have pushed to seal Greece’s borders and kick the country out of the zone altogether. In response, Athens has lashed out at countries like Austria for creating a bottleneck of migrants in cash-strapped Greece, which continues to struggle with its own economic crisis.

The commission last year agreed to a scheme that would alleviate pressure on countries like Greece and Italy by relocating 160,000 refugees to other EU member states. But that plan has hardly gotten off the ground: Only a few hundred refugees have been moved so far, according to official data.

Acknowledging current border measures to be insufficient, the European Commission has proposed a new agency, known as the European Border and Coast Guard, to tighten border security. The new agency would draw on 1,500 reserve personnel and set up a “risk analysis center” to monitor the flow of refugees.

“There will no longer be shortages of staff or equipment for European border operations,” the commission declared in making the announcement.

(NATO also recently announced it would deploy ships to the Aegean Sea to deter to human smugglers, although it is unclear whether the alliance would intercept boats carrying refugees.) 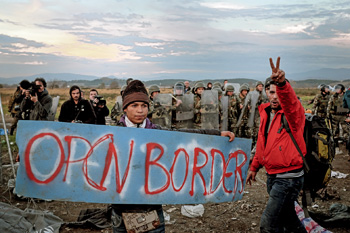 On Nov. 26, 2015, refugees and migrants protest border restrictions near the Greek town of Idomeni, close to the border with the former Yugoslav Republic of Macedonia. They are waiting to cross into that country, where the government has begun restricting the flow of refugees and migrants on the move and is allowing only Syrians, Iraqis and Afghans to continue their journey.

Officials plan to stress to the European Council the importance of rapidly approving the Coast Guard proposal, according to spokeswoman Ernst. “The sense of urgency heightens every day to prepare Europe to effectively manage the current crisis and future arrivals,” she said.

If approved, the Coast Guard proposal would make it “much more likely” that the Schengen area regains control of its external borders, said Lehne, the Carnegie Europe scholar.

The proposal can’t come soon enough for Schengen’s backers. European Council President Donald Tusk said recently that the EU has “no more than two months” to save Schengen by substantively addressing Europe’s refugee crisis. Tusk’s deadline will come in the form of a mid-March summit of the council where officials hope to deliver tangible answers to the crisis.

Coming up with those answers means tackling not only the question of Europe’s disjointed border controls, but addressing the root causes of the migrant crisis — a far more difficult challenge.

The majority of refugees are fleeing violence in Iraq, Afghanistan and, in particular, Syria, whose civil war has bedeviled world leaders for five years. An announced temporary ceasefire notwithstanding, peace in Syria — and therefore curbing the exodus of Syrians coming to Europe — seems a distant prospect as a variety of actors from Russia to the Islamic State have transformed the country into a proxy war.

But, as the Economist pointed out in a Feb. 6 editorial, Europeans have failed to create a well-regulated system for processing asylum claims and assisting refugees in the neighboring countries to which they have escaped.

“Scandalously, aid for Syrians was cut in 2015 even as the war grew bloodier: aid agencies got a bit more than half of what they needed last year, according to the UN. Donors at a conference on Syria in London this week were asked for $9 billion for 2016 — about as much as Germans spend on chocolate every year,” the magazine wrote.

That has left Turkey, Lebanon and Jordan to shoulder the burden of hosting the majority of the 4.5 million Syrians who have fled the country.

Meanwhile, Germany has absorbed a great number of refugees who streamed into Europe last year. But after a string of sexual assaults in the city of Cologne, widely blamed on North African immigrants, and the terrorist attacks in Paris, German Chancellor Angela Merkel is under intense pressure to revise the country’s open-door policy. Merkel visited Ankara last month in a bid to push Turkey to do more to stem the tide of refugees coming to Europe, although Turkish President Recep Tayyip Erdogan counters that Europe needs to do less lecturing and more helping if it wants to find a solution to the problem.

Back home, Germany has appealed for a more equitable distribution of migrants among EU member states, to little avail. Countries such as Slovakia have balked at being forced to take in migrants, many from poor, war-torn Muslim nations, arguing that such a plan erodes national sovereignty and could exacerbate unemployment.

While bureaucrats in Brussels man the barricades in Schengen’s defense, politicians on Europe’s fringes are striking a discordant tone. Europe’s populist, anti-immigrant parties have gained in the polls as the narrative of insecure borders and immigrants gobbling up jobs resonates with many people.

Marine Le Pen, head of France’s National Front party, has called Schengen “madness” and pledged to unilaterally withdraw from the travel zone. In December, her party won the largest share (30 percent) of the national vote in the first round of regional elections, although it failed to win any regions in the second round of voting.

It is a self-perpetuating cycle in which the migration crisis boosts right-wing parties in the polls, undercutting national governments’ ability to address the crisis, said Lehne of Carnegie Europe.

“The problem of migratory pressure is something that will be with Europe for many years, possibly decades,” he predicted.