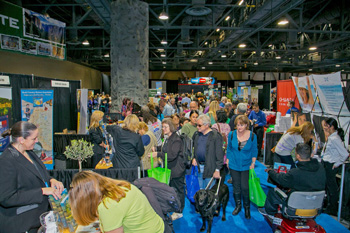 With peak travel season fast approaching, many winter-weary Washingtonians are counting down the days until the coveted summer slowdown. Just in time, the Travel & Adventure Show came to town to offer them a respite from the cold — and a place to dream about their next escape.

Now in its 11th year, the multicity show gives travel lovers ideas and tips for their upcoming vacations — whether it’s Alaska, India or New Zealand — along with cultural performances, tastings and other hands-on activities. It also offers an all-star lineup of experts such as Rick Steves and Samantha Brown, and serves as a convenient one-stop shop to meet with companies that can help trip planners save time and money. Held March 7 and 8, the D.C. leg of the show attracted hundreds of people to the Washington Convention Center.

John Golicz, founder and CEO of the Travel & Adventure Show, introduced a new feature this year, the Savvy Traveler Theater. Visitors could attend seminars like “How to Fix Your Trip When it Breaks” and “Travel Skills, Tips and Tricks: Know Before You Go.” Journalist and Travelchannel.com host Ryan Van Duzer encouraged attendees to “Get Off the Couch and Get Out There!”

The 11th annual Travel & Adventure Show on March 7 and 8 attracted hundreds of people to the Washington Convention Center.

Golicz got the idea for the theater when the show placed speakers like “The “Travel Ambassador” Angel Castellanos on its destination stage and the audience swelled to capacity.

Golicz said he enjoys traveling once show season is over and tends to favor sunny, sandy destinations with his wife, though he also enjoys Europe. “I’m also a big boater; we tend to travel around a lot by boat,” Golicz added. “We mix traditional vacations and more adventurous stuff on our own.”

Over the past three years, Golicz and his family have started a new travel tradition: taking a multigenerational trip. Golicz, his wife and children (who are grown and in their 20s), his sister-in-law’s family and their younger children, grandparents and other relatives spend time in a rented villa. “There’s 17 of us in all,” Golicz said. “That for me is the highlight of the year.”

The D.C. stop brings in a lot of business for the show, given that many of the city’s inhabitants are frequent travelers.

“What we hear from exhibitors is that D.C. has a very highly educated base,” Golicz said. “[Washingtonians] are worldly, culturally attuned, used to traveling, come armed with great questions and are very diverse.”

But what if you’re so well traveled that you’re bored with your usual destinations?

Pauline Frommer, editorial director of Frommer’s Travel Guides and Frommers.com and daughter of the famous veteran traveler Arthur Frommer, recommends giving Taiwan a try. “There are some spectacular nature and cultural sights there. There’s Chinese culture but with a softer edge in terms of person-to-person interactions,” she said. “I’m also a big fan of the Cayo District of Belize. It’s fabulous, not too crowded and there are plenty of ancient Mayan sights to explore, like temples and caves where human sacrifices took place, and lots of natural beauty.”

Frommer’s father Arthur is founder of the Frommer’s series of travel guides and Budget Travel magazine. Since the 1950s, Frommer has published many books for travelers, including the classic “Europe on 5 Dollars a Day.”

Growing up, Pauline and her family didn’t really vacation. All of their trips were for work, either to update “the book” (“Europe on 5 Dollars a Day”), or to check on former ventures like four hotels Arthur founded, or to check in on a tour company. “That being said, when we were researching ‘the book,’ I always looked forward to our time in Copenhagen, because I absolutely adored the Tivoli Gardens,” Pauline recalled. “It was my dream in life, when I was about 8, to work as one of the marching child soldiers there. Alas, you had to be Danish to get that gig!”

Now a well-traveled adult, Pauline loves to purposely get lost and wander. She will jump on public transportation in an unfamiliar area and ride to a less touristy part of the city. “I’ll go without a map and resist looking at the map on my phone, and just wander so that I can see what local life actually is like in the destination,” she said. “I’ve met the most wonderful people and have seen fascinating sights that way.”

For budget-conscious young Washingtonians who may not have the means to travel as their older counterparts do, Pauline recommends taking advantage of the sharing economy. Travelers can now stay for free in a spare room of someone’s home through sites like GlobalFreeloaders.com and CouchSurfing.com, whose website tagline reads: “Stay with locals instead of at hotels.”

“Lodgings can take a big chunk out of your travel budget, but thanks to these sites and a number of others, it’s possible to sleep in safe, clean places for a pittance,” she said. “Hostels are terrific too, for young travelers, not just because of the cost but because they’re social hubs for people from across the globe.”

It’s even an option for those looking to make a little money — as hosts. Living in D.C., the demand is certainly there. “If you live in the Washington area, that’s golden,” Schultz said.

However, if you are setting out to places where spring and summer are considered the off-season, do your homework. “If you’re getting a really cheap ticket to Kuala Lumpur or Hanoi, it may be monsoon season and you may wind up never leaving your hotel,” Schultz cautioned. “Things are discounted for a reason.” 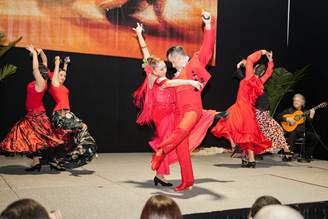 The Global Beats Stage at the Travel & Adventure Show in Washington, D.C., featured a variety of cultural performances.

One mistake Schultz made in the past was not having a printout of her hotel reservation on a trip. “In this day and age, with so much information readily available on tablets, iPads, iPhones, you might be busy and working and think, ‘I’ll just wing it,’” she said. “If you’re in line to check in and someone behind the desk is flustered and the hotel is sold out, it’s easier for them to say they have no recollection of your reservation. A printout gives you a better chance of them admitting their mistake.”

However, if one is up for the uncertainty, traveling without a reservation could work to your advantage. If you arrive the night before and the hotel knows it has 15 percent of its rooms available, it will offer discounts that aren’t typically available when booking in advance, according to Schultz. “Personally, I don’t like to compromise,” she added. “I like to know I have a hotel on the other side of my flight or train ride.”

Hot destinations Schultz recommended include Sri Lanka, Vietnam and Eastern European countries. Many people have been lately asking her about Cuba, where the Obama administration recently eased travel restrictions for Americans, although trips to the communist island still ostensibly need to have an educational or cultural component. Schultz will be visiting Cuba again in April and has previously been there twice independently.

However, if you don’t consider yourself travel savvy or a real adventurer just yet, it could make the experience not as remarkable as one would hope. “Infrastructure is very limited at best, and tourism is not their strong point,” Schultz said. “It will take some time for them to be prepared for the floodgates to open. Right now it’s mostly Canadians and Europeans who visit.”

Although challenging, Schultz found her time on the island — just 90 miles from Florida but preserved in time thanks to a U.S. economic embargo — a very rewarding experience. Her advice is to go with American-licensed tour groups that are authorized by the government to travel there. “Go now before McDonald’s arrives!” she said.

For those working in embassies in D.C. who are looking to explore the United States this summer, Schultz shared some interesting advice. A Georgetown University graduate, Schultz completed her junior year abroad. Her Italian friends always told her the three places they wanted to visit in America were New York City, Orlando, Fla., and the Four Corners, or what they saw as the Wild West.

“They were absolutely fixated. They’d seen every John Wayne movie in the book,” Schultz said. “During one of their trips to visit me, we drove out there and saw Utah, Colorado, New Mexico and Arizona, [including] Monument Valley, which is a Navajo reservation and background for every Western that’s ever been filmed.”

Many semi-autonomous Native American tribes still inhabit the Four Corners, where some of the country’s earliest chapters began, Schultz added. She also noted that if you’re looking to plan next year’s vacation, 2016 will be a big year for the National Park Service, as it is celebrating its 100th anniversary.

And if you missed the Travel & Adventure Show this year, mark your calendars: Next year’s expo comes to town Feb. 20 and 21.