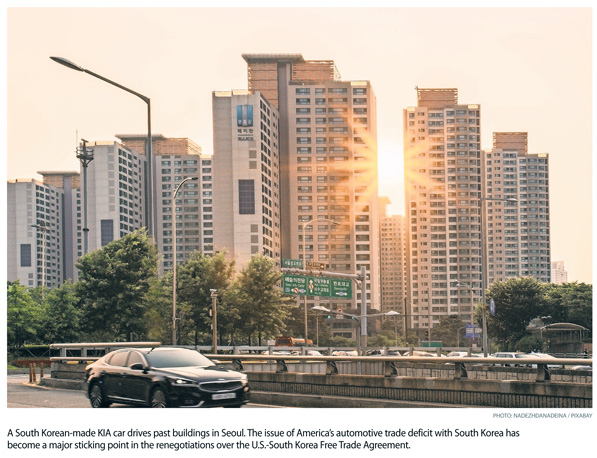 The U.S. and South Korean governments have begun renegotiating their 2012 free trade agreement, as demanded by President Trump, even though most American industries that trade under the agreement are happy with its present form.

This is the second renegotiation of the agreement since the U.S. and Korean governments signed it in 2007.

“I suspect, from a practical standpoint, that they [the Koreans] would like this to be the last,” said Troy Stangarone of the Korea Economic Institute.

This renegotiation also occurs at a time of high tension between the United States and North Korea. So, maintaining a good relationship with South Korea is doubly important.

“Given what’s going on, any friction [between the U.S. and South Korea] would be unfortunate,” said a former U.S. trade official.

The renegotiation of the U.S.-Korea Free Trade Agreement (also known as KORUS) is part of Trump’s broader “America First” agenda that includes an aggressive trade crackdown on countries that he says are unfairly hurting American workers. More notably, Trump dropped out of the Trans-Pacific Partnership, a sweeping trade accord that is now being reworked by the 11 remaining Pacific-Rim member states. Canada, Mexico and the U.S. are also in the midst of contentious talks to renegotiate NAFTA at Trump’s instigation.

This year, Trump is expected to slap tariffs on China for a range of products, including steel, aluminum and solar panels and washing machines. American manufacturers in these industries support the move, arguing that China has been flooding the market with cheap products. But any protectionist barriers Trump erects may trigger a massive trade war that experts warn could backfire on the president by making goods more expensive for American consumers and threatening U.S. businesses.

Lighthizer said on Jan. 5, after the first round of the current KORUS renegotiation, that there was “much work to do to reach an agreement that serves the economic interests of the American people.” He didn’t elaborate, but a USTR statement from December 2017 said the renegotiation’s purpose was to “resolve several problems regarding market access in Korea for U.S. exports and, most importantly, to address the significant trade imbalance.”

Lighthizer’s Korean counterpart, Trade Minister Kim Hyun-chong, said he would negotiate with the Americans in good faith, but would rather terminate the agreement than end up with a bad deal for Korea.

Trump’s animus for KORUS, which he said was “a horrible deal,” is based on the U.S. merchandise trade deficit with Korea, which has more than doubled since KORUS took effect — from $13.2 billion in 2011 to $27.6 billion in 2016, according to the U.S. Census Bureau. That deficit is relatively small compared to America’s trade deficit with China, which in 2016 totaled nearly $350 billion. 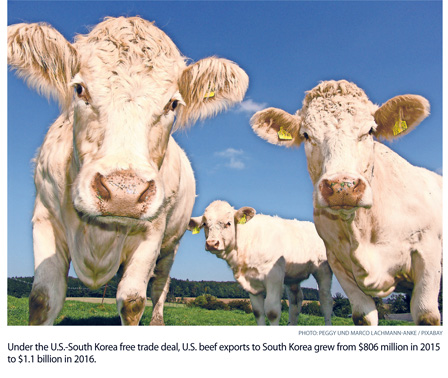 Nevertheless, Trump has threatened to end KORUS, but that may just be a negotiating tactic. He has said the same about NAFTA. No president has ever terminated a free trade agreement. The United States has 14 of them with 20 countries.

American industries such as beef and dairy have benefited greatly from the agreement, which also removed car tariffs in 2016. While the the sale of U.S.-made cars in Korea has significantly increased over the last five years, they are still dwarfed by the sale of Korean-made cars to the U.S. In fact, the bulk of the trade deficit stems from the gap in car sales.

Except for the auto industry, there is no significant constituency in the United States that is pushing for a major revision of KORUS. U.S. Chamber of Commerce President and CEO Thomas Donohue said in a speech that it was “a vital trade pact with a key ally…. We agree that in some areas that the Koreans need to do more to faithfully implement the deal. But overturning it would hurt American farmers and manufacturers — and benefit only our foreign competitors.”

Myron Brilliant, executive vice president and head of international affairs at the U.S. Chamber of Commerce, writing in an op-ed for Korea Joongang Daily, points out that U.S. exports to Korea are on pace to set a record in 2017, chipping away at the trade deficit. He also argues that KORUS kept U.S. exports to the country steady even as Korea’s imports from around the world plunged over 20 percent in the 2015-16 period.

But he adds that South Korea needs to address longstanding concerns among U.S. companies, including the auto, pharmaceutical and medical device sectors. “Furthermore, unpredictable and inconsistent regulations, coupled with Korea-unique standards and thinly veiled industrial policies have given investors pause,” he wrote.

A Korean official, who asked not to be named, said the government agreed to the renegotiation to “enhance the benefits of the original agreement.” He declined to say what that might entail, with one exception: “We have made it very clear that agriculture cannot be discussed.”

It has been reported that the Trump administration planned to push for agriculture-related concessions from the Koreans, even though the U.S. enjoyed a $5.7 billion agriculture trade surplus with Korea in 2016, according to the U.S. Agriculture Department.

“KORUS has been positive for U.S. ag exports…. We want to keep that going,” he said. Salmonsen said other economic sectors may hope for changes to the agreement, “but we haven’t heard that from the ag community.”

KORUS has been particularly good for U.S. beef producers. Before it took effect, Korea imposed a 40 percent tariff on U.S. beef imports. It 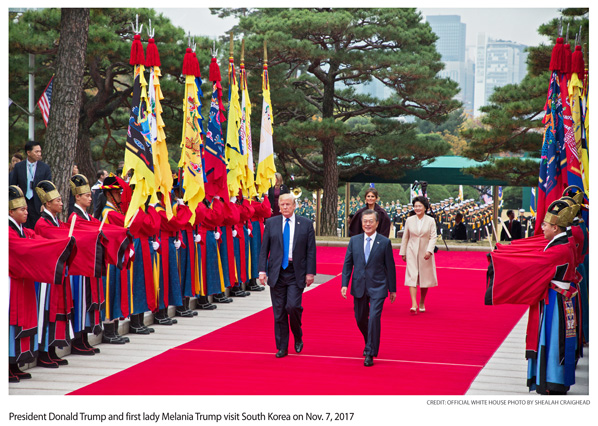 was to be reduced gradually to zero over 15 years and now stands at 24 percent. The renegotiation may lead to a faster phase-out of the beef tariff, and “if that happens, that’s good,” Salmonsen said.

The Korean official said KORUS had bestowed benefits on both countries. For example, American car sales in Korea rose after KORUS took effect and Korea gradually lowered the Korean car tariff on American cars from 8 percent to zero. U.S. auto exports to Korea have more than tripled from 13,700 units in 2011 to 49,100 in 2015, according to the Korean government. The U.S. tariff of 2.5 percent fell to zero for imported Korean cars when KORUS took effect.

Still, the U.S. auto industry thinks it can and should do better. So does the Trump administration. In 2016, U.S. imports of Korean-made cars totaled $21 billion, while American-made car imports to South Korea only reached $2.2 billion.

“Among the most important reasons for the increased [trade] deficit has been the imbalance between automotive imports and exports,” Commerce Secretary Ross said in a speech in December 2017. He said the Koreans imposed “significant non-tariff trade barriers” on imports of American cars, but he didn’t identify them.

He said the car industry wants two outcomes from the renegotiation. One is an assurance from the Koreans that “if a product is acceptable for sale in the United States, it’s acceptable in Korea.” Specifically, that means not applying environmental and safety standards that are tougher than American standards, he said.

Doing away with these requirements is not likely to significantly affect the U.S.-Korean auto trade balance, especially when you consider that the Korean auto market is one-tenth the size of the U.S. auto market, Stangarone said. Moreover, the auto trade imbalance may stem in part from a lack of interest in American-made cars among Korean consumers, who tend to gravitate toward luxury models from German automakers, Reuters reported last July.

The auto industry’s other hoped-for outcome is that Korea “will address currency manipulation. The won is a highly managed currency,” Blunt said.

He acknowledged that the Treasury Department does not consider Korea a currency manipulator, although it has the country on a “monitoring list” of trading partners whose currency practices merit close attention. 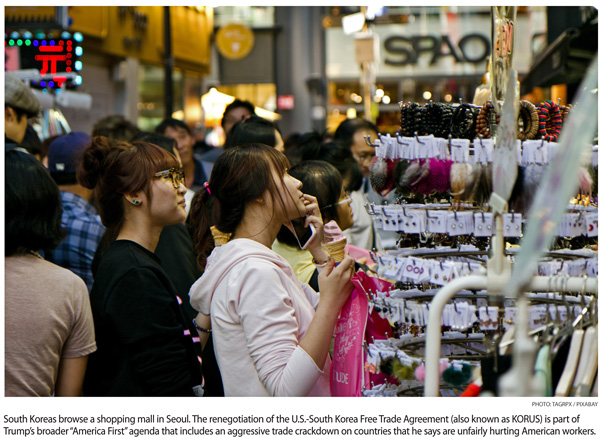 U.S. service industries, such as banking, finance, communications, equipment leasing and express delivery, have also reaped measurable benefits from KORUS. They aren’t lobbying for changes to it. The office of the U.S. Trade Representative estimates that U.S. service exports to Korea totaled $21.6 billion in 2016 and that service imports therefrom came to $10.9 billion. Thus, the United States had an estimated $10.7 billion service trade surplus with Korea, thanks in part to Korea’s agreement to treat U.S. service companies the same as it treats domestic ones.

“The U.S.-Korea Free Trade Agreement has provided generous opportunities for growth in services trade and investment,” says a statement from the Coalition of Service Industries. “As the U.S. administration continues engagement with Korea and seeks to find ways to potentially improve KORUS, CSI urges preservation and continuation of the agreement given the vast benefits KORUS has provided to U.S. services firms exporting to and operating within Korea.”

KORUS was negotiated and signed by the George W. Bush administration in 2007, but Bush didn’t submit it to Congress for ratification. It languished until 2010, when then-President Barack Obama decided to move ahead with it, but not before demanding changes favorable to the U.S. auto industry. U.S. and Korean negotiators held several rounds of talks in 2010 and agreed on changes that won the approval of the industry and the United Automobile Workers union. Obama then submitted it to Congress, which ratified it in March 2012.

Trade experts are in unanimous agreement that a $27.6 billion bilateral trade deficit cannot be significantly reduced through renegotiation of a free trade agreement, as Trump and Lighthizer seem to expect. Calculating a trade deficit is not simply a matter of subtracting exports from imports. Household savings and investing also play a role, and economists predict that the tax cuts that recently took effect will increase the U.S. trade deficit with Korea and the rest of the world.