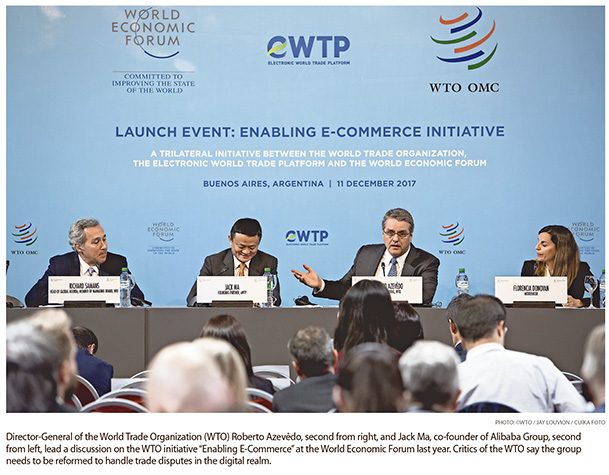 Consequently, “the whole WTO portfolio is in limbo,” said Gary Hufbauer, a trade expert at the Peterson Institute for International Economics. “There is no forward momentum in terms of negotiations. There’s no sign that that’s going to be reversed.” Consequently, all the progress the United States has made toward keeping the WTO relevant in the 21st century has ground to a halt.

The White House has drafted a bill that would have roughly the same effect as withdrawing from the WTO. Titled the Fair and Reciprocal Tariff Act, or FART Act, it would allow the president to impose tariffs of any level against any country of his choosing for any reason of his choosing — without congressional approval or regard for international rules. Trump has not submitted it to Congress. It would have zero chance of passage if he did.

As one trade lawyer told Jonathan Swan of Axios, which first reported the leaked bill, “We think he’s nuts, but not that nuts.”

Yet even if the so-called FART Act never materializes, Trump’s tariff war has already shaken the multilateral global trading system espoused by the Geneva-based WTO, which was founded in 1995 to resolve disputes among member countries and reduce trade barriers.

The U.S. and China are already engaged in a tit-for-tat $50 billion tariff war, with Trump threatening to slap duties on an additional $200 billion in Chinese goods if Beijing does not reduce its trade deficit with the U.S. The president also withdrew the U.S. from the Trans-Pacific Partnership and is in the midst of contentious renegotiations with Canada and Mexico over NAFTA. In addition, he imposed steel and aluminum tariffs on Canada and the European Union under the pretext of national security. The move infuriated some of America’s closest allies, who responded with retaliatory tariffs and vows to lodge legal challenges at the WTO, particularly if the president moves forward with his threats to impose additional tariffs on imported cars.

Those legal challenges may succeed, but disputes at the WTO take months or even years to resolve. And any victory could prompt Trump to either abandon the WTO or ignore its rulings, both of which could spell the demise of the embattled organization, whose 164 members together account for nearly 100 percent of global GDP and global trade.

Moreover, the WTO’s Appellate Body “might be out of business next year,” because the Trump administration refuses to allow the reappointment of its judges, Hufbauer told us. The Appellate Body is a court within the WTO that considers appeals from the WTO’s Dispute Settlement Body. Traditionally, in the interest of continuity, judges who are hearing cases when their terms expire have been allowed to stay on until those cases are finished. The Trump administration objects to that practice and has vetoed all Appellate Body reappointments that have come up since Trump became president. The Appellate Body has seven judges when it’s at full strength. It is now down to four. Two more departures will require it to cease operating.

Nonetheless, the WTO is not in danger of collapsing, said Stuart Malawer, a professor of law and international trade at George Mason University in Fairfax, Va. However, he said, “everyone at this point is very concerned” about what Trump might do next.

While the president has flip-flopped on all kinds of issues since coming into office, his belief that free trade hurts American workers has remained steadfast throughout the years, and he repeatedly disparaged the WTO on the campaign trail.

“I don’t know why we’re in it. The WTO is designed by the rest of the world to screw the United States,” Trump said, according to Axios, citing an unnamed source.

In reality, the United States has historically done well in WTO dispute settlement proceedings. It is the most active participant in the system and has won about 86 percent of the cases it has filed since 1995, when the WTO was established. The U.S. has lost most of the cases that other countries have brought against it, but that is true of virtually all 164 WTO member countries; the complainant almost always wins.

The “WTO knows some reforms are needed,” Commerce Secretary Wilbur Ross said July 2 on CNBC. “So, I think there really is a need to update and synchronize its activities and we’ll see where that leads. But I think it’s a little premature to talk about simply withdrawing from it.”

Dennis Shea, Trump’s ambassador to the WTO, would lead any efforts to reform it, but he has almost no background in international trade. He was a member of the U.S.-China Economic and Security Review Commission for 11 years and has focused primarily on China’s trade practices since he arrived in Geneva.

“It is amazing to watch a country that is the world’s most protectionist, mercantilist economy position itself as the self-proclaimed defender of free trade and the global trading system,” Shea said about China in his first speech to the WTO after taking office on March 1, 2018.

China has been a source of frustration for the U.S. and other WTO members since it joined the body in 2001 and companies began flocking to the country to take advantage of its cheap labor. In fact, many economists say China’s entry into the WTO hurt American manufacturing jobs far more than the country’s current trade deficit with the U.S., which is due to a variety of macroeconomic factors. 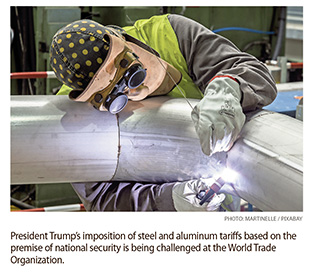 The U.S. argues that the WTO should no longer classify China as a developing nation, which lets it take on fewer WTO responsibilities, considering that it is now the world’s second-largest economy. Another complaint is that China has flouted the rules-based system with its theft of intellectual property, support for state-run enterprises and insistence that foreign firms give up technology secrets to access its vast consumer market. But the WTO, which was built primarily around the trade of physical goods, is ill-equipped to mediate the growing number of disputes in the digital realm.

The EU has pushed to reform the WTO to ensure a more level playing field, but finding consensus among the group’s disparate members has been elusive, especially in today’s era of increased opposition to globalization and free trade.

Meanwhile, the United States has so far shown scant interest in continuing the nitty-gritty work of updating WTO rules that previous administrations worked on, such as writing stricter rules for state-owned enterprises. They also include efforts to limit WTO members’ veto power by encouraging so-called “plurilateral” agreements that don’t require the acquiescence of all 164 members, e.g., the Trade Facilitation Agreement, which streamlined bureaucratic red tape and took effect in February 2017 with the ratification of 110 members, including the United States.

More recently, however, Trump has hinted he might be willing to work with allies to reform the WTO. The president seemed to walk back from an all-out trade war last month when he announced a deal with European Commission President Jean-Claude Juncker to hold off on proposed car tariffs and work toward resolving the steel and aluminum dispute in return for the EU buying more American soybeans and liquefied natural gas.

In addition, The Economist reported that U.S. Trade Representative Robert Lighthizer has been quietly talking to the Europeans and Japanese about reforming the WTO to address China’s unfair trade practices.

But the president has abruptly changed his mind before, and his record on multilateralism is not exactly encouraging.

Trump has expressed nothing but disdain for international agreements, such as the Trans-Pacific Partnership, the Iran nuclear deal, the Paris climate agreement and the U.N. Human Rights Council. He has pulled the United States out of all of them.

If Trump pulled out of the WTO, he could slap tariffs on tens of thousands of goods, which would dramatically raise prices for American businesses and consumers and throw global markets into turmoil. While many doubt he would resort to such an extreme measure, economists also doubted Trump would move ahead with the controversial steel and aluminum tariffs that he has imposed on key U.S. allies.

In a March 9 blog post, Edward Alden of the Council on Foreign Relations argues that those tariffs may have been the tipping point for the WTO, which he says “had been dying a slow death for a long time.”

“China in particular never accepted the norms of the WTO, and its spectacular economic success pursuing policies that too often defied the organization’s market-based principles did more than any other country to weaken the legitimacy of the system. The failed Doha Round negotiations, launched in 2001 and never successfully completed, showed that member nations had no capacity to find the compromises needed to update the WTO’s rules. Trump only gave it the final nudge over the cliff” when he imposed steel and aluminum tariffs under the guise of national security, Alden wrote.

If the WTO rules in favor of Trump’s national security argument, Alden said it will open the floodgates for other countries to use security as an excuse to erect trade barriers. If it rules against the U.S., Trump would likely ignore the decision, he said, “rendering the dispute process null and void.”

“Regardless of how any dispute plays out, the tariff fight — unlike every other major trade skirmish for the past quarter century — will not be resolved within the framework of WTO rules,” Alden concluded.

“The real impact [of Trump’s hostility toward the WTO] hasn’t really been felt yet,” Malawer of George Mason University predicted. That may change, he said, if the Dispute Settlement Body (DSB) rules against Trump’s invocation of national security in imposing steel and aluminum tariffs against other countries. It seems likely that it will, since Trump has said the tariffs against Canada were in response to its high tariffs against U.S. dairy imports — not about national security. (China has lodged its own separate WTO complaint to protest Trump’s plan to impose new tariffs on $200 billion worth of Chinese imports.)

With the EU, Canada, Mexico and Turkey challenging the U.S. steel and aluminum tariffs in the DSB, the Trump administration has fired back, lodging its own legal challenges at the WTO in retaliation for those nations’ retaliatory tariffs. He has also launched a case to counter China’s tariffs. So ironically, while Trump may hate the WTO, he doesn’t mind using it for his own purposes.

Malawer said that if the DSB rules against the United States, the gloves will come off. Trump could ignore the ruling and even double down on his protectionist agenda. Other countries could also use national security to protect their domestic industries. If Trump loses, allies would be empowered to impose even more punitive tariffs on the U.S. “You would see some significant fireworks occurring at that point,” Malawer said.

John Brinkley is a contributing writer for The Washington Diplomat and was chief speechwriter for the Office of the U.S. Trade Representative in the Obama administration.