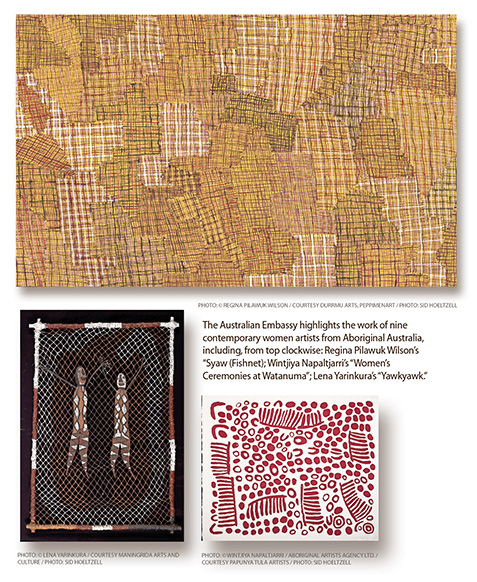 Lines, dots and repetition yield to a meditative and contemplative experience at the Phillips Collection this summer, where the latest special exhibition focuses on the remarkable work of nine contemporary women artists of Aboriginal Australia.

“Even though we don’t understand a lot of the background, the symbolism and the content of these works … I think there are universal meanings in these works that can touch us,” curator Klaus Ottmann told The Washington Diplomat. “There’s this view about the human condition and connecting the earth with the sky that is really powerful in these works that I think can help anyone to reflect back to themselves and see themselves in the larger picture of the universe.”

On a recent Sunday afternoon in a mostly empty gallery, large-scale canvases immediately grabbed the eye, as did the Larrakitj poles, striking memorial poles that stood in the center of two rooms. It’s a sparser exhibition than some of the more recently packed shows at the Phillips, giving the paintings — and visitors — space to take in the vibrant colors and imagery. “Marking the Infinite” has leaned into this feeling, encouraging visitors to take the contemplation audio tour to encourage slow looking.

Images are made with a variety of materials, with bark, palm leaves, wood, feather and paint all making appearances on canvases. Iconography is connected to specific clans, and the curators have highlighted quotes from the artists, making for a fuller experience by allowing museumgoers to read firsthand from the women, rather than only a curator or anthropologist.

“My grandfather and grandmother used to make big fishnet, before Europeans came to Australia. We call it syaw. They used to make four or five and put them in the water. I forgot the stitch because the missionaries took us in, and my grandparents died,” Regina Pilawuk Wilson states in the caption to her work, “Syaw (Fishnet).”

“My big sister told me to do the story on painting for our children and grandchildren, so they can remember what our ancestors used to do a long time ago. She drew it on the sand, on the dirt, and told me to paint it. I’ve got to paint the story on the canvas. It’s like our history,” Wilson said.

The Phillips’s focus here on women artists is particularly welcome, given some of the recent blockbuster shows at gallery — like “Ten Americans: After Paul Klee” and “Renoir and Friends: Luncheon of the Boating Party” — that highlighted male artists.

And this group is particularly fascinating, as women in Aboriginal Australia only started painting about 20 years ago, Ottmann said. Traditionally, it was only the men who were artists. This allowed the women, who “weren’t limited by the thousands of years of tradition that the men are committed to,” to be “much freer in expressing themselves,” he said.

“The works are, in a way, more innovative, more experimental and more modern. Because modernism is really about breaking with traditions,” Ottmann told The Diplomat.

Women artists not only offer a different perspective on 40,000 years of culture and history found in male-dominated Aboriginal art, they also help modern-day communities survive by controlling the artwork that is produced and sold around the world.

The Phillips worked closely with the Australian Embassy for this show. Officials were “extremely helpful” in helping arrange Wilson’s visit to paint murals in the museum’s courtyard, Ottmann recalled.

Diplomats assisted the museum not only in bringing Wilson to the gallery, but also in informing staffers about protocols for her visit — for instance, in making sure a representative of the Piscataway Indian Nation, the traditional owners of the land that the museum is on, would be there to officially invite her and welcome her to paint.

An embassy official also “came to talk about protocols, pronunciation for our staff and our guards, so we all know how to speak about the art,” he said.

“It was an incredibly positive experience working with the embassy,” Ottmann said.

This show is “a first for the Phillips Collection,” Ottmann noted, as the gallery has never before held an exhibition of Aboriginal Australian art.

“At the same time, the exhibition is very much in line with a very long tradition of fostering a global conversation between modern and contemporary art that goes back to our founder Duncan Philips, who very strongly believed in the power of art to promote peace and resolve conflicts,” he said.