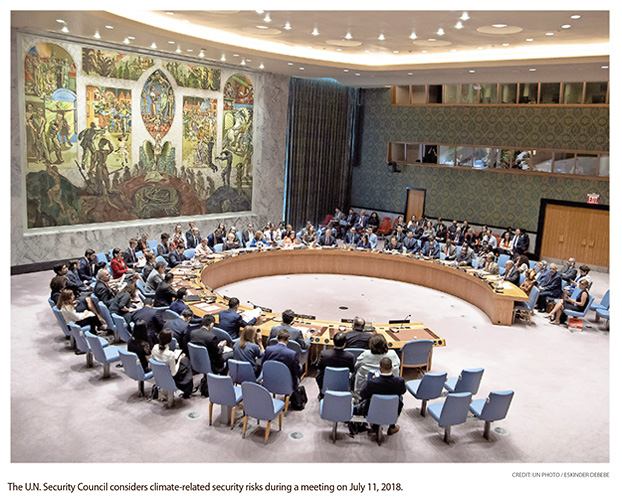 Two years from now, five nonpermanent members of the U.N. Security Council will be elected for the two-year term of 2021-22. Norway is a candidate for one of those five seats. We hope to convince the world that we are a strong one.

Why is Norway seeking membership in the U.N. Security Council? And what can we bring to the table if elected?

The Security Council is a core part of the United Nations. Acting on behalf of the U.N.’s 193 members, it is the only body with a mandate to make internationally binding decisions on issues related to the maintenance of peace and security.

Only the Security Council can authorize the use of military force and sanctions in the name of the global community. The decisions of the council often have far-reaching consequences for many people.

Norway is seeking membership on the council to promote multilateral cooperation based on international law as a foundation for global solutions. A rules-based multilateral world order has been important for Norway’s own security and economic growth for seven decades. We believe that strong, shared mechanisms for international cooperation are in everybody’s interest.

Conflict combined with a lack of economic opportunities for large numbers of people is a recipe for a vicious circle toward more poverty, more violence and more human suffering. Norway is engaged and contributes substantially to efforts through the U.N. and other institutions to end or prevent conflict, promote sustainable development and meet humanitarian needs.

As a member of the Security Council, Norway would, in particular, focus on equal rights and the importance of including both men and women in efforts to create lasting peace, reconciliation and economic development. We would highlight security issues related to climate change and the links between security and sustainable development. And we would support initiatives for sustainable oceans and forests.

We would also strive to make the Security Council more transparent, efficient and representative.

More than 1 percent of Norway’s national income is spent on development aid, and we are one of the largest financial contributors to the U.N. We do so because we believe that preventing or solving conflict, combined with social and economic development, is key to reducing poverty and mitigating large-scale migration.

Throughout the years, Norway has played a prominent role as a trusted facilitator in several international peace processes, including in the Middle East, the Philippines and Colombia. Our experience from these processes would be a contribution to the work of the Security Council.

Over the years, tensions have often run high in the Security Council chamber. Meetings may last until the early hours. In such situations, the rest of us should take some comfort in the fact that at least the chairs are comfortable and the room functional. The chamber was furnished and decorated by Norway, right down to the tapestry and drapes. It was initially presented to the U.N. in 1952 as a gift. Five years ago, a full renovation and technological upgrade of the chamber was undertaken.

We see the gift as a symbol of our longstanding commitment to the United Nations. Now we ask to use one of these chairs for ourselves.

As a member of the Security Council, Norway would do what we always do well: promote what we believe in, while at the same time listen to others and seek to reconcile positions. In doing so, we build on networks and good relations with partners — traditional ones as well as others, large and small — and work in a consistent and predictable way to achieve agreed solutions, for a common future.