The International Women’s Media Foundation recently released Reporta, a free app designed to help journalists check in and send alerts from dangerous hotspots around the world.

Several years ago, on a month-long journey through Indonesia, I got into what I thought was a taxi. After three hours driving in the wrong direction, with a driver who answered my questions simply with a yes or a no, I had the very real, very frightening thought: No one knows where I am.

I ultimately arrived safely at my destination, but that experience stayed with me as my field reporting increasingly took me to unstable regions of the world. Since then, wherever I go and whatever I’m covering, I make sure that someone knows where I am and what to do if I don’t return.

This lesson was brought home last year when I was a fellow with the International Women’s Media Foundation’s (IWMF) reporting program in the Democratic Republic of Congo. All of their fellows receive four days’ worth of “hostile environments” training with Global Journalist Security — in my case, in Uganda — as part of the IWMF’s commitment to training journalists in security practices.

But the organization has gone a step further, and in late September released Reporta, a free app designed to help journalists check in and send alerts on their iPhone and Android devices when in dangerous situations or hotspots. The app allows journalists to provide information on their location and status; alert contacts about their safety; and send an emergency message via an SOS feature.

While Reporta was welcomed by many in the journalism community, the digital security community immediately raised concerns about whether the app designed to keep journalists from harm might paradoxically endanger them. Because IWMF hadn’t immediately released the app’s code — meaning it was closed source, rather than open source, and therefore not open to outside review — and because the app used Google Analytics to report on where journalists were triggering it, Reporta’s technical integrity was repeatedly questioned.

Critics pointed out that the app was insecure and could be vulnerable to hackers, and that Reporta’s own privacy policy allowed it to collect a large amount of information that in theory could be handed over to corrupt governments.

Despite the red flags, there have been no reports of journalists being harmed or at risk in the field as a result of the app malfunctioning.

“The criticism came as a result of an abundance of caution, which we appreciate,” Elisa Lees Muñoz, executive director of the Washington-based IWMF told us. “When we built the app, we thought it would be useful to the journalism community to collect as much information as possible as to the incidents that were taking place in the field. We built the database so we could collect the information scrubbed of personal information and to report on incidents around the world. 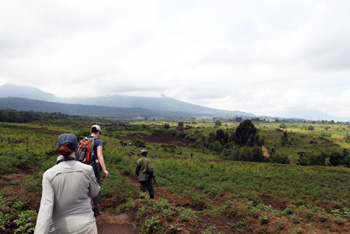 The author Molly McCluskey tours the Democratic Republic of Congo during a reporting fellowship.

“Some people in the digital privacy community had concerns about the retention of that information. We agreed that the value of the research was outweighed by the need for privacy.”

As a result, Muñoz said her group has stripped Google Analytics from the app and changed the database to ensure that only information needed for the app to function is collected, and that nothing is stored on IWMF servers. They’ve also revised the user services agreement, which initially mimicked a standard, albeit corporate, template. And they’ve released the code publicly for review and feedback.

Muñoz expects the changes to be implemented by the time this article goes to press and said the organization will continually enhance the app.

“It’s a digital product that’s going to have its evolution and it’s one we want to work on and improve with the help of the security community, the journalism community and anyone who wants to work with us in an inclusive manner,” she said. 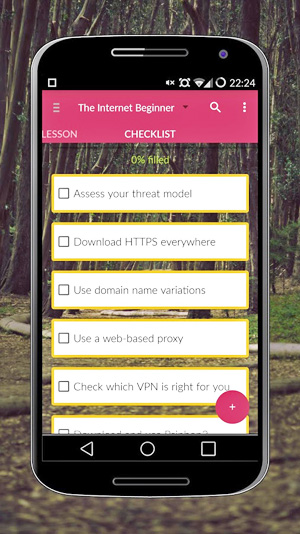 Umbrella, from London-based
Security First, is an app that offers journalists and human rights activists a comprehensive field guide to digital security.

Reporta is one of two mobile-phone apps that seek to bolster journalists’ security. Whereas Reporta acts like a portable SOS, with automatic alerts and check-in reminders, Umbrella, from London-based Security First, attempts to offer a more comprehensive field guide to digital security. The free new app, which is also intended for human rights activists, offers practical advice on issues such as how to make a secure phone call or protect files, how to spot surveillance and what to do if you’re arrested.

“When we built Umbrella, we had in mind the example of Glenn Greenwald meeting Edward Snowden,” Rory Byrne, co-founder and CEO of Security First, said, referring to the journalist who helped publish Snowden’s leaks about NSA surveillance.

“Initially Snowden tried to make contact but Greenwald found the process of digital security too cumbersome and awkward. Also, when Greenwald went to Hong Kong, he knew little or nothing about physical security. We wanted to change that. We wanted to make it easy to have everything a journalist like Glenn Greenwald would need to do to meet a source in their pocket — everything from sending a secure email to meeting a source in a high-risk location where they may be under physical surveillance from a regime that may threaten their vital work.”

Umbrella offers customized lessons and tools on issues like sending secure data to responding to threats. It also provides a dashboard with feeds from NGOs and government agencies to keep correspondents in the field updated on various security risks.

“We wanted to build a simple, easily accessible tool that brought together digital and physical security, and helped human rights activists implement it in a really user-friendly way,” said Byrne. “We’re basically building the tool we wish we had ourselves.”

While both apps may be useful on the ground, they should be used in conjunction with, not instead of, a comprehensive security plan that includes risk assessment and emergency preparedness.

Molly McCluskey (@MollyEMcCluskey) is a contributing writer for The Washington Diplomat and a former IWMF Fellow.