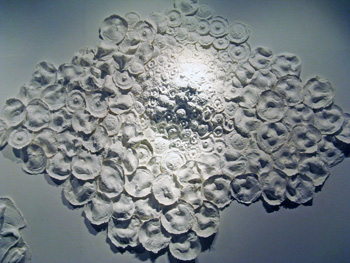 Artist Rimer Cardillo of Uruguay approaches the issue of ecological destruction from a rather novel and somewhat morbid perspective, using plaster and clay molds of road kill. He shapes intriguing objects from plaster poured over the corpses of dead animals, specifically birds and mammals run over by highway traffic or whose habitats have been eroded by urban development.

Uruguayan artist Rimer Cardillo finds inspiration in the natural world around him, including plants, as seen in pieces such as “Anacahuita” from “The Pepper of the Poor” installation.

Drawing inspiration from the environment, Cardillo has created a diverse body of work, including photography, sculpture and installation, using everything from cicadas and plants to, yes, road kill, the results of which are currently on display at the Art Museum of the Americas.

This includes birds that accidentally kill themselves against windows. “They smash themselves against a window and break their neck,” the artist said. “I make molds about those birds — the sources I use and metaphor that I use is a reflection of a landscape that’s not true.”

“This subject matter is harsh, but the work is aesthetically beautiful,” said Andrés Navia, director of the Art Museum of the Americas, part of the Organization of American States (OAS).

Cardillo specializes not only in unorthodox subject matter, but he also employs a variety of unusual techniques. His so-called “nests” consist of soft paper pulp that is hand pressed into plaster or clay molds cast directly from collected plant specimen or found animal remains. Representing different species of plants and insects, the exhibit also includes Cardillo’s uncolored wooden boxes that hold prints made from a complex combination of etching, aquatint, mezzotint, engraving and embossing.

Karl Willers, curator of the exhibit and director of the Nassau County Museum of Art in New York, calls Cardillo’s technical skills “amazing” and says it is rare to find an artist who works in every printing medium.

Much of Cardillo’s oeuvre conveys his concerns about the loss of habitats for indigenous people, flora and fauna around the world.

“This exhibit is built around issues of environment and conservation,” Willers said. “This is a particularly wonderful project happening at OAS. It encapsulates the great reach of his artwork and the deterioration of the environment and loss of species diversity.” 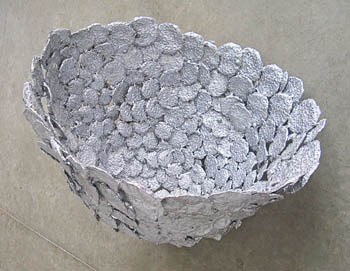 “Geranium” from the “Carapaces Series”

Navia added that the Art Museum of the Americas views the exhibition as a celebration of the artist’s contributions to the culture of the region. “We see it as an opportunity to highlight our institution’s history of working with him, which dates back to the 1990s,” he said.

Among other things, Cardillo has been praised for his journalistic explorations of the Amazonian interior, the rural estancias of northern Uruguay and southern Paraguay, as well as other remote regions of the South American continent.

Navia also mentioned that the local diplomatic community would be interested in Cardillo for embodying a generation of artists who “developed coded visual languages to protest conditions created by the turbulent period of Latin American dictatorships.”

Cardillo was born in 1944 in Montevideo, where he studied at the National School of Fine Arts. His silkscreen prints of dark, menacing cicadas and moths evoke the political turmoil and military interference that enveloped Uruguay in the 1960s and ’70s. 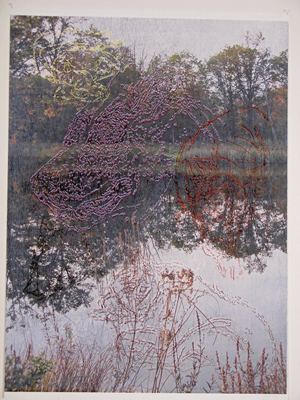 “The Estancias to the
Hudson River Valley Series”

Cardillo now works as a professor of art at SUNY-New Paltz in New York. His artwork has been featured in exhibits throughout the Americas, Africa, Europe and the Middle East, and is included in museums like the Art Institute of Chicago and the Museum of Modern Art.

After Cardillo’s exhibit, the Art Museum of the Americas will stage “(Art)xiomas,” which celebrates contemporary Cuban art and the centennial of José Gómez Sicre, the museum’s founding director.

This May, in fact, the halls of the OAS will be more eclectic than ever. On the one hand, it is showcasing Cardillo’s plasters of bird corpses and gothic insects. On the other, the venue is hosting this year’s Opera Ball, the Washington National Opera’s widely anticipated annual fundraiser. The glittering black-tie event, to be held May 21, will celebrate the WNO’s 60th anniversary season and the company’s first-ever presentation of Richard Wagner’s epic “The Ring of the Nibelung.”

Michael Solomon, senior press representative, said that this year the Washington National Opera wished to try something new. “With the Opera Ball falling on the last weekend of our ‘Ring Cycle,’ the capstone of our 60th anniversary season, we thought why not have the Opera Ball on one of the off nights of that weekend, with people traveling in to see what we’re all about,” he said.

Solomon praised the staff at the OAS, calling it an amazing and iconic building in D.C. The Kennedy Center plans to create a variety of eye-catching displays throughout the OAS headquarters, with photographs and costumes from the WNO’s rich history dating back to 1956.