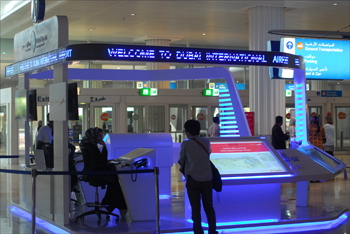 The advertisement — some would say scare tactic — goes on to describe how the oil-rich states of Qatar and the United Arab Emirates have subsidized their national air carriers to the tune of $42 billion since 2004, giving them an unfair edge and threatening the livelihoods of thousands of U.S. airline employees in the process.

Americans for Fair Skies, which paid for the radio spots, has a similar ad campaign running in newspapers, TV and online. But the Gulf carriers are hitting back with their own PR blitz, one of which is called “Keep the Skies Open.” They argue that the perennially troubled American carriers are simply being out-competed, accusing them of protectionism. In addition to offering customers superior service, Gulf carriers say they have positioned themselves to better serve the burgeoning market of travelers from emerging economies. They also point out that they contribute significant jobs and money to the American economy — and major U.S. corporations like Boeing back up their claims.

Passengers use an information booth at the Emirates terminal of Dubai International Airport, which in 2014 surpassed London’s Heathrow as the world’s busiest airport for international arrivals and departures.

But Americans for Fair Skies, a nonprofit coalition, says the opposite is true. Its president, Capt. Lee Moak, says it’s time to “level the playing field” and stop letting the two wealthy monarchies abuse the open-skies agreements they signed long ago with the U.S. Department of Transportation.

“In carrying out their dramatic and subsidized expansion, the UAE and Qatar have turned Open Skies on its head and violated both its letter and spirit,” said Moak, a former Delta Air Lines pilot. “Instead of letting the market determine prices, frequencies and routes, the Gulf airlines rely on their governments’ subsidies and largesse to compete unfairly, including their expansion into markets that would not otherwise be accessible through fair market-based competition, rendering U.S. airlines and their employees a mere regional jet service for the Gulf carriers’ massive global network.”

Open-skies agreements are a bedrock of global aviation, increasing market access while lowering airfares. Since 1992, the Transportation Department has negotiated some 111 open-skies agreements with foreign governments. These agreements have long been embraced by America’s airline industry — until the supersonic growth of Persian Gulf airlines spooked the legacy U.S. carriers.

The three airlines financing Moak’s campaign are American, United and Delta, while its targets are three hugely profitable Gulf-based carriers: Etihad Airways, based in Abu Dhabi; Qatar Airways, headquartered in the Qatari capital of Doha; and Emirates, based in Dubai — which in addition to boasting the world’s tallest building can now claim to have the world’s busiest international airport.

All three Gulf carriers serve Dulles with nonstop flights, though the vast majority of passengers originating at Dulles aren’t traveling to the UAE or Qatar as a final destination; rather they’re flying to India, Pakistan, Bangladesh and points beyond.

The Gulf carriers have been successful in tapping into the growing market of middle-class travelers from countries in Asia, Africa and the Middle East — in part thanks to sheer geography. But the three airlines have also penetrated the all-important U.S. market.

In May for example, Qatar Airways announced it would begin nonstop service from Doha to Atlanta, Boston and Los Angeles in 2016. In business just over 20 years, Qatar Airways has grown into a mega-airline flying 156 aircraft to 146 destinations around the world, including Abu Dhabi, Dubai, Hong Kong, Mumbai, New Delhi, Singapore and Jakarta — all with excellent connections from U.S. cities.

But Qatar’s inroads have threatened the long-haul business of Delta, American and United, which are accusing Qatar of bankrolling its national airline. The tiny monarchy, one of the world’s richest countries on a per-capita basis, is already embroiled in controversy over allegations that it bribed corrupt FIFA officials to select the burning hot desert emirate to host the 2022 Soccer World Cup.

The three U.S. airlines have written a letter to the secretaries of state, commerce and transportation expressing dismay that Qatar Airways, along with Emirates and Etihad, have been allowed to add new U.S. destinations to their route maps despite an ongoing investigation into the three airlines.

“These aggressive actions make requesting a freeze pending resolution even more urgent, because with every new U.S. flight, the Gulf carriers not only harm U.S. airlines and workers but also make reaching a negotiated solution more difficult,” said the letter, whose sentiments are shared by two European carriers, KLM Royal Dutch Airlines and Lufthansa.

But the main accusation lobbed by Americans for Fair Skies — that the Gulf carriers receive unfair government subsidies in the form of airport fee exemptions, loans with no repayment obligation and other generous perks — is a dicey one to prove. Many airlines, U.S. ones included, receive some form of support from the state. After the 9/11 attacks, for instance, Washington essentially kept U.S. carriers afloat with a multibillion-dollar bailout.

Etihad insists that “investing in success is not a crime,” especially in an industry that has such high entry costs and slim profit margins. Last year, Etihad, founded in 2003, carried 14.8 million passengers.

“Etihad Airways has received investment from its shareholder, the government of Abu Dhabi, in the form of equity capital and shareholder loans. We have always been clear about that,” said the airline’s president and CEO, James Hogan, in a recent speech in London. “Our shareholder may be national but when it comes to money, it is very, very rational,” he added, noting that Abu Dhabi demanded that the airline become profitable within a decade.

“The dark clouds of protectionism are gathering over Europe and the United States,” Hogan said. “Five mega-carriers are trying to pull the ladder up after years of having it their way. The people that will really lose if these giant legacy airlines are successful are the millions of travelers benefitting from new choice in the global air travel market.”

On that note, the Gulf carriers insist they are simply offering consumers a better way to travel. Indeed, all three have consistently garnered accolades for their service, comfort and style. In contrast, the legacy U.S. carriers have become renowned for lowering standards and squeezing customers while ramping up prices and reaping impressive profits.

Ronen Paldi is the owner of Ya’lla Tours USA, an Oregon-based agency that brings foreign tourists to Abu Dhabi, Bahrain, Dubai, Oman and other Middle East destinations. He agrees the subsidy argument is nonsense.

“Emirates, which we mostly use for our traffic to the Gulf region and beyond, is a top airline with excellent service. They bring back the meaning of service — both when we deal with them in the U.S. and certainly while on board. That’s why they are so successful,” Paldi told The Diplomat.

“The U.S. carriers have lost touch, so when they have a viable alternative, consumers will go where they are treated like royalty. Instead of looking what they have done wrong and Emirates is doing right, the U.S. carriers blame others.”