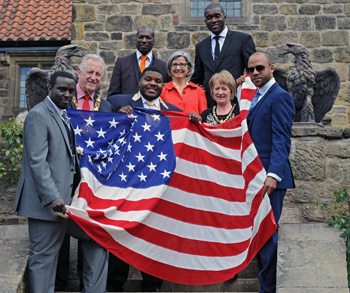 Sunderland Mayor Stuart Porthouse, second from left, and his wife Marie, second from right, join the doo-wop band the Drifters and Donna Scarboro of George Washington University at last year’s July 4th ceremony at Washington Old Hall in the British city of Sunderland, an annual celebration of the close links between Sunderland and D.C.

The mayor stands to speak about the meaning of freedom; students from John F. Kennedy and George Washington Primary Schools perform; a member of the youth parliament recites portions of the Declaration of Independence; and the 1950s doo-wop band the Drifters leads the crowd singing the Star-Spangled Banner as a flag bearing the U.S. stars and stripes is raised. It sounds like the typical small-town America celebration of July 4th and our independence from England.

What made this celebration unique was that it took place at Washington Old Hall in Sunderland, a port city on the northeast coast of England about three hours north of London. Yes, the event was tinged with a bit of irony, but there are important reasons why an English city might celebrate America’s independence from England.

Washington Old Hall is located in Washington, a small historic village in the incorporated city limits of Sunderland. It is a stately stone manor house, the center of which features a splendid paneled hall portion of the original medieval home of George Washington’s direct ancestors, and it is from here that the family took their surname of “Washington” at the end of the 12th century. It is surrounded by a lovely garden and orchard and beyond its walls lays a quiet residential neighborhood. Outside its front door waves a flag that looks suspiciously like the D.C. flag, with its white background, two red strips and three red stars. It represents the Washington family crest, denoting that the property was the ancestral home of George Washington, the rebel general who fought the British and became America’s founding father.

Because of this connection, Sunderland signed a Friendship Agreement with Washington, D.C., in 2006 as the only sister city that isn’t a nation’s capital (D.C. has sister-city partnerships with 14 other capitals). Several projects have moved forward as the two cities continue to find ways to work together. However, the July 4th flag-raising ceremony at Washington Old Hall sparks special interest each year.

In 2014, Donna Scarboro, associate provost for international programs at the George Washington University, served as the special guest to raise the flag. This year, Jon Gann, a local filmmaker and CEO of the DC Shorts Film Festival, was on hand to do the honors. Sunderland is launching its own short film festival and through a grant from the D.C. Commission on the Arts and Humanities, Gann has been advising the Sunderland team on all aspects of creating, marketing and producing the project. Founded in 2003, the DC Shorts Film Festival has grown to be the largest short film event on the East Coast. In 2014, it received over 1,200 entries from 51 nations and played 135 films over 11 days to a combined audience of more than 9,300 people. 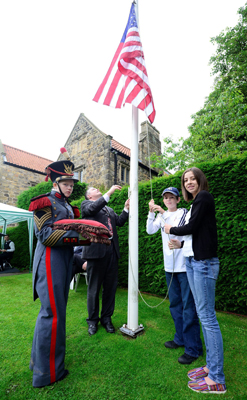 From left, Washington School pupil Louise Trainor, Nick Dolan from the National Trust and Americans Luke and Holly Whitehead from Pennsylvania raise the stars and stripes during the July 4th Independence Day celebration in Sunderland.

Another aspect of the D.C.-Sunderland Sister City Partnership can be seen at Washington Old Hall. The staircase and liberty room contain an incredible collection of George Washington memorabilia commemorating the life and achievements of America’s first president, including a fan that belonged to his wife Martha and a handwritten letter by George Washington. This permanent collection was inspired by conversations with the D.C. Archives and a temporary loan from Clarence Davies’s personal collection of Washington’s writings. A special area of interest is the history of slavery and its impact on D.C. Sunderland school children have learned about Black History Month and emancipation stories through educational programs and a free digital resource created with support from Sunderland’s Library Services to share Sunderland’s own black history stories.

This past winter, members of the Sunderland sister city team also visited with curators at D.C.’s Tudor Place to begin discussions about future exchanges that could benefit both museums and their collections. With an inheritance from George Washington, Thomas and Martha Custis Peter (Martha Washington’s granddaughter) purchased eight and a half acres of farmland in present-day Georgetown and completed their home in 1816. One of America’s first National Historic Landmarks, Tudor Place is today known not only for its stately home, but also for its gardens and extensive art collection related to the first family.

History, economic development and the arts all come together in these exchanges. While Sunderland was once a thriving port city, it was also a key hub for glassmaking in England. As part of its current economic development program, the National Glass Centre was developed on the former site of the J.L. Thompson and Sons shipyard along the River Wear. Operated by the University of Sunderland, it includes studios for a growing number of local glass artists, educational courses and a museum. Sunderland glass artists have been involved with various D.C. collaborations, including Artomatic and Pepco Edison Gallery exhibits, while glass artists from D.C. have traveled to Sunderland to learn and share their craft, enriching artists on both sides of the pond.

“Our city is very proud of our Friendship Agreement with Washington, D.C., which takes our unique historical connection and sets out to create opportunities for bringing very real benefits for both of our communities,” said Councillor Paul Watson, leader of the Sunderland City Council. “The Independence Day celebrations in Washington [U.K.] each year help us to celebrate some of the very positive things that we have been doing with our friends and colleagues in America.”

Linda Harper is the former CEO of Cultural Tourism DC and a former volunteer with the Office of Protocol and International Affairs at the D.C. Office of the Secretary. She currently serves as board chair of the DC Arts and Humanities Education Collaborative.