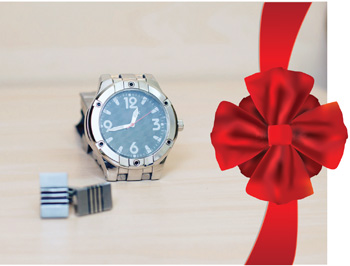 Imagine receiving a diamond-and-emerald jewelry set or a gem-encrusted sword and not being able to keep them. That’s just part of the job for the president of the United States.

Each year, the first couple (along with a long roster of U.S. government officials) receives millions of dollars of swag, all of which they can accept on behalf of the country, but not of themselves. The main — and obvious — reason for this is to avoid the possibility or even appearance of bribery. This notion was so objectionable that America’s founding fathers wrote it into the U.S. Constitution.

Honest Abe — President Abraham Lincoln — followed the rules when, in 1862, he graciously declined the offer of elephants to be used in the Civil War from the King of Siam.

Watches, cufflinks and jewelry are common gifts given by foreign governments to U.S. officials, who can only keep gifts if they purchase them at fair market value.

But as time went on and America gained power, the number and value of the gifts being offered grew. Today, presidents may receive thousands of gifts each year. So laws were put in place to alleviate Congress of the burden the Constitution set forth, the most recent being the Foreign Gifts and Decorations Act of 1966. It limits the value of a gift the president may accept without congressional involvement. Since January 2014, that limit has been $375. For comparison, the maximum value during the Reagan administration was $180.

If a gift’s value is greater than $375 and the recipient wants to keep it, they can pay fair market value for it. The same principle that goes for Obama goes for federal employees as well, who are bound by rules set by the Foreign Gifts and Decorations Act.

The General Services Administration (GSA) Foreign Gifts and Decorations Officer is responsible for determining the fate of a gift. Typically, it goes to the National Archives and Records Administration or presidential libraries, but recipients can ask to use them for official use. (One notable example of a gift put to good use is the ornate carved wooden desk that Queen Victoria of England gave to President Rutherford B. Hayes in 1880 — you know, the famous Resolute desk that the president uses in the Oval Office.)

Perishable goods are “handled pursuant to United States Secret Service policy.” While that policy is not spelled out, Bloomberg notes that government guidelines say foodstuffs and similar items “may, with approval, be given to charity, shared with the office or destroyed” (though it would be a shame to destroy those expensive bottles of French wine).

Recipients can also purchase the gift from the GSA, as Stephanie Williams, former deputy chief of mission of the U.S. Embassy in Bahrain, apparently did with a set of pearl earrings valued at $1,000 in January 2013. So did Acting Assistant Secretary of State Thomas Kelly, when he purchased a “traditional sword with belt,” worth an estimated $580, that was given to him by the Yemeni defense minister. Deputy Chief of Protocol Mark Walsh, meanwhile, bought a black Traser watch worth over $500 that was given to him by King Abdullah II of Jordan.

Each year, the State Department’s Federal Register publishes a detailed list of gifts, including their recipients, givers, values and destinations.

“The way it works in practice is gifts that are given to the president, all are turned over to the GSA and the GSA takes possession of them on behalf of the federal government,” said Lawrence Dunham, former assistant chief of protocol at State for 16 years and current senior associate at Protocol Partners, a protocol consulting, staffing, training and operations firm. “They become federal government property. And then when the president leaves office, they are displayed in the presidential library.”

The government established a chief of protocol in 1928 to assist with gift receiving, among other diplomatic tasks. Today, the Office of Government Ethics oversees gifting rules, and the Gift Unit within State’s Office of Protocol serves as the processing point for gifts received by executive branch employees from foreign officials. The unit is also responsible for selecting gifts the president and other officials give to foreign dignitaries.

Despite the strict rules and many government entities involved in gifting, the practice is crucial to international relations.

“It [has] real tremendous potential, this gift-giving ceremonial thing that we do, to forge relationships,” said Pamela Eyring, president of the Protocol School of Washington. “It can help forge a relationship, it could ease tensions maybe between leaders, heads of state, and it could be also to say thank you for being such a great ally. So it’s very important to give gifts.”

It’s the Thought that Counts

Gifts come in all shapes and sizes. There are plenty of cufflinks and bottles of wine (and cognac) to go around. But a lot of thought goes into gifts to make them representative of the country giving them and/or of the relationship between the governments. Here are some examples:

Other times, the gifts represent a show of wealth. For instance, that diamond-and-emerald set — earrings, necklace, ring and bracelet — was given in 2014 to Michelle Obama by the late Saudi King Abdullah bin Abdulaziz Al-Saud and was valued at $560,000. He gave the Obamas’ daughters jewelry valued at $80,000. There was also a gold-plated brass replica of the Makkah Clock Tower estimated to be worth $57,000. In fact, the Saudi king’s gifts to the Obamas totaled about $1.3 million that year. 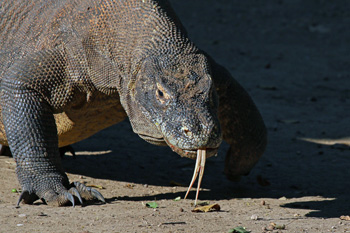 In 1990, President George H.W. Bush received a Komodo dragon from the president of Indonesia (he donated it to the Cincinnati Zoo and Botanical Garden).

Sometimes, the gifts can simply seem odd. Here are examples of those, too:

• In 2012, Obama received from Colombian President Juan Manuel Santos “a silver figure representing an oversized coffee bean.” Along with a book, the gift was valued at $942.84.

• In 2011, Australia’s Northern Territory Chief Minister Paul Henderson gave Obama a $50,000 policy that would cover him in case he was attacked by a crocodile.

• In 2014, not to be outdone in the vanity department, Britain’s Prince William gave Obama a signed portrait of himself valued at $888.

• In 2010, Singapore’s prime minister, Lee Hsien Loong, and his wife gave Obama an MP3 player and “uGoGo electronic pulse massager,” for a total value of $550.

• In 1990, George H.W. Bush received a Komodo dragon from the president of Indonesia and donated it to the Cincinnati Zoo and Botanical Garden, where it died in 2007.

Gifts run the gamut from bizarre to banal, practical to pricey. Here are a few other recent highlights:

• In 2014, the sultan of Brunei gave Obama a gift basket of eclectic trinkets, including an automatic tea infuser in the shape of a penguin, 12 scented votive candles, a cheese tray made of walnut, a deep purple snakeskin storage trunk and the book “People You’d Like to Know” featuring photos of legendary American musicians.

• The late Saudi King Abdullah seemed to be partial to the Bulgari line of Italian luxury items, giving Bulgari watches to various U.S. officials, including a men’s watch valued at nearly $20,000 to Jonathan Finer, deputy chief of staff to Secretary of State John Kerry, in 2014.

• In 2014, Malaysia’s prime minister gave the president a framed portrait of Obama woven in songket fabric, a stamp collection and six booklets about Islam. Other Malaysian goodies that year included a bronze tone-covered album of photos showing Obama’s visit to the country in 2014, as well as a 20-inch sword with a grip made of polished wood carved in the shape of water fowl and held in a sheath of gemstone-encrusted gold and silver.

• President Obama received a slew of commemorative mementos and wardrobe items from Indian Prime Minister Narendra Modi, including digital recordings of civil rights leader Martin Luther King Jr. and his wife Coretta visiting India; a variety of fabrics, paintings and books, including a special-edition copy of “Bhagavad Gita According to Gandhi”; a purple dress with small gems and a multicolored embroidery of peacocks, flowers and vines; and a tan tunic with matching drawstring pants.

• Sens. Tim Kaine (D-Md.) and Angus King (I-Maine) each received a 98 million-year-old fish fossil from Ziad Hawat, the mayor of the Lebanese city of Byblos. The fossil was valued at $400.

It’s not news to foreign officials that generosity comes at a price — in this case, strict rules to accepting gifts.

“Foreign governments know what the rules are, and they know what the exceptions are, too,” Dunham said. “The president doesn’t tell you, ‘Thanks, but no thanks.'”

What’s more, the United States is not alone in its restrictions on gifting. Many other countries, including England, have similar rules. 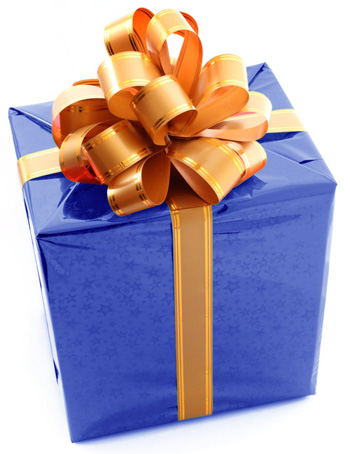 “I think you’ll find that a lot more countries now are putting rules on gifts because of ethics and bribery, so where maybe before they were very relaxed about giving gifts and especially receiving gifts, now we’re finding that gift giving is being controlled,” Eyring said. “There are some [countries] that have no rules at all.”

And just as they receive gifts, U.S. presidents and officials always give them when they meet with foreign leaders. The State Department’s gift officer typically handles the selection. The job is politically appointed to reflect the taste of the president and first lady, Dunham said, and the officer works closely with the first couple on choosing the right item.

Generally, Dunham said, two types of gifts are selected: something personal that reflects the interest of the couple receiving it or something that’s the same for every recipient. In the latter case, it can be an engraved piece of silver from an American company such as Tiffany or crystal by an American manufacturer like Steuben Glass.

“These gifts should be unique and match the level of the relationship we have with that country,” Eyring said. “They have to be culturally sensitive. We don’t give alcohol traditionally as a gift. We watch the colors of the wrapping or the colors of the gift. The most important consideration is to make a connection with the country or the person.”

Both Eyring and Dunham recalled a gift that President Bill Clinton gave to South African President Nelson Mandela. After former Chief of Protocol Mary Mel French and her team found out that Mandela was a boxing fan, they collected personalized letters to the iconic anti-apartheid leader from all the living U.S. boxing champions and put them in a beautiful leather-bound book with an inscription from the president. “That gift really meant something to Mandela,” Eyring said.

Despite every effort to the contrary, blunders do occur. For instance, in 2009, then-Secretary of State Hillary Clinton gave Russian Foreign Minister Sergey Lavrov a “reset” button that was intended to show a diplomatic starting over. But the word on the red button was misspelled. Instead of reading “perezagruzka,” or reset, it read “peregruzka,” or overcharged or overloaded.

Both leaders handled the blunder with ease and understanding, and Clinton promised to correct the mistake and send a new one. If she wins the White House in November, she’ll have four more years to find the perfect present.