Home The Washington Diplomat May 2016 U.K.-Based Outfit Attempts to Fill Black Hole of Information in Syria 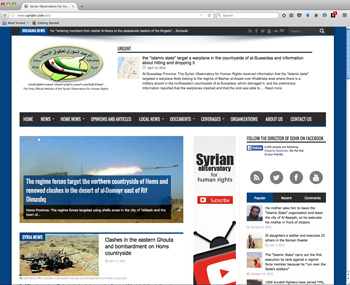 Information about the Syrian civil war, now in its sixth year, remains elusive. Even the death count is a mystery. The figure that has been ubiquitously quoted is 250,000 (the last number given by the United Nations before it stopped counting), though a Syrian research center announced that the death toll has likely surpassed 470,000. With data so hard to come by, the Syrian Observatory for Human Rights has proved an invaluable tool for the media and Syria experts.

The small British-based NGO provides a wealth of details about the murky conflict on a near-daily basis. It documents the war’s death and destruction in graphic photos on its Facebook page. In one day in April, its website ran a litany of reports on the latest airstrikes, car bombings, clashes and casualties throughout Syria.

For example, the Syrian Observatory for Human Rights (SOHR) claimed that the recent Russian air offensive in Syria had killed 5,081 people since last September — 40 percent of them civilians. It noted that warplanes in Al-Raqqah province had killed 24 members of the Islamic State in mid-April. It even said the Islamic State set up loudspeakers telling the remaining 15,000 residents of Palmyra to flee before the regime’s advance on the ancient city.

Another recent example is the alleged death of Islamic State commander Abu Omar al-Shishani by an American airstrike. Reuters ran a story on March 10 that quoted SOHR’s claim that al-Shishani wasn’t dead but seriously injured.

“The Syrian Observatory for Human Rights said on Thursday that Islamic State’s military commander was badly wounded but still alive, appearing to contradict U.S. officials who said he was likely killed in a U.S. air strike,” Reuters reported, despite not being able to independently verify the claim. U.S. officials later told CNN that al-Shishani had in fact been injured in the airstrike and subsequently died, though they wouldn’t reveal how they knew about his death.

Quoted by a variety of outlets, SOHR is run by Rami Abdulrahman, born Osama Suleiman. He manages the entire operation from his home in Coventry, England, where he’s lived since fleeing Syria in 2000 after fearing arrest by the regime. In 2006, he started SOHR and when the Syrian civil war began in 2011, he focused his full efforts on tracking violations. Answering a slew of phone calls each day, Abdulrahman keeps SOHR ticking almost singlehandedly.

Abdulrahman doesn’t work alone. The New York Times reported that he has confidants in Syria who gather reports from a large network of over 200 activists. Some of these activists have been killed during the war, according to Abdulrahman, and many work in the shadows to avoid the ire of the various warring actors. He also has a colleague translate the reports and post them on Facebook in English.

“Using the simplest, cheapest Internet technology available, Mr. Abdul Rahman spends virtually every waking minute tracking the war in Syria, disseminating bursts of information about the fighting and the death toll,” Neil MacFarquhar of the New York Times wrote in a profile of Abdulrahman in 2013. “What began as sporadic, rudimentary e-mails about protests early in the uprising has swelled into a torrent of statistics and details.”

The Syrian civil war started in 2011 after the government brutally repressed peaceful demonstrations. Protesters picked up arms and formed rebel battalions that led to enough chaos that a constellation of foreign governments and extremist groups entered the fray.

Syria became increasingly dangerous for the international media. Journalists like James Foley and Steven Sotloff were captured by the Islamic State and beheaded in gruesome videos broadcast to the public. Syria was listed as the deadliest country in the world for journalists in 2015 by the Committee to Protect Journalists. The intensity and divisiveness of the Syrian war, as well as the regime’s role in controlling media, means that it is also difficult for local journalists to report on the conflict from more than one angle. In their stead, Abdulrahman now collects casualty counts from his group of activists and supplies it to the international media. His work has taken on added importance as experts try to collect evidence to establish possible charges of war crimes in the future.

While SOHR is an indispensable resource, it is far from infallible in the eyes of many.

Speaking to The Washington Diplomat, two Syria experts — with differing political leanings — said SOHR’s figures must be taken with a grain of salt. A dearth of information coming out of Syria, however, means that experts continue to rely on Abdulrahman for casualty counts and on-the-ground reports, even though there’s no way to validate the group’s claims.

“All sides in the conflict accuse him of bias, and even he acknowledges that the truth can be elusive on Syria’s tangled and bitter battlefields,” the New York Times reported, noting that Abdulrahman has been accused of working for everyone from the Muslim Brotherhood to the CIA to Syrian President Bashar al-Assad’s exiled uncle.

Of all his critics, the Syrian regime has probably been his biggest detractor. “Assad’s government says he is lying and its powerful propaganda machine has unleashed a campaign against Abdulrahman on Syrian state television,” Reuters reported in 2012. “Assad supporters have publicly threatened to kill him.”

Abdulrahman’s history with the Syrian regime and his comments to international media do show his resentment toward Assad (he founded SOHR to draw attention to jailed activists inside Syria).

“The truth will make people aware,” Abdulrahman told the New York Times. “Hearing the number of people killed every day will make them ask the government, ‘Where are you taking us?’”

Aside from death threats and accusations of bias, SOHR has came under attack from fellow Syrian activists. Mousab Azzawi is a Syrian pathologist who set up a rival observatory in London several years ago and tried to discredit Abdulrahman’s work.

“I agree that unifying powers of human rights activists is better,” Azzawi told Reuters in 2012. “[But] if I can’t trust my colleague … why waste my time?”

Russian government-funded media outlet RT reported that Azzawi was a former translator for Abdulrahman’s SOHR but was fired after calling for foreign intervention in Syria. Azzawi’s human rights monitoring site did not count the death of Syrian soldiers among its casualties.

Azzawi’s name, however, has since fallen into obscurity as Abdulrahman’s Syrian Observatory seems to have withstood the test of time — even if not entirely unscathed.

Until journalists, both local and foreign, are able to move freely around Syria and report on the latest events in the war-ravaged country, expect SOHR to continue appearing in a plethora of media reports.