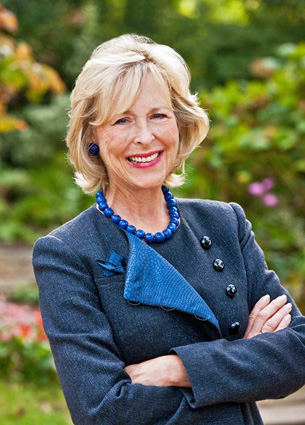 From the time she was able to help her father, a funeral director, straighten chairs, Lynda Webster was planning events. Today she runs the 20-year-old Webster Group, an event planning firm whose portfolio includes more than 600 events, some of which have been attended by ambassadors, foreign heads of state, U.S. presidents, military leaders, government officials and executives of Fortune 500 companies.

Webster, the wife of former FBI and CIA Director William Webster, got her professional start at the Willard InterContinental Washington hotel and also worked in marketing at the Watergate and the Four Seasons in Boston. Her shift to event planning came when the father of Queen Noor of Jordan asked her to handle an event by the nonprofit Save the Children. Since then, she has produced shows with Hollywood entertainers, events with the United Nations and been involved with the National Cherry Blossom Festival. Her biggest event to date was the 2006 dedication of the Air Force Memorial, which 43,000 people attended.

Here, Webster shares what she’s learned from her experiences and offers tips for handling affairs of any size.

As the wife of a former CIA and FBI director, you must have attended a fair share of events. How did being on that side of it help you when you started your company?

It gave me a tremendous amount of perspective. I saw a lot of events. I saw well-run events. What we say at the Webster Group is: “How would the White House do it?” I mean, our standards are that high, because I saw how the White House did it, I saw how the CIA and State Department did some of the finest events ever run in our city. But I also got to attend a lot of events that were not very well run by other organizations. I thought, “Wait a minute. These could be run a lot better, much tighter.”

What was wrong with them?

For example, a lot of Washington events have, in my view, way too much talking, and I have this little saying that my staff makes fun of from time to time: I think, “The last great speech was given in Gettysburg 150 years ago, and it was two and a half minutes long.” I try to get our clients to think about how to get their message across in a compelling way that doesn’t involve eight speakers because the chances are out of eight speakers, you might have one good one. 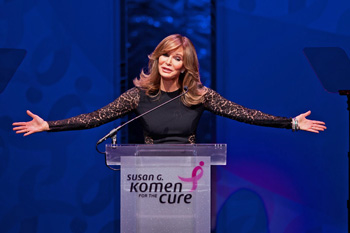 Actress Jaclyn Smith talks to the audience at the Susan G. Komen for the Cure Honoring the Promise Gala.

What should someone look for in an event planner?

I would first and foremost make certain especially that they understand money because events are big business these days, especially if you’re dealing with thousands of people. They’re expensive to do and if they’re not done well, you could certainly lose money. Make certain that the company has a good track record for managing the budget. I would also make certain that they really think long and hard about the various goals of the event. You don’t want somebody who just cares about the tablecloths. I think this is something that is overlooked, but look for somebody who is nice to work with. It’s nice to make certain that people are congenial and represent you well.

What personal characteristics does an event planner need to succeed?

Patience. A lot of diplomacy. Creativity helps, and I also think just thinking out of the box. We try to do things a little differently. We try to dig a little deeper. I like to say, “Anybody can order tablecloths and chairs” — I mean, that’s such a small part of what we do. We like to start off by asking our clients, “What are your goals for the event? What are two or three different things you want to accomplish?” We all know you want to have a successful event, but what does that really mean, and a lot of clients have never thought about that. 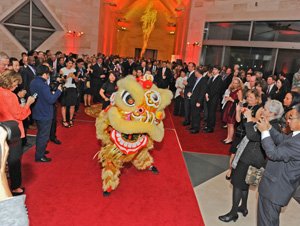 A dragon graces the Points of Light Gala at the Chinese Embassy.

I think event planning in D.C. is fabulous because there are just so many things going on. I think we’re the most exciting city in the country right now in terms of people who are doing a variety of things. We have people doing medicine, we have people doing foreign affairs — every imaginable subject matter, so it’s not boring. Some cities might be oil towns, like Houston, or a banking town, so a lot of the events are similar, whereas in Washington, the events are so varied; people from literally all over the world are coming to Washington.

Working in conjunction with embassies is fun because it’s always interesting to say, “What’s important to you?” We want them to feel like we’re not just barging in and trying to show them how we would do it. We like to say, “What would make the event special to you?” to show them it’s their event, it’s their home, it’s their country. When we go to an embassy, we’re going to a foreign country, so we need to respect that and try to make the event something that they would be proud of. Trying to make it personal to them is what makes an embassy event special.

How do you make it personal?

My philosophy is no matter how big the event, it should be an event not unlike what you would do at home. For example, if my husband and I are entertaining, one of us always greets our guests warmly, we help them with their coats and we bring them cocktails, and when they are leaving we thank them for coming and say goodbye. There’s no reason for an event for 43,000 people you can’t do the same. 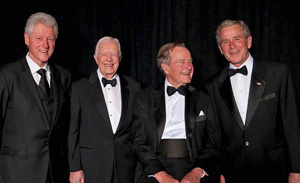 What are some mistakes embassies make in planning events?

It’s a mistake that everybody makes, not just embassies. Sometimes they don’t think about their audiences as well as they should. Some people just don’t mix well. A lot of people don’t think about the guest list well enough. Try to make certain that everybody invited probably will fit in together well. You don’t want people to stand around and not have anything in common with each other.

What elements of event planning are the same regardless of who’s putting on the event?

The same thing happens whether it’s a funeral or an event for 43,000 in terms of budget. You need to develop an accurate budget, you need to put together a timeline. We are anal about having a very detailed timeline. We want to make certain our events are on time and on schedule and on budget. The timeline is what helps us plan the event, so that if we are six months out, three months out, two months out, we have a game plan, sort of a playbook. The actual day of the event we have what we call a minute-to-minute, and that minute-to-minute schedule is literally minute-to-minute: what is involved in making the event happen. For example, setup, the caterers arrive, the food arrives, the salads are set, the gong goes off and the crowd’s moved in. Whether it’s a board meeting for 15 or an event for 40,000, each event has that minute-to-minute.

What tips do you have for planning events on a budget?

I believe that every dollar that I save a client goes into their mission, so we teach our staff to negotiate. We always get two to three bids for everything. We have caterers we use a lot, we have florists we like, we have suppliers for tablecloths and chairs, but we don’t just use the same people. We get bids from two or three of them because we want them to give us their best price so that our clients get the price. 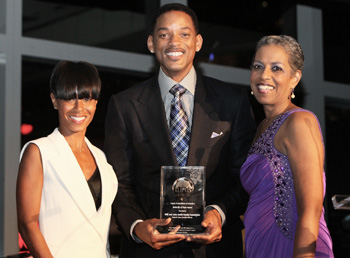 Actors Jada and Will Smith, left, receive the Butterfly of Hope Award from the Lupus Foundation of America.

What are some venues you love for hosting events in the D.C. area?

We do a lot of government work, and their budgets aren’t as strong so we use a lot of hotels that are a little more budget-oriented. We use the Hiltons and the Hyatts — those business-oriented hotels. The fundraisers tend to go to the Four Seasons or the Mandarin or the Ritz-Carlton [which] we use a lot. It can seat a lot of people and they still have a cachet about them. Then we go outside the hotels. Probably our favorite venue is the [Andrew W. Mellon Auditorium] just because you can have a lot of people there and the venue is so beautiful, you don’t hardly need to spend a dime on decor. We love working with the National Building Museum. It’s probably the biggest venue inside that we use because it could seat 1,200.

What’s your dream event? The one you’d love to throw?

I would love to be part of the Super Bowl. I would love to help on the Olympics, and I think we’ve got the talent to do it now. Ten years ago I wouldn’t have said we could do it, but I really think we could. I’ve never worked on either one of the conventions. I’m a flaming independent myself so I probably wouldn’t have a shot. They may lean on Republicans or Democrats.

What are your favorite types of events to attend?

I love the embassy events because they tend to be smaller. I came to Washington wanting to work for the CIA and travel and live abroad and my degree is in international business, so I personally have a very strong interest in the diplomatic world. One of the things that I think is starting to slide a little bit in our society because we are so connected to our networks, our digital lives, is that personal experience, and I think diplomats represent the importance of connecting humans. That’s why I think embassies are extremely important in our town because at the end of the day, people have to trust and respect each other if they’re going to work together.