Home The Washington Diplomat April 2015 Fit for Life: The Best Thing You Can Do to Live Longer 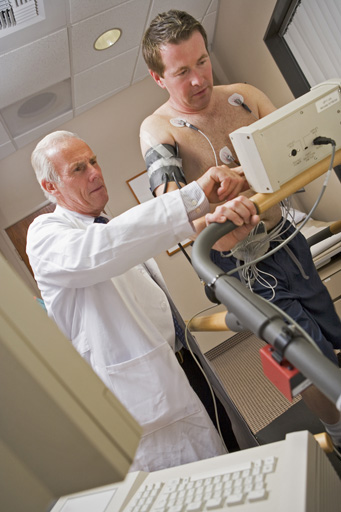 If you aren’t already convinced that regular exercise is one of the best things for just about every aspect of your health, maybe two new studies can help make the case.

In early March, Johns Hopkins researchers reported that they’ve developed a new formula that estimates how likely you are to die over the next decade — based strictly on your ability to exercise on a treadmill at an increasing speed and incline.

That isn’t all that new. Cardiologists have been using treadmill-based stress tests to measure short-term risk of death for years, but primarily in people with known heart disease or cardiac symptoms, and usually accompanied by other kinds of testing. But the new test from Hopkins, which they call the FIT Treadmill Score, can predict long-term death risk in anybody, whether or not they have current heart symptoms, based strictly on how they handle it when the speed is cranked up from 3.5 to 6 or 7 and the incline ramps up from 0.0 to 5 percent or 10 percent.

The FIT Treadmill Score factors in the peak heart rate each person reaches during intense exercise, as well as a measure of how much energy the body is expending during exercise, a measure known as metabolic equivalents, or METs.

“We hope the score will become a mainstay in cardiologists’ and primary clinicians’ offices as a meaningful way to illustrate risk among those who undergo cardiac stress testing and propel people with poor results to become more physically active,” said senior study author Dr. Michael Blaha, director of clinical research at the Johns Hopkins Ciccarone Center for the Prevention of Heart Disease.

The study team dug through data on nearly 60,000 people in a wide age range — from 18 to 96 — who underwent standard exercise stress tests, and then tracked how many of the participants at each fitness level died from any cause over the next decade. Fitness level, as measured by peak heart rate and METs, was the single strongest predictor of death risk.

Exercise also keeps your brain healthier longer, says another new study — this one from researchers at Boston University and published in the Journals of Gerontology in December. They found that older adults who are physically fit have better memory and “executive function” skills (problem-solving, planning, organization) than adults who are out of shape.

The study compared 33 young adults (18 to 31) and 28 older adults (55 to 82) with a wide range of fitness levels. Being physically fit didn’t seem to make much difference in memory or executive function for the younger people in the study, but for the older participants, the fitter they were, the better their memory, problem-solving, and decision-making skills.

This is just the latest of many studies to find that a fit body equals a fit brain.

In a study published in Frontiers in Aging Neuroscience in November 2013, a group from the Center for BrainHealth at the University of Texas found that older adults who participated in aerobic exercise for one hour at least three times per week had increased blood flow to key areas of their brain, including the hippocampus, the primary region affected by Alzheimer’s disease. They also had significant improvements in both their immediate memory (the ability to recall your grocery list right after you’ve made it) and delayed memory (the ability to remember it accurately 15 minutes later when you’re actually at the grocery store).

So if you want to not only live longer, but have a better chance at keeping your brain sharp during those extra years you’re buying yourself, get off the couch and move! Any exercise is better than no exercise at all, but most studies show that you need a good chunk of vigorous aerobic exercise — that is, something that gets your heart pumping — on a regular basis.