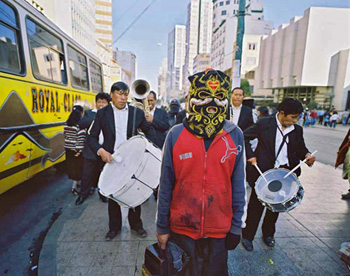 Photos: Courtesy of the artists

ASCHOY Collective’s performance documentation “The Mask of the Shoe Shiner” are among the contemporary artworks that invite viewer interaction in “The Ripple Effect: Currents of Socially Engaged Art.”

Often museum-goers are passive observers, silently contemplating works of art at a safe distance from the buffer zone established by a security alarm. But the current exhibit at the Art Museum of the Americas is anything but hands-off.

“The Ripple Effect: Currents of Socially Engaged Art,” presented in partnership with the Washington Project for the Arts, blurs the line between artistic gesture and civic engagement. The 10 featured artists address social issues that range from immigration and the environmental impact of illegal dumping, to the social stratification of Washington, D.C., and the ongoing struggle against violence in Mexico. But they do so by incorporating viewers as direct participants in the creation of their work. This outside-the-studio, exchange-based approach to creating art is known as “social practice,” a trend in contemporary art that emphasizes collaboration and dialogue with the public.

Through their work, the artists create entry points for conversation that circumvent the “for/against” dynamic typical of public discourse on controversial social issues, introducing an alternate viewpoint that allows for thoughtful reflection.

Entering the exhibit, the eye is immediately drawn to what appears to be tiny gardens floating in mid-air. In terrariums suspended from the ceiling, artist Olivier Giron has created micro-ecosystems using discarded objects found at illegal dumping grounds. Viewing waste in that context suggests the possibility of renewal and encourages reflection on solutions to excessive consumption. The terrariums correlate to a public online map — managed by the volunteer environmental group Let’s Do It VA! — on which Giron, who is based in Arlington, has geo-tagged photographs of illegal dumpsites throughout Virginia. 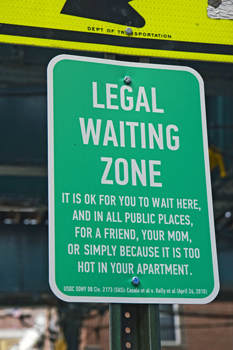 Several projects are works in progress that ask viewers to shape in their evolution. Artists Annie Albagli and Vadim Ogievetsky invite viewers to create an interactive love letter. An iPad mounted on a wall asks: “In what way is or does DC symbolize your personal paradise?” Viewers can use the iPad to respond anonymously and read what others have written. Using technology as a catalyst for engagement, the project attempts to remedy the city’s splintered demographics by creating a virtual space where the personal pleasures that individuals derive from being part of a community are reinvested in, and shared by the community as a whole.

Personal correspondence is also a feature of “Write Home Soon,” an interactive public installation by Mark Strandquist. Participants in citywide workshops were given blank postcards and asked to describe in words or pictures a place that was important to them, but to which they lost access. The participant-created postcards are on display in the museum, with blank postcards available to visitors who wish to submit their own.

“It’s not about giving voice to the voiceless. It’s not a charity project,” Strandquist said at an artist discussion in October. “It’s about redefining whose voices and whose histories our museums and public spaces reflect.”

“Write Home Soon” is an outgrowth of “absence/occupied,” a project inspired by imprints left on the ground after Occupy Wall Street protesters were evicted from McPherson Square almost a year ago. For “absence/occupied,” Strandquist installed images of the dismantled encampments on the façades of vacant buildings as a temporary memorial to a historical moment. 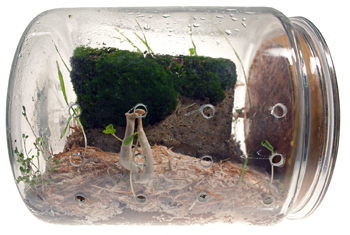 Other works in the exhibit delve into the psycho-geographic realm. Using a jacket that can be taken off and made into a tent, artist Lina Vargas De La Hoz explores the adaptability and instability of migration. Meanwhile, with its own version of the device NASA used to document the moon’s surface on the Apollo 14 mission, Floating Lab Collective created a map of D.C. by asking residents to pose questions beginning with “why?” as they walked from Mt. Pleasant to Anacostia, mapping their responses to corresponding physical locations.

A variety of public events are happening in conjunction with the exhibit, including a Dec. 4 tree-planting ceremony with Organization of the American States Secretary-General José Miguel Insulza for Pedro Reyes’s “Palas por Pistolas” project, and a workshop for “Write Home Soon” on Dec. 15 with artist Mark Strandquist.

The weekend before the presidential election, artist Miguel Luciano and a group of local undocumented youth gathered on the National Mall to fly kites depicting the children’s faces, symbolically transgressing border fences and entering the political arena to make the voices of undocumented immigrants heard.

Children will enjoy the interactive nature of the exhibit, which is intellectually provocative without being inaccessible to them. Adults, too, will find the artistic participation stimulating and — especially in the wake of a rabid political season in which both parties thought they had a monopoly on being right — they will appreciate giving their input on weighty social issues in a thoughtful, nuanced manner.