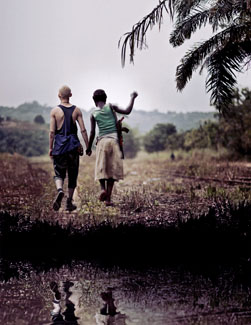 ‘The Sapphires’ and ‘Reality’ and Repertory Notes

Rachel Mwanza, right, portrays a child soldier who escapes her rebel captors along with Serge Kanyinda but cannot erase the horrors of her experience in “War Witch.”

Cinematographer Nicolas Bolduc shot the film’s beautiful images completely in the Democratic Republic of the Congo, quite a rare film shoot location. Written over 10 years, Nguyen’s script elegantly meshes violence and symbolism. As a writer and director, Nguyen avoids slipping into excessive melodrama, an easy trap with such heavy subject matter. His steady direction maintains the relative objectivity of the story and coaxes haunting, naturalistic performances from his nonprofessional cast, led by emotional performances by Rachel Mwanza and her screen partner Serge Kanyinda.

In the deft framing device utilized by “War Witch,” the pregnant 14-year-old heroine Komona (Mwanza) narrates her sad story to the unborn child she’s carrying. Flashbacks show how rebel militants nabbed 12-year-old girl Komona from her village, conscripting her into a horrific life as a child soldier waging war in the African bush, where she must both face and commit acts of unimaginable cruelty. To start, she’s compelled at gunpoint to shoot her own mother and father to avoid a worse fate, being forced to watch the guerrillas cut her parents to pieces with machetes. Komona is brainwashed into accepting her AK-47 as her new mother and father.

When Komona is given “magic milk” from tree sap, she begins to see visions of the dead. After she escapes a battle as the sole survivor from her village, her fellow soldiers believe she has powers of sorcery. She meets Great Tiger, the rebel leader, who appoints her his “war witch” to spread her good luck to comrades. She also grows close to Magicien (Kanyinda), an albino boy soldier with a comparable title. Komona and Magicien manage to escape the rebels — yet she finds it is not so easy to banish her ghosts and leave them behind. 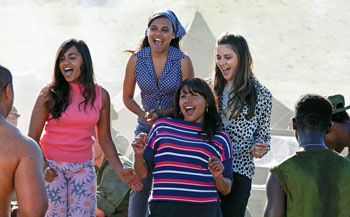 Australian filmmaker Wayne Blair’s lively first feature, “The Sapphires,” makes for a rather impressive directorial debut. His irreverent musical is quite the crowd pleaser, and Blair’s spirited direction keeps the action and laughs coming at a brisk pace. The ensemble cast members also deliver uniformly humorous performances, led by familiar Irish actor Chris O’Dowd (“Bridesmaids,” “The IT Crowd”) in a tour-de-force, zany portrayal of an alcoholic, accidental band manager.

Cinematographer Warwick Thornton’s sparkling photography brightens the screen with a palette full of oversaturated hues, while the audience’s ears are pleased with a 1960s soul soundtrack featuring solid renditions of songs made famous by the Four Tops, Marvin Gaye, Otis Redding and the like.

Collaborating with Keith Thompson, Aboriginal actor-writer Tony Briggs adapted his own play into a breezy but serviceable movie script full of crisp, lively dialogue. His story is based on the real-life experiences of his mother and three aunts. In 1969, their Aboriginal female soul quartet made the unlikely venture beyond a rural outpost in Australia, a country still deeply filled with institutional racism against Aboriginals, to tour Vietnam and entertain American service members.

Deep in the Outback, as a bus passes by two Aboriginal sisters, Gail (Deborah Mailman) complains, “It’s because we’re black!” Her sister Cynthia (Miranda Tapsell) retorts, “No, stupid. It’s because we’re ugly.” Gail and Cynthia enter a talent contest in a local pub, where their mellifluous performance easily outshines their competition, but they’re stiffed by the bigoted jury.

However, Irish master of ceremonies Dave (O’Dowd) likes what he hears. Perhaps in part because his brain is muddled by booze, he decides to tackle the unlikely job of transforming the country and western duo into a soul girl group, managing to overcome Gail’s fiery reticence. As he quips, “Ninety percent of all recorded music is shit. The other 10 percent is soul.” They add talented teenage sister Julie (Jessica Mauboy), desperate to escape her overbearing parents, and befuddled half-breed cousin Kay (Shari Sebbens) to the roster.

Julie leverages her stronger voice and striking looks to take over as lead singer from Gail. While on tour in Vietnam, a big shot agent sets Julie’s sights on greener pastures. Meanwhile, Dave and Gail start to fall for each other despite their mutual doubts and constant bickering. And the rest is history. 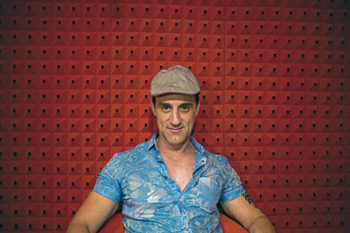 If you are Italian director Matteo Garrone, how do you follow up 2008’s hyper-realistic, ultraviolent mob caper “Gomorrah?” His international sensation exposed Mafia links to Italian politicians, an act of bravery that led many in Italy to revere him, but the ensuing threats on his life required him to get a round-the-clock security detail for protection.

“Reality” opens with a garish, highly choreographed wedding that combines elements of realism and Fellini-esque surrealism. Patriarch Luciano (Aniello Arena, in a remarkable first-time performance) is receiving thick, macabre makeup for his amateur, mediocre performance as a drag queen for the guests’ entertainment. But he’s upended by the paid appearance of dull, arrogant Enzo (Raffaele Ferrante), an alumnus of the blockbuster Italian reality television hit “Big Brother” (“Grande Fratello”), who flies out of the party in a helicopter like a president or billionaire. Enzo’s celebrity excites the wedding guests, shocking Luciano, who thinks he is no less talented than Enzo, a belief with some validity.

A charming Neapolitan fishmonger, Luciano ekes out a living selling fish from his stand. On the side, he dredges up small-time cons, sometimes aided by his wife Maria (Loredana Simioli). His gregarious nature leads him to constantly showboat for his customers and many family members. So his daughters encourage Luciano to audition for “Big Brother” at the local shopping center. He accepts, hoping to escalate his local celebrity into the big leagues of Enzo, which he expects will completely transform his life.

But Luciano’s obsession with becoming famous leads him to forsake his family in favor of ever-escalating stunts intended to please the judges. He progresses through the auditions, culminating in a final round at the legendary Cinecittà Studios in Rome, made famous by director Federico Fellini, where he believes he will claim the prize that he deserves.

“Reality” won the Jury Prize at the 2012 Cannes Film Festival. Arena’s performance received rave reviews, but the debut actor had to miss the premiere and the accolades. Back in the real world, it turns out that Arena is serving a long prison sentence for a double murder. He was given a work pass to leave the prison to shoot his scenes, but he had to return to prison at the end of each day. Perhaps life is stranger than fiction.


The “2013 Korean Film Festival DC” (through April 21) concludes at the Freer Gallery of Art, the AFI Silver Theatre and the Angelika Film Center Mosaic, with support of the Embassy of the Republic of Korea and the Korean Cultural Center DC.

The Angelika Mosaic offers a final look at the 10th anniversary screening of Park Chan-wook’s “Oldboy.”


Corinna Belz’s documentary “Gerhard Richter Painting” (Thu., April 4, 8 p.m.) was created while the octogenarian master was preparing works for his 2011-12 retrospective and interweaves scenes of the artist at work, archival footage and interviews.


Presented in conjunction with the National Gallery of Art’s exhibition “Albrecht Dürer: Master Drawings, Watercolors, and Prints from the Albertina,” Lorena Baines, museum educator at the National Gallery, introduces East German director Bernhard Stefan’s film “Jörg Ratgeb, Painter” (Mon., April 8, 6:30 p.m.), which recounts German painter Jörg Ratgeb’s political awakening to the cause of peasants during a visit to his artistic idol Dürer in 1517.