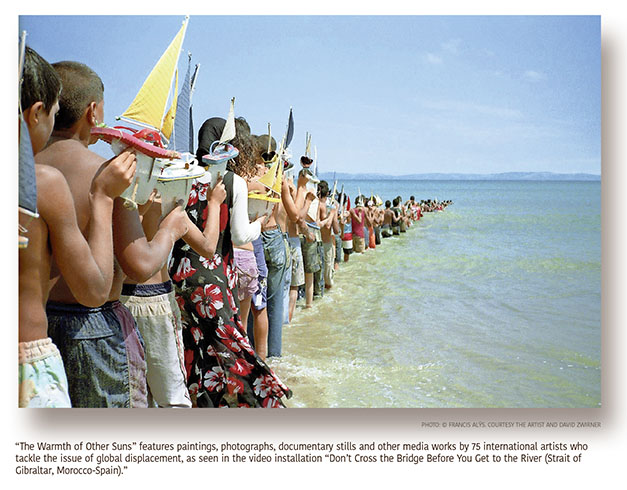 Searing, demanding and infused with empathy, “The Warmth of Other Suns: Stories of Global Displacement” is an exhibition that should not be missed before it leaves Washington on Sept. 22.

The show at the Phillips Collection is strikingly ambitious, covering three floors of gallery space, sweeping across time and place as it explores the refugee and immigrant experience. Organized jointly by the Phillips Collection and the New Museum in New York, “The Warmth of Other Suns” takes its name from a line by author Richard Wright that is also the title of Isabel Wilkerson’s essential book on the Great Migration, which refers to the movement of 6 million African Americans from rural southern U.S. to other parts of the country in the first half of the 20th century.

In paintings, videos, photographs, neon art, graphic novel pages, found objects and documentary stills ripped from YouTube, the 75 international artists included in the exhibition grapple with an array of mediums and personal stories. Artists from the U.S. — along with countries such as Bangladesh, Belgium, Brazil, Egypt, Ghana, Iraq, Mexico, Syria, Turkey, Vietnam and others — reflect on migration both from a historical perspective and through the prism of today’s global refugee crisis.

The show’s discordant nature — each floor is a vivid, jarring mix of styles, materials, artists and time periods — is an incredibly effective choice for an exhibition on displacement.

“That’s also very intentional. We wanted it to have this feeling, partly because that’s the kind of saturation we live with, with the media around us when we deal with a subject that is so current and so in the news. We’re bombarded with images about migration a lot of the time, and we wanted the exhibition to have a similar kind of intensity and feel to it,” co-curator Natalie Bell, associate curator at the New Museum, told The Washington Diplomat.

It’s near impossible not to feel that intensity after leaving the extraordinary video installation by British artist John Akomfrah, “Vertigo Sea,” on the first floor. A meditative, enigmatic three-screen experience that fuses spectacular images, archival material and fiction to explore the transatlantic slave trade, the whaling industry and the current refugee crisis, the piece is a disorienting, beautiful start to the show. Time fades in and out, dissolving over 48 minutes and sending viewers back into the exhibition both deeply receptive and unsettled.

“I wanted to achieve the feeling that once you entered the exhibition, you are somehow transported elsewhere. If you wanted to stay there five hours, six hours, then it becomes almost a world unto itself,” said co-curator Massimiliano Gioni, the artistic director at the New Museum. “Not that that experience in any way resembles the experience that some of the works talk about, but I do want a viewer to feel elsewhere.”

Iconic, familiar D.C. holdings — the Phillips Collection’s “Migration Series” by Jacob Lawrence and the Rothko Room, as well as the National Gallery of Art’s “The Artist and His Mother” by Arshile Gorky — are placed into a new, profound context, exploring the nature of displacement as essential to the American experience. The mix of historical and contemporary art, and the way they enter into conversation with each other within the Phillips’s walls, is a hallmark of this exhibition. 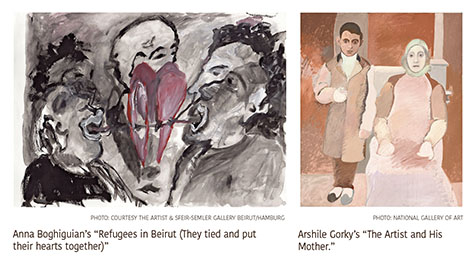 Gioni, who also organized a 2017 exhibition in Milan focused on migration in the Mediterranean Sea region that evolved into this Phillips Collection show, said “The Warmth of Other Suns” offers a reading of modern and contemporary art as “a phenomenon created by migrants, in a sense.”

“The history of contemporary art was founded on a utopian art of a community of peers who could find themselves beyond the borders of nations, speaking a common language. There was not a language of words, but a language of images, a language of sounds, a language that was universal and as such could reach beyond borders,” he said.

“Nowadays, it can seem romantic, it can seem idealistic, maybe naïve, but I think in a moment in which nationalism returns with a force that we are witnessing, this idea of exchange and dialogue across nations through a common language is maybe the base of not only diplomacy, but of coexistence and the base to imagine a different future,” Gioni added.

Much of the contemporary work throughout the show offers a commentary on the role of the media. The press, largely, doesn’t appear in the rosiest light, with a pretty broad indictment of how the media represents — and exploits — the refugee and migrant experience. It’s most notable, and fascinating, in British artist Phil Collins’s “how to make a refugee,” a short video on Kosovo War refugees and the journalists who are there to edit the scene to fit their purposes. A child’s wounds are all that matter, and his re-traumatization as he reveals his scars means little in the face of getting the perfect shot.

This show is at its best when it makes the political deeply personal, showing the way policy transforms lives on individual and mass scales. This is especially relevant given the anti-immigration climate on both sides of the Atlantic and the fact that 65 million people are currently displaced around the world. But the exhibition makes a clear effort to put the narrative focus on the people caught up by the decisions of those in power who are normally placed at the center of the story.

The ideas of personal testimony and witnessing, and the question of how images and objects work in service of memory and memorialization, are key cornerstones to the show’s thematic approach, Bell said.

“One thing that we really wanted to insist on is that yes, people may read politics into the show — I think it would be impossible not to at this moment in time — but our goal was really to make it a humanitarian show, not a political show,” Bell explained. “Maybe to some people it would sound political to say such a thing. But it’s really about telling human stories and about artists being able to tell their own stories, in many ways.”

That approach is embodied on the top floor, where viewers encounter the quietly shattering installation of second-hand clothing by French artist Kader Attia. “La Mer Morte (The Dead Sea)” features clothing — sweatshirts, pants, shoes — scattered over the gallery’s floor in cascading layers of blue. The feeling of absence, of the people who may have once worn those clothes, is a profound reminder of the personal hardships behind the headlines.

The Warmth of Other Suns: Stories of Global Displacement