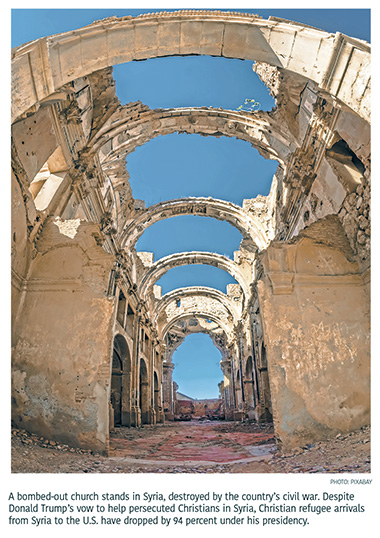 The United States admits more Christian refugees than Muslim ones every year, yet most white evangelical Christians are opposed to letting them into the country.

The Trump administration — particularly Vice President Mike Pence, an evangelical Christian himself — has made the plight of persecuted Christians overseas a key plank of its religious freedom agenda. Trump’s initial travel ban on mostly Muslim-majority nations, for example, included an exemption for Christians. In his speeches, Secretary of State Mike Pompeo regularly places a greater emphasis on the repression faced by Christians over other religious groups, such as Rohingya Muslims. The State Department even labeled the Islamic State’s targeting of Christians as “genocide.”

Critics say this increased focus on Christians has come at the expense of other religious groups, namely Muslims, and is part of an effort to appease Trump’s far-right Christian base.

Yet opinion polls in 2018 have found that white evangelicals are markedly more opposed to refugee admissions than other Christians are, despite the fact that most evangelical leaders ostensibly support welcoming refugees as part of the core Christian ethos of helping the less fortunate.

Experts speculate that some evangelicals may not be aware that the U.S. is currently admitting far more Christians than it does Muslims, or they may not understand the distinction between refugees, who represent a small fraction of overall immigration to the U.S., versus other types of immigrants.

The anti-refugee sentiment may also have as much to do with politics as it does with religion. White evangelicals overwhelmingly tend to be Republican and their politics on most issues closely aligns with the GOP Party.

Evangelicals in particular have been strong supporters of Trump. (The president won four-fifths of the votes of white evangelical Christians.) This loyalty has not wavered despite the myriad controversies surrounding the president that seemingly contradict fundamental evangelical values, from Trump’s widely publicized infidelities to his unabashed materialism. In fact, a PRRI survey last April found evangelical support for Trump at an all-time high, with 75 percent holding a favorable view of the president.

In September, Trump announced he would further cut admissions to no more than 30,000 in fiscal 2019, down from last year’s limit of 45,000 (of whom only 22,000 had been admitted as of Oct. 31). The administration cited the backlog of over 300,000 pending asylum cases as a reason for the 2019 cap, which marks the lowest ceiling since the resettlement program formally began in 1980.

For Christian refugees, the picture is mixed. On the one hand, arrivals are down dramatically because Christians have been caught in Trump’s wider crackdown on immigration. On the other, Christians are taking a larger share of refugee admissions than their Muslim counterparts.

Ironically, despite the administration’s rhetoric on helping persecuted Christians, Trump’s refugee cuts have slashed the number of Christian refugees accepted into the U.S. by 64 percent compared to the final months of the Obama administration, according to an Oct. 3 report by the libertarian Cato Institute.

Both Trump and Pence have been especially vocal about the persecution Christians face in the Middle East. On the campaign trail, Trump pledged to help Christians in Syria. At a May 2017 conference, Pence decried that “nowhere is this onslaught against our faith more evident than in the very ancient land where Christianity was born.”

Yet Christian refugee arrivals from Syria alone have dropped by 94 percent, while those from Iraq have plunged by 99 percent. 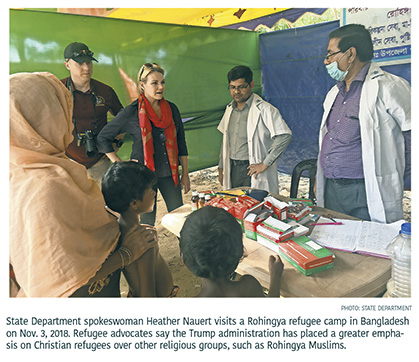 But Muslims have been hit harder by the cuts, with overall Muslim refugee arrivals down by 93 percent, according to Cato. Christians are also increasingly edging out Muslims for the dwindling number of slots available each year.

In 2016, Obama’s last year as president, the U.S. admitted about 16,700 Muslim refugees and about 17,000 Christian ones, according to the State Department. In 2017, Trump’s first year in office, those numbers fell to about 5,240 and 5,460, respectively. In fiscal 2018, which ended Sept. 30, the number of admissions fell to its lowest level since 1977, and the disparity between Muslim and Christian admissions ballooned. About 3,495 Muslims were granted refugee status, compared with 15,318 Christians.

“While refugees of nearly every religious group are impacted by the overall decline in refugee admissions, it certainly seems that Muslims have been particularly singled out,” Matthew Soerens, U.S. director of church mobilization for World Relief, said in an Oct. 2 article for Christianity Today, noting that other religious minorities such as Jews and Yazidis have been shut out as well.

With a few exceptions, rank-and-file evangelicals’ hostility toward refugee admissions isn’t shared by their leaders.

About 500 conservative evangelical pastors signed a letter in February 2017 asking Trump to reconsider his plan to dramatically reduce refugee admissions.

“As Christians, we have a historic call expressed over two thousand years, to serve the suffering. We cannot abandon this call now,” the letter said.

One of those who did not sign the letter was Franklin Graham, head of the Billy Graham Evangelistic Association. He supported Trump’s effort to ban Muslim immigration to the United States, saying it was “not a Bible issue.”

In a January 2017 interview with the Huffington Post, Graham said, “It’s not a biblical command for the country to let everyone in who wants to come, that’s not a Bible issue. We want to love people, we want to be kind to people, we want to be considerate, but we have a country and a country should have order and there are laws that relate to immigration and I think we should follow those laws. Because of the dangers we see today in this world, we need to be very careful.”

“People don’t understand who refugees are, who are coming here,” said Galen Carey, vice president of government relations at that National Association of Evangelicals. He said there had been a lot of “misinformation” disseminated about refugees, some of it “designed to invoke fear,” and “that has a lot of people concerned about their security and way of life.”

The vetting process can take as long as two years and involves multiple U.S. law enforcement and intelligence agencies. Almost half of those who apply for refugee status are turned down, according to the State Department. The majority of those who are accepted are women and children.

William Canny, executive director of the U.S. Conference of Catholic Bishops’ Migration and Refugee Services, said only a small number of refugees is admitted for resettlement in the U.S. each year.

“There are some 22 million people [worldwide] with refugee status currently,” he said. “Only a little over a million are deemed as needing resettlement” by the U.N. High Commissioner for Refugees, and “only about 150,000 actually get resettled in any given year…. Historically, the U.S. has taken about half of that 150,000. Now we’re taking many fewer.” 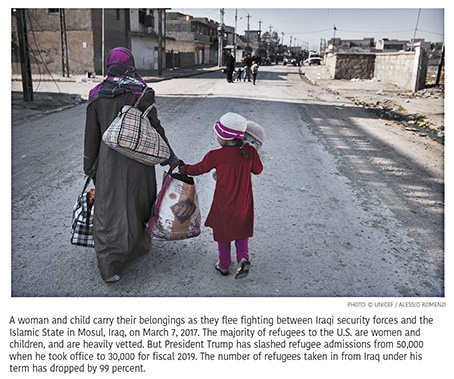 Another factor is that many Americans, not just evangelicals, don’t know what the word “refugee” means.

“Under the Refugee Act of 1980, a person is a refugee if they are unable or unwilling to return to their country of origin because they have suffered or fear they will suffer persecution based on nationality, race, religion, political opinion, or membership in a particular social group,” according to Refugee Council USA.

Since that law took effect, about 3 million refugees have been resettled in the United States. However, “no refugee resettled to the United States under the current refugee program has committed a deadly terrorist attack,” said Elizabeth Foydel, deputy policy director for the International Refugee Assistance Project in New York.

Moreover, a 2016 study by the Cato Institute found that the chance of an American being killed in a terrorist attack carried out by a refugee in any given year was 1 in 3.64 billion.

Like Carey of the National Association of Evangelicals, Foydel said there was “a very disturbing popular narrative about what a refugee is.” There are frequent claims that they are “a security threat or terrorists.”

She said there was also “a pervasive narrative about people coming to take American jobs,” when in fact, “refugees are an asset to the American economy. They put more into it than they take out.”

Until now, Foydel said, refugee admissions were not a political issue. She said the Obama administration had welcomed refugees to the U.S., and so had the Reagan and George H.W. Bush administrations.

Trump has claimed, without evidence, that the migrant caravan en route from Central America to the United States included “many criminals” and “unknown Middle Easterners.”

Rev. Pat Robertson’s Christian Broadcasting Network reported on Oct. 25 that there were “felons” and “exotics” in the caravan. CBN defined an exotic as someone from outside Latin America. CBN also claimed that the caravan was organized and funded by “radical leftists.”

Carey said the National Association of Evangelicals (NAE) was trying to counter the hostility and misinformation that mainstream white evangelicals have about refugees.

“We’ve done a number of things to educate our leaders, so they will also educate their followers,” he said. NAE has held “events to help people understand the issues,” and, hopefully, “to take a new look at the situation.”

Canny said that for refugees, “bringing them in and offering them a new life is for these people, frankly, a miracle.”