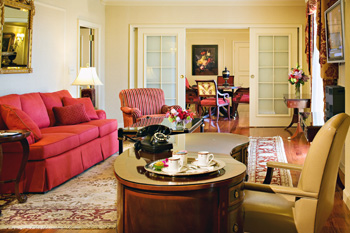 On Sept. 20, a few skips from the White House, guests of the Willard InterContinental Washington toasted with scotches and mint juleps in the hotel’s stately lobby. They were celebrating the 25th anniversary of the reopening of this landmark 12-story, Beaux-Arts property.

Don’t let that wee number — 25 — confuse you: With a history that began less than three decades after the birth of the United States itself, the Willard is practically an American institution.

The nearly-3,000-square-foot George Washington Suite, viewed from the parlor, is the latest addition to the Willard InterContinental Washington, which strives to balance preserving its historical character while offering the latest in amenities and luxury.

From the mid-1800s to 2011, the Willard had kept watch on life in the nation’s capital from its vantage point on the corner of Pennsylvania Avenue and 14th Street, NW. From the inauguration of Abraham Lincoln to the crafting of an inspirational speech by a man who “had a dream,” the hotel has witnessed some of U.S. history’s most monumental events.

“This corner has watched America and Washington grow,” said Willard general manager Jim Veil as he gazed up at the blue roof of the antique-filled lobby (from where the term lobbying famously originated). “Everything took place a few blocks from here.”

Since President Zachary Taylor’s 1849-50 administration, the Willard has hosted almost every U.S. president in some way. The hotel even served as the presidential residency in 1923 for almost a month while President Calvin Coolidge waited for President Warren Harding’s widow to move from the White House following his sudden death.

The original structures of the hotel included six adjacent two-story row houses that overlooked the distant Potomac River. The homestead passed through the hands of several owners until 1850 when Henry Willard, a steamboat steward, bought the property and combined and enlarged the buildings — christening the inn with his surname.

Around that time, the “Great Compromiser” Senator Henry Clay of Kentucky introduced his favorite bourbon-based mint julep to Washington in the Willard’s Round Robin bar, which still exists today.

But Clay was only one in a long line of famous historical figures to pass through the Willard’s regal halls.

During the late 1800s, statesmen, businessmen, ambassadors and anyone with a stake in the fledgling project that was America would visit the nation’s capital. And because the Willard sat in the heart of the city, just blocks from the White House and most government offices, many lodged at the hotel. Samuel Morse, for example, stayed there while awaiting a federal patent for his new invention, the telegraph.

But the hotel is perhaps best known for its links to key moments in the Civil War. The Willard graciously hosted the Napier Ball of 1859 to celebrate the departure of then-British Ambassador Lord Napier. More than 1,800 people attended and, according to hotel spokeswoman Barbara Bahny-David, it was the last time the North and South met on friendly terms before the Civil War broke out.

In February 1861, on the eve of war, delegates from 21 of the 34 states met at the Willard for one last desperate attempt at finding a compromise between the already-seceding Southern states and the North. Negotiations failed. 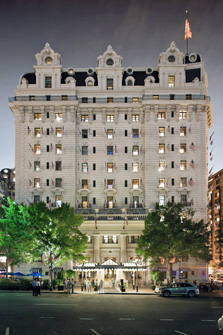 During the conflict, the Willard acted as a rendezvous spot for many various influential players. Famed American writer Nathaniel Hawthorne, while covering the Civil War for the Atlantic Monthly, wrote that “the hotel, in fact, may be much more justly called the center of Washington and the Union than either the Capitol, the White House or the State Department.”

“You exchange nods with governors of sovereign States; you elbow illustrious men, and tread on the toes of generals; you hear statesmen and orators speaking in their familiar tones,” he wrote. “You are mixed up with office seekers, wire pullers, inventors, artists, poets, prosers.”

That same month, after intercepting several assassination threats, one of Abraham Lincoln’s detectives stowed the president-elect in the Willard. Even though every room was packed to the brim with out-of-towners anticipating his inauguration, Lincoln and his family managed to stay hidden in the hotel until he was sworn in March 4.

Civil War veteran Ulysses S. Grant would also frequent the Willard after he became president a few years later. According to hotel lore, Grant would escape the White House to enjoy a cigar and brandy in the Willard lobby (coining the term lobbyist for the political wheelers and dealers who would approach him there).

It was also at the Willard where Julia Ward Howe penned “The Battle Hymn of the Republic” and where the Rev. Martin Luther King Jr. worked long into the night of Aug. 27, 1963, on his “I Have a Dream” speech before delivering his call for racial equality on the National Mall the next day.

The Willard even has a place in contemporary American pop culture. It’s been featured in scenes with Tom Cruise in the film “Minority Report” and Kevin Bacon in “Hollow Man.”

One wedding that took place at the Willard in the 1880s even inspired an opera, “The Ballad of Baby Doe.” The rags-to-riches true story of Elizabeth McCourt, “Baby Doe,” follows her life from working in a silver mine to marrying Colorado Senator Horace Tabor, who left his wife for the young bride and married her at the Willard. The community cast out the scandalous couple, and many, with the exception of then-President Chester Arthur, skipped their wedding.

Today, the Willard is a modern luxury hotel with all the latest technological trappings and upscale amenities to compete in a demanding hospitality market like Washington, D.C. It’s also at the forefront of environmental sustainability, incorporating wind power, recycling and other eco-friendly initiatives into its operations. 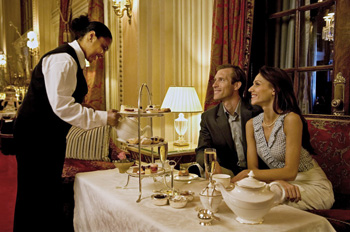 Afternoon tea is still served in the Willard’s Peacock Alley, named for the women who used to parade their 1900s fashions down the long alleyway.

As it’s moved forward though, it’s also sought to preserve the past on which its legacy was built. The property has undergone multiple physical transformations and today’s hotel is not the original structure that was popularized in the late 1800s. It was actually rebuilt as Washington’s first skyscraper in 1901, expanded in the 1920s, and closed and nearly demolished in 1968. But thanks to the foresight of the Pennsylvania Avenue Development Corp and its partners, including the InterContinental Hotels Group, this architectural and historic gem was restored to its turn-of the-century splendor and reopened in 1986, which is why the hotel is toasting the 25th anniversary of that reopening.

Despite the many changes throughout its 335 guestrooms and 41 suites, the original design of the grand lobby is still there. You may not see a U.S. president sitting around casually sipping a brandy anymore, but you are still likely to run into diplomats from all over the world and hear the tongues of various foreign languages floating through that lobby.

Likewise, the Willard’s Round Robin bar is still known for serving Clay’s strong mint julep that made the elegant watering hole famous years ago. It’s served on the rocks with a lemon peel and sugar bits for $15, and, according to one waiter, it’s a bestseller.

The Willard also regularly stages reenactments, including readings of Lincoln’s inaugural address and costume parties, such as a Kentucky Derby evening where guests don bowties and bonnets. And the hotel still serves afternoon tea in the long hallway on the first floor, Peacock Alley, named for the women who paraded around in lace and frilly attire to show off the latest fashions of the early 1900s while the men hobnobbed below.

After more than 150 years, the Willard still exudes a grandeur that echoes the history it’s worked to preserve. Even today, standing in the opulent lobby amid its commanding marble pillars, you can imagine where Grant puffed his cigar. Standing at the entrance of Peacock Ally, now draped in reds and golds, you can picture the bejeweled ladies in hoop dresses fanning themselves with feathers as they sauntered down the long hallway. The only thing you can’t picture is what the Willard will witness in the next 25 years, though it’s also sure to be memorable.