Home The Washington Diplomat November 2012 With Its Sprawling Education City, Qatar Aims to Be Knowledge Hub 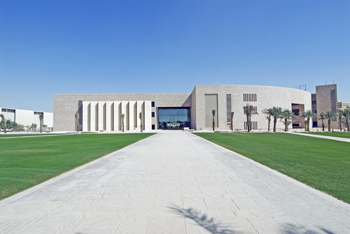 Nasser Al Khori knew he wanted an American education, but he didn’t bargain on getting it in his native Qatar. His father was educated at Seattle University and most of his classmates at the elite American School of Doha were planning to study in the United States. Al Khori was admitted to the University of Pennsylvania and was set to pack his bags for Philadelphia until he attended a presentation from Carnegie Mellon University in Doha.

“I decided to stay here because the business school at Carnegie is one of the top 10 in the world,” said Al Khori, who graduated in May and now works as a program associate at the Qatar Foundation in Doha. “And I figured I could get the same exact education right here at home as I would in the States.”

Al Khori, 21, is at the vanguard of an experiment that could be a model for how countries around the Middle East and the world invest in education. He got his degree in business administration from Carnegie Mellon’s branch campus at Doha’s Education City, a 2,500-acre complex where six American and two European universities have established branch campuses.

Carnegie Mellon University is one of six major U.S. universities that have branch campuses at Doha’s Education City, a 2,500-acre complex that seeks to make Qatar a leader in higher education throughout the region.

In 1995, Sheikh Hamad bin Khalifa Al-Thani, then 43, deposed his father in a bloodless coup while he was out of the country. That same year, he launched the Qatar Foundation, a nonprofit organization chaired by one of his three wives, Sheikha Moza bint Nasser, with the goal of “supporting Qatar on its journey from carbon economy to knowledge economy by unlocking human potential.”

That plan was laid out in a national strategy called Qatar National Vision 2030, which outlines how the country must transform itself. But is it realistic to believe that Qatar will continue to prosper long after its natural resources are gone? And will establishing an American education beachhead in the Middle East help enhance the image of the United States in the region?

A year after taking power from his father, the Emir provided seed money to help launch Al Jazeera, the groundbreaking pan-Arab satellite TV network, and tiny Qatar, with a population of just 1.8 million citizens, began to creep out of obscurity. Sheikha Moza bint Nasser, who earned a bachelor’s degree at Qatar University, felt that her country needed to invest heavily in education to help it transform into a modern society.

The Education City complex has evolved and expanded since Virginia Commonwealth University (VCU) became the first American school to open a branch campus in the country in 1998. Now more than 4,000 students, over half of them female, from Qatar and dozens of other countries are working on degrees in medicine from Cornell University, journalism from Northwestern, international relations at Georgetown, design at VCU, engineering at Texas A&M, or business and computer science at Carnegie Mellon — all right in the Education City complex on the outskirts of Doha.

The Qatar Foundation covers all of the operating expenses for these schools, so the establishment of branch campuses in Qatar is a no-risk investment opportunity for them.

The foundation doesn’t release precise financial numbers for Education City but the total amount spent is well into the billions. In helping to establish Cornell’s medical school, which graduated its first class of doctors in 2008, the foundation committed $750 million for the first 11 years.

Where does all that money come from? Once desperately poor, Qatar now has nearly 900 trillion cubic feet of proven natural gas reserves, making the country the world’s third biggest supplier, and has an annual per-capita income of more than $100,000, according to the CIA World Factbook (also see the cover profile “Qatar’s Prosperity As High As Its Geopolitical Ambitions” in the October 2012 issue of The Washington Diplomat).

University officials insist that everything about the branch campuses is exactly the same as it would be in the United States, including admissions standards and procedures, curriculum, class work and tuition. There are also the everyday trappings of American campus life: Starbucks, co-ed study get-togethers, T-shirts with school mascots.

But this being Doha, not Detroit, there are some differences. Women are not allowed to enter male dormitories, students have reciprocal privileges to attend classes at any of the universities in Education City, and many students don’t pay a dime for their education. 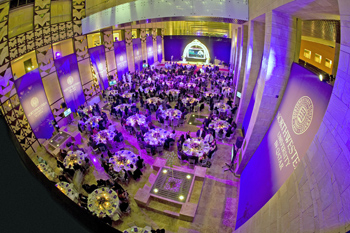 Doha’s Education City, which is home to more than 4,000 students, over half of them female, inaugurates the newest U.S. branch to join its sprawling campus: Northwestern University.

Only about 25 percent of Qatar’s residents have Qatari citizenship, as it’s difficult for the multitude of guest workers in the country to naturalize, even if they were born in Qatar. But this privileged minority has the right to attend any college or university they like, anywhere in the world, free of charge. The government even pays them a stipend to cover their expenses.

But even non-citizens of Qatar and foreigners have an opportunity to defray or completely avoid the high tuition costs. Aminah Kandar, a Canadian citizen of Lebanese descent, decided to transfer from Canada’s Carleton University in Ottawa to Georgetown’s campus in Doha in part because of the financial incentives.

“The Qatar Foundation offers interest-free loans that we don’t have to pay back until we’re employed,” she said. “You pay 15 percent of your annual salary per year, or if you work for pre-approved Qatari organizations, you can get your debt completely forgiven. And if you get at least a 3.6 GPA, your whole tuition is covered by the foundation.”

The huge investments being made in Education City might not make sense if most graduates were fleeing the country for opportunities elsewhere, but that is not the case. Qatar had the highest real GDP growth rate in the world in 2011, at 18.7 percent, and with the country set to host the FIFA World Cup in 2022, job growth and economic development are likely to remain robust.

Al Khori and Kandar report that their classmates have had no difficulty finding jobs, mostly in Qatar. Al Khori’s brother studied mechanical engineering at Texas A&M’s campus in Doha and now works for Shell, and his sister studied at Cornell’s Education City campus and is now doing a residency in radiology.

For some Qataris who return home after long residencies abroad, the country bears little resemblance to the place they left behind.

Amal Mohammed Al-Malki, an assistant professor at Carnegie Mellon’s Education City branch, said that when she left the country for the United Kingdom in 1996, women couldn’t drive and had limited rights.

“When I came back in 2003, it was a totally different country,” she said. “Women had many more rights and responsibilities. They were driving. You could see their photos published in newspapers, which was unheard of before. Women’s status had changed drastically and it was mostly thanks to the Emir’s wife, who has singlehandedly changed the way women are perceived in this society.”

Al-Malki is in a distinct minority as a Qatari professor at Education City; most instructors are American or European, and the foundation has devoted significant resources to attracting academic talent from around the world. Georgetown’s dean, Gerd Nonneman, a Belgian citizen who taught in Britain, wasn’t initially sold on the Education City concept.

“I was a skeptic,” he recalled in a recent telephone interview. “I thought this was likely a white elephant project that would be very expensive and wouldn’t really work.”

But Nonneman changed his mind after making several trips to Qatar and seeing the results of the foundation’s efforts firsthand. Then when he was offered the opportunity with Georgetown last year, he didn’t hesitate to accept. 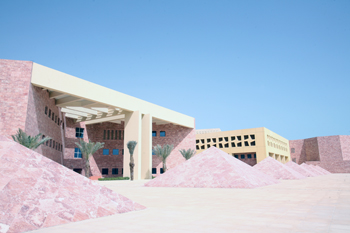 Students at Doha’s Education City work toward degrees in engineering from Texas A&M, above, medicine from Cornell, journalism from Northwestern, international relations at Georgetown, design at Virginia Commonwealth University, or business and computer science at Carnegie Mellon.

Nonneman and other faculty bring a liberal arts mentality that promotes critical thinking and open debate in what is still a conservative, albeit progressive, Islamic monarchy. So while the establishment of branch campuses modeled on a U.S.-based system may be a no-risk proposition for the six American universities that have invested in Doha, is their presence in the country likely to change how students feel about the United States? Qatar is home to America’s largest airbase in the Middle East but many ordinary citizens have an unfavorable impression of U.S. foreign policy, particularly the American stance on the Israeli-Palestinian conflict.

Al Khori says that attending a branch of an American university isn’t likely to alter a student’s perception of how the United States acts on the global stage.

“People love America and they would like to visit there, but when it comes to foreign policy, we are so aware of what is going on, especially through Al Jazeera, so I don’t think attending an American university will change our perceptions,” he said.

But Kandar thinks that both Westerners and Arabs refine their understanding of each other and the world by interacting with one another in an academic setting.

“I know some students who have changed their perceptions through meeting American professors, when maybe they hadn’t known Americans before,” she said.

America’s interests aside, some question whether the massive investments Qatar is making in education will transform the society. Allen Fromherz, an associate professor at Georgia State University and the author of “Qatar: A Modern History,” isn’t convinced that Education City will revolutionize the country.

“It’s primarily students from very elite families,” he said. “I don’t want to dismiss the good intentions of the Qatar Foundation, but if you look at the numbers and demographics, I see it as not very likely that it’s going to make the profound impact on society that’s been promised.

“The question is not whether or not the project is having a positive impact in terms of opportunities for cross cultural interaction and the advancement of knowledge in the region. In that regional respect, Education city is certainly a valuable and significant project,” Fromherz said. “But it should be emphasized that the establishment of these universities are not a panacea for Qatar’s unique demographic political and historical challenges: These must ultimately be addressed by substantial political and social reforms.”

He added: “A lot of what is done in Qatar is for an external audience and to increase the prestige of the Emir, and legitimize his claims to monarchical power, which never really existed before.”

But Dean Nonneman countered that Georgetown and the other Education City institutions provide need and merit-based scholarships and noted that only about one-third of their students are Qatari citizens. He believes that Qatar’s investment in education is a sound one that will indeed transform the society and serve as a model for the region.

“We provide a space to engage on critical issues and develop critical thinking,” he said. “Where that leads around the region, I can’t predict. We’re not interested in telling people how to think — we give people the tools to think for themselves, articulate those positions, and contribute to their societies.”