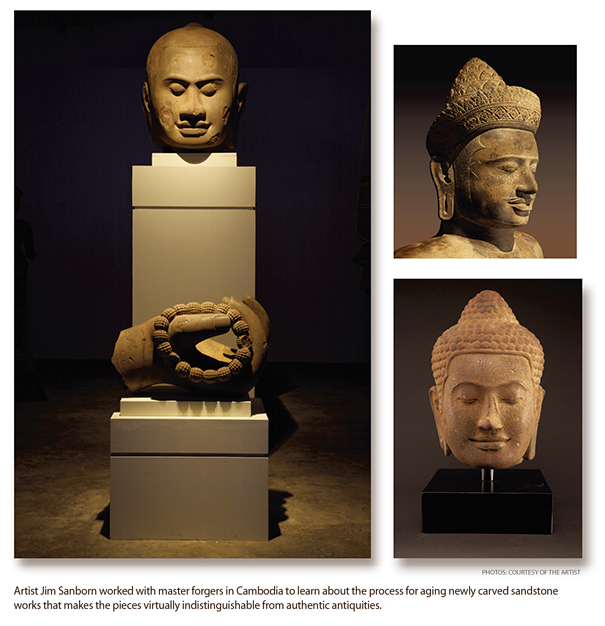 When we think of forged antiquities or artwork, they’re not exactly viewed in a positive light. At a minimum, forgeries are seen as an affront to “real” artists and the rarified world of art collecting. At their worst, forgeries can become entangled in a black market that trafficks genuine cultural artifacts looted from war-torn, poverty-stricken nations that rob people of their heritage and often fund criminal and terrorist networks.

But what if copying art is seen as a form of art in and of itself? After all, it takes masterful skill to forge a masterwork. In ancient Rome, for example, gifted copiers were seen as just that — gifted — whereas today they would be considered con artists.

Artist Jim Sanborn tests this theory and examines the power of forgeries for good in the latest exhibition at the American University Museum. “Without Provenance: The Making of Contemporary Antiquity” features a sculptural installation that offers a unique take on today’s art market, which often sells stolen or forged antiquities.

That market is being infiltrated by pieces of “murky provenance, repatriations, and questions of authenticity have increased dramatically,” according to Sanborn’s website, which explains the reasoning behind his exhibition. “The works in this installation are not museum shop ‘replicas’ because they are not cheaply mass produced. They are not ‘forgeries’ either because this implies that the pieces are offered for sale as genuine antiquities, which they are not. These pieces can however be called ‘high-end reproductions’ or ‘contemporary antiquities.’”

Sanborn — a D.C.-born sculptor best known for creating the encrypted “Kryptos” sculpture at the CIA headquarters in Langley — sought to uncover the complex and underappreciated technique behind forging antiquities. He worked with U.S. conservation experts and master forgers in Cambodia to learn about the process for aging newly carved sandstone works that makes the pieces scientifically and aesthetically indistinguishable from authentic antiquities.

“In order to dilute the criminal trade in looted objects, French antiquities conservation groups have already begun the process by bringing out many of these forgeries from Cambodia so they can be sold legally as expensive high-end reproductions, and buyers are there, buyers willing to purchase Khmer artworks for their beauty, not their age,” Sanborn’s website explains.

“Without Provenance” was originally going to focus on antiquities stolen or looted from archaeological sites in places like Egypt and Peru. Sanborn ultimately ended up choosing Cambodia because it was more accessible.

The antiquities Sanborn worked with were made of stone — antiquities impossible to date and impossible to determine when the stone was carved into sculpture. He had the stone sent over from Cambodia, with some slabs weighing as much as 10,000 pounds. He did everything he could to make them virtually unrecognizable from historic antiquities. He even learned tricks from the stone forgers. For example, he included an accompanying photograph on the wall that mimics the catalogue page found in an auction house.

“The auction page describes the artwork made and offers provenance for the work,” Sanborn said. “The exhibit is historically based.”

Sanborn creates an imagined world where skilled artists and craftsmen of modern-day Cambodia are understood for what they are — skilled artists and craftsmen in their own right. He envisions their work being bought for what it is (copies) and valued for what it represents (the beauty of past Khmer art). Sanborn also recognizes the added advantages of high-end reproductions: They can be legally purchased, are affordable and can easily be collected, even by the novice.

Sanborn said he would most like those who visit his exhibit to understand that the artists in Cambodia who carved pieces for him did not make “forgeries,” because that implies they’d be sold as genuine. Rather, he said these artists are “performing a great service.”

What was once decades ago a secret project, it is now known that the Cambodian government openly backs this reproductions industry, in large part because it supports the many Cambodians who were orphaned during the genocidal rule of the Khmer Rouge, which killed anywhere from 1.5 million to 3 million people. “Those children were trained to make high-end reproductions,” Sanborn noted.

Prior to this exhibit, Sanborn worked for a decade exploring his fascination with nuclear history, something he calls “very, very different” from his latest exhibit. In 1998, he visited the Trinity Site where the first atomic bomb was detonated, later taking multiple trips to Los Alamos, N.M., where he acquired the original parts, prototypes and lab equipment used to make the first atomic bomb. His resulting installation recreated the experience of splitting an atom.

While “Without Provenance” takes a different direction than his science-based works, Sanborn’s interest in archaeology and paleontology is not new. His father served as director of exhibitions at the Library of Congress. There, Sanborn got a firsthand experience that was unprecedented for a child (or any adult for that matter): In the 1960s, some of the Dead Sea Scrolls were sitting on his father’s desk. Sanborn had the opportunity to turn them over and examine them.

Yet “Without Provenance” doesn’t mark that dramatic of a departure from Sanborn’s previous physics-related work because it examines the connections between archeology and the art trade, just as his other work reflects on the relationship between science and technology.

Moreover “Without Provenance” continues Sanborn’s longstanding interest in exploring the deeper meaning of art, as opposed to its aesthetic qualities. While in graduate school in New York, Sanborn said he became interested in Arte Povera, an Italian movement that emphasized commonplace, pre-industrial materials over modernism and technology. The movement embraces minimal context and maximal content. “It’s become the focus in everything I’ve done,” Sanborn told us. “The message of what I’m doing is more important than the objects themselves.”

The artist said it takes about two years to come up with the idea for his next project. From there, each arc takes about 10 years. Sanborn has been at his Cambodian creation for seven years and is now taking the time to research what comes next.

Without Provenance: The Making of Contemporary Antiquity