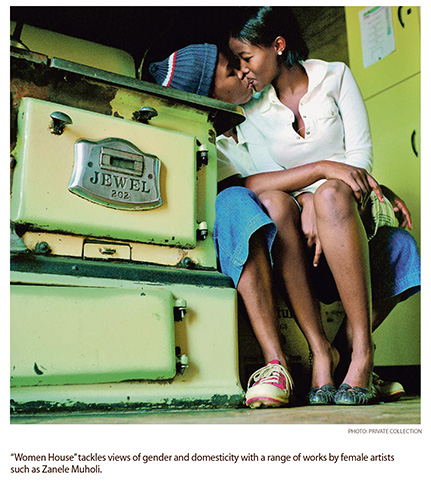 A woman’s place is in the home. Or so they say. The National Museum of Women in the Arts (NMWA) takes that sexist trope and turns it on its head with its latest provocative exhibition, “Women House,” which challenges traditional ideas about gender and domesticity.

Over 35 international artists, including Louise Bourgeois, Judy Chicago, Mona Hatoum, Zanele Muholi and Leticia Parente, use photography, sculpture, installation and video to reflect on and re-examine what “home” means to them. The museum will be the only American venue for the exhibit, organized by La Monnaie de Paris.

Orin Zahra, NMWA assistant curator, said the concept for the show rose from the need to revisit the relationship between gender and architecture. Organizers realized that there were no contemporary exhibitions that examined the topic in a broader way since 1972. That’s when the exhibition “Womanhouse” was developed by Judy Chicago and Miriam Schapiro and their female students at the California Institute of the Arts. They transformed a derelict Hollywood mansion with works that upended conventional ideas about the home as a feminine space, drawing national media attention.

“That installation serves as the inspiration for ‘Women House,’ which forms a sequel of sorts to its predecessor,” Zahra said. “Both of these exhibitions tackle the idea of women reclaiming a space from one that oppressed them to one that was empowering and liberating.”

This theme actually mirrors the history of the NMWA itself, which is housed in a former Masonic temple that had prohibited women from entering. Exhibition organizers felt it was a perfect platform for an exhibit that centered around women finding agency in their built environment through visual arts, Zahra said. 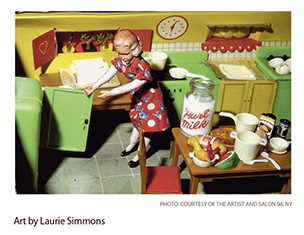 Zahra, who has a background in feminist art history from American University, was familiar with “Womanhouse” and its significance to the art world. “This new show enabled me to understand its far-reaching impact, even 45 years later,” she said. “I personally love seeing the connections between the younger generations of artists with the artists from the ’60s and ’70s avant-garde, as well as new ideas being explored in relation to the domestic space by emerging artists.”

“Women House” recasts typical ideas about women and family through a striking, evocative and eclectic mix of media. Eight sections examine themes such as “Desperate Housewives,” focusing on artists who rebel against the patriarchal system and clichés such as the housewife and the vixen; “Home is Where it Hurts,” which portrays domestic drudgery through dark humor and metaphor; “Femmes-Maisons,” which represents the maternal body as a nurturing, powerful but burden-filled haven; and “Mobile Homes,” which examines nomadism and exile.

Touching on some of these themes, Zahra noted that “Desperate Housewives” deals with the disillusionment of married life that women artists from the feminist avant-garde experienced in the ’60s and ’70s. Artist Cindy Sherman dresses up as a bored, lonely or sultry housewife in film stills, while Birgit Jürgenssen wears a stove-shaped apron for a play on the phrase “bun in the oven.” 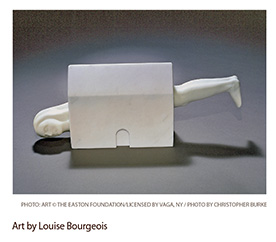 “A Room of One’s Own” takes a different approach, getting its name from an essay by Virginia Woolf to depict women melding into their surroundings, sometimes literally. In Francesca Woodman’s works, the women become an eerie extension of the home, as their bodies fuse into the architecture, becoming lost in the background. Zanele Muholi takes the opposite approach as a female couple in South Africa cuddles by their stove in a picture of intimacy that speaks to the home as a sanctuary from the judgment and chaos of the outside world.

Installation artist Pia Camil, who works in Mexico City, contributed to the show with her own personal take on the notion of home by weaving together T-shirts to form a curtain in a piece she originally designed for an exhibit in Cologne, Germany.

“The T-shirts come from secondhand markets in the suburbs of Mexico City, specifically the area of Iztapalapa,” Camil said of her cross-cultural work.

Camil said she hopes that visitors are drawn not only to content of her work, but also to the process by which it was created — through a collaborative effort with a family of women seamstresses headed by a self-taught and fierce matriarch. “Working closely with them has made me realize the importance of generating networks and systems of support with other women and how that can positively impact the work,” she said.

Camil also believes that although the exhibit is made by women and about women, viewing art should not be dictated by gender. “I think that every person has a different reaction depending on their life situation and experience,” she told us.

With movements like #MeToo and Time’s Up casting a harsh light on the treatment of women and questioning their roles in society, Zahra said “Women House” will resonate with people looking for a creative twist on the timely, weighty issue of gender in the 21st century. “It’s a perfect moment for a show like this that demonstrates ongoing, persistent problems that women face in private and public spaces,” she said. “This is also a time to celebrate women, their strengths and perseverance in overcoming the obstacles they have faced in life.”